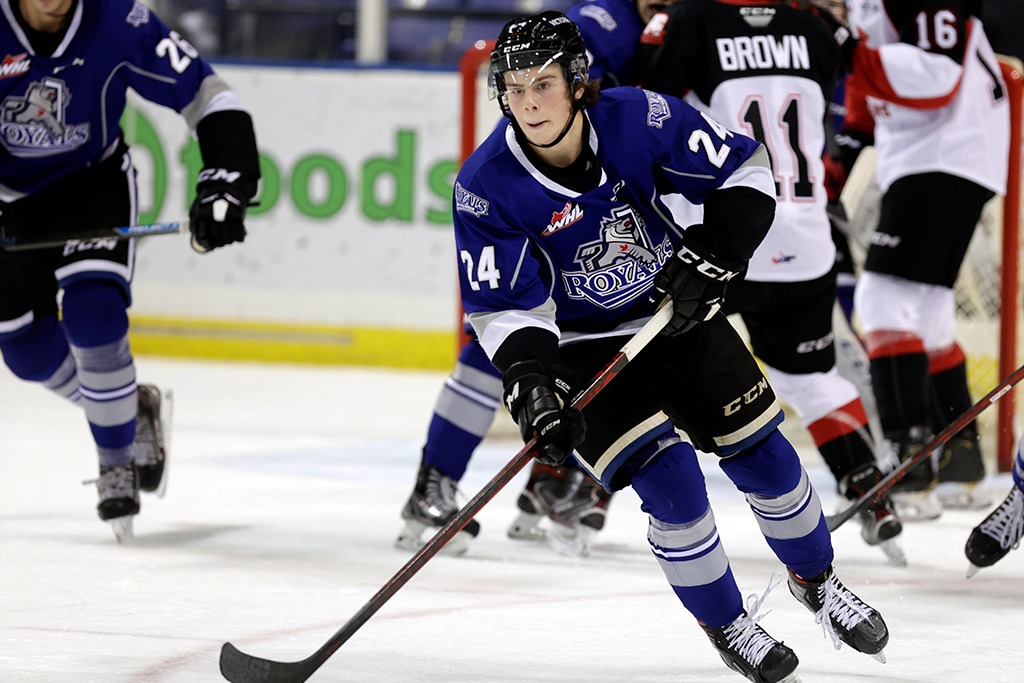 The Victoria Royals fell 4-1 to the Prince George Cougars in the fourth game of their six-game series.

There were some new faces tonight for the Royals starting with Campbell Arnold in net.  The Cougars came out hard looking to get on the board first and after several attempts, Liekit Reichle scored to make it 1-0 Cougars. The Royals went on the power play for checking to the head with 12 minutes left into the first. After working the Cougars net, Carter Briltz scored his first WHL goal assisted by Kalem Parker and Jason Spizawka to make it 1-1. Both teams continued to be aggressive and push towards the net, but the period ended in a tie.

The second period was a game of back and forth between two defensive hard-hitting teams. Campbell Arnold remained calm and controlled in net after making some remarkable saves to keep the game tied at 1-1.  It wasn’t until Blake Eastman scored on a rebound with three minutes left that the Cougars would get past Arnold to make it 2-1. Despite a last-minute effort by Riley Gannon, the period ended 2-1 in favour of the Cougars.

Right off the bat in the third, the Cougars were applying pressure to the Royals to get their insurance goal. The Cougars were able to get one past the Royals defence on a shot from Koehn Ziemmer to make it 3-1. In the final two minutes of the game, Campbell Arnold left the net for the Royals to give them the extra man advantage, however it was Prince George who would score the empty netter to end the game 4-1.

Campbell Arnold arrived in Victoria earlier this morning and had an impressive first night in net.

“This is close to home for me, so it was nice to play here. I grew up watching the Royals so playing here is pretty surreal,” Arnold told media. “I think I played well. We’re getting used to each other and the communication part will come. The whole team played well tonight.”

Carter Briltz, who scored his first WHL goal and the only goal of the night spoke to media about the one-timer.

“There was a little shock at first, but then it set in and it was a great job from Parker up top and a nice little deflection,” Briltz said. “I think we played really well. We’ll fix up a couple of mistakes and be ready for next game.”

“One of the things our guys did really well tonight was protecting our net front which gave us more puck possession, fewer chances against and less zone time,” Price said of the team’s performance. “We did a good job getting in front of Gauthier so if we can increase that even more and be tougher to move in the offensive net, I think we’ll have more chances.”

The Royals embark on a four-game road trip starting Tuesday in Prince George before heading to Kamloops on Friday and Kelowna on Saturday.  The team returns home on November 5th and 6th to face Kamloops.

For tickets, visit Select Your Ticket, call the Select Your Tickets box office or stop by the Save-on-Foods Memorial Centre Ticket Office Wednesday through Friday between 11 a.m. – 4 p.m. Ticket prices start at $25 for students, seniors and corner seats, $30 for sides and ring and go up to $39 for Premium Club seating.