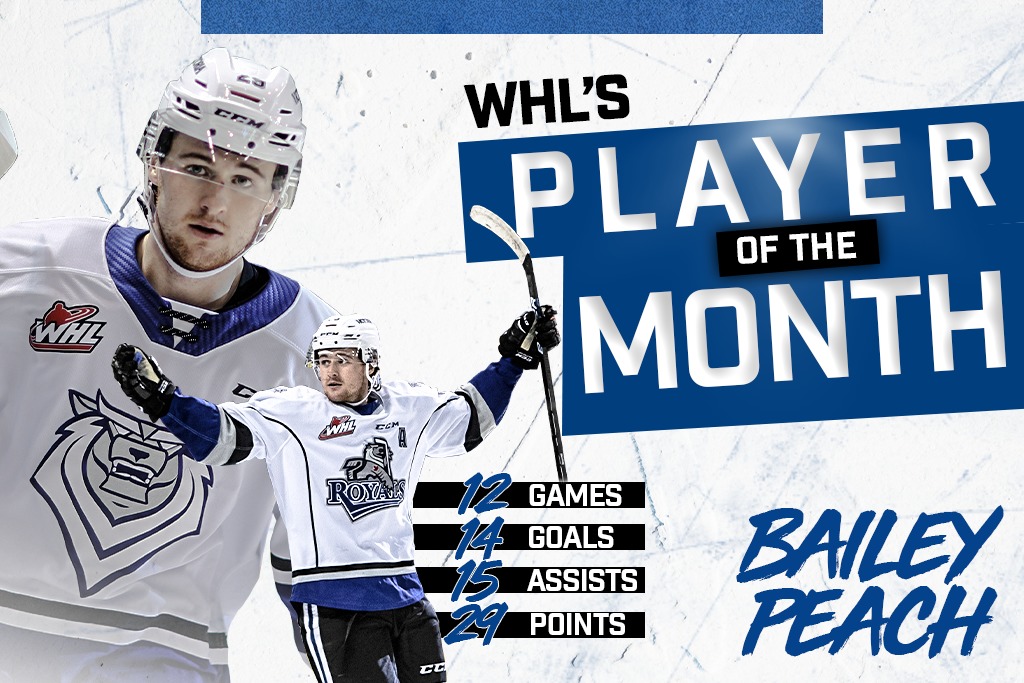 The WHL announced today that Victoria Royals forward Bailey Peach has been named the McSweeney’s WHL Player of the Month for December.

Yesterday, Peach was named WHL Player of the Week after leading the WHL in points for the week of December 27th – January 2nd. The 20-year-old had a record setting week that included a lacrosse-style goal, a hat-trick and a seven-point game, a new franchise record for the Royals. Peach also became the fourth WHL forward to register seven points in a WHL game since 2010. In total, Peach collected 13 points last week on eight goals and five assists.

As someone who had a slower start to the year, Peach has been drawing attention from teams across the WHL this month for the incredible numbers he has put up. The Falmouth, NS native has a division leading 44 points so far, 29 of which came in December. In total, he collected 14 goals and 15 assists in 12 games.

The humbled forward is proud to have been recognized for his hard work and to have been named the McSweeney’s WHL Player of the Month.

“It’s an honour to be recognized for my hard work and talent. My work isn’t done,” Peach said. “I want to continue to help the Victoria Royals win games. We have a team of talented players and great staff that will contribute to this.”

Assistant GM and Associate Coach J.F. Best is proud of the recognition Peach has been receiving and knows he will only continue to preform well.

“It’s great for Peacher to earn some recognition across the league. We’re very happy for him,” said Best. “Since he joined us, coming from the QMJHL, he has worked really hard to establish himself as a top end player in the WHL. Over the course of the past month, his point production and some of his highlight reel offensive plays have garnered some deserved attention across the league. Those who have had the chance to watch him closely know that his game is very well rounded and that he is driven by winning more than anything else.”

The Royals are also offering two holiday ticket package for fans this season. Buy four vouchers for $70 or six for $100 and receive a special Royals gift. This offer is valid until January 31, 2021.