Behind the Bench – “Attack of the Flying Stuffies” 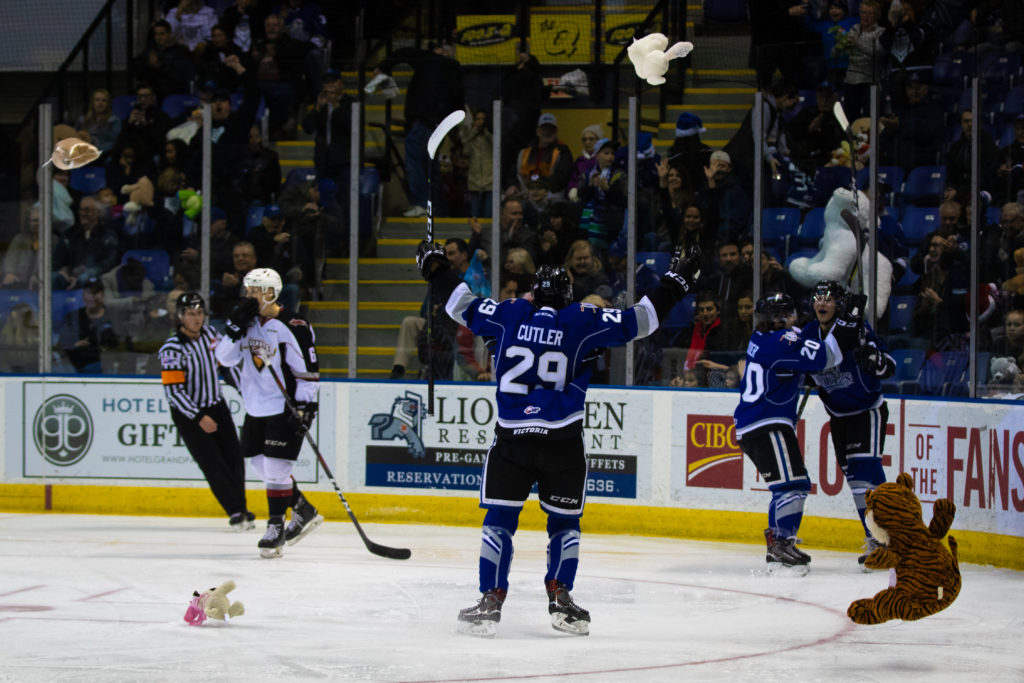 • Vancouver Giants (21-7-2) at Victoria Royals (15-13-1) – Saturday December 15th 2018
• Teddy Bear Toss Night and the last home game before the Holiday Break
• 6,812 fans have packed into SOFMC. Not quite a sell-out, but over capacity if you count all the stuffed animals that snuck in without a ticket!
• D-Jay Jerome turns up the volume, potting two goals and earning himself the first star in a 4-2 win over the rival Giants.

On nights like the Teddy Bear Toss (TBT) the pre-game buzz isn’t just limited to the fans filing into the rink, it’s in the dressing room as well. The guys tend to show up a little earlier than they normally would and seem to have a little more jump in their step. There’s more chatter in the room than usual too.

Once the crowd starts to grow, and the players notice all the stuffies ready to be tossed, the pace of the on-ice warmup gets a little faster and passes a little crisper. Then after warmups, there’s even more banter in the room, much of which is focused around who will ‘make it rain’ by scoring the night’s Teddy Bear Toss Goal (TBTG).

At about the 8 minute mark before re-taking the ice, the starting lineup is announced to the players. At this point, like every game, the players are really amped up. But on TBTN, it’s next level. No pre-game speech necessary… Everyone’s ready for puck drop!

As to be expected, the players waste no time getting the party started. With the game less than 5 minutes old, the play begins behind our net with former Royals defenseman Jameson Murray (Murr) receiving a D2D pass. In the bottom right of the screen, you’ll notice #29 Brandon Cutler (Cuts), swing and gather speed. Murr sees Cuts and delivers a cross-ice bank pass, which Cuts does a good job of receiving in stride. Cuts maintains enough speed to be able to drive around the strong-side Vancouver defenseman, which causes the weak-side defenseman to try and cover for his partner. This allows former Royal D-Jay Jerome to drive the weak-side post and find open space for the pass from Cuts. Recognizing that the Vancouver goalie has to push laterally to cover the weak-side portion of the net, D-Jay catches and quickly releases the shot to beat Tendeck on the short-side before he is able to make it across. Cue the BEARS!

On TBT night, everybody from the players, trainers, coaches, managers, front office staff, executive staff; we all feel and love the palpable anticipation of the fans for the TBTG. Every shot directed at goal might be the one that triggers the avalanche of stuffies onto the ice. You can hear the players on the bench trying to will the puck into the net on every shot. They are all itching to jump over the boards to celebrate as a team amongst the raining bears. That night, over 3500 bears flooded the ice which is a proof of the outstanding support of our fans for this great tradition. All of the stuffies were donated to the Mustard Seed Foundation and other local charities. For such a great cause, the players, coaches, and trainers, don’t mind getting pelted by the odd bear as they fly towards the ice…

We miss you Victoria – See you soon!