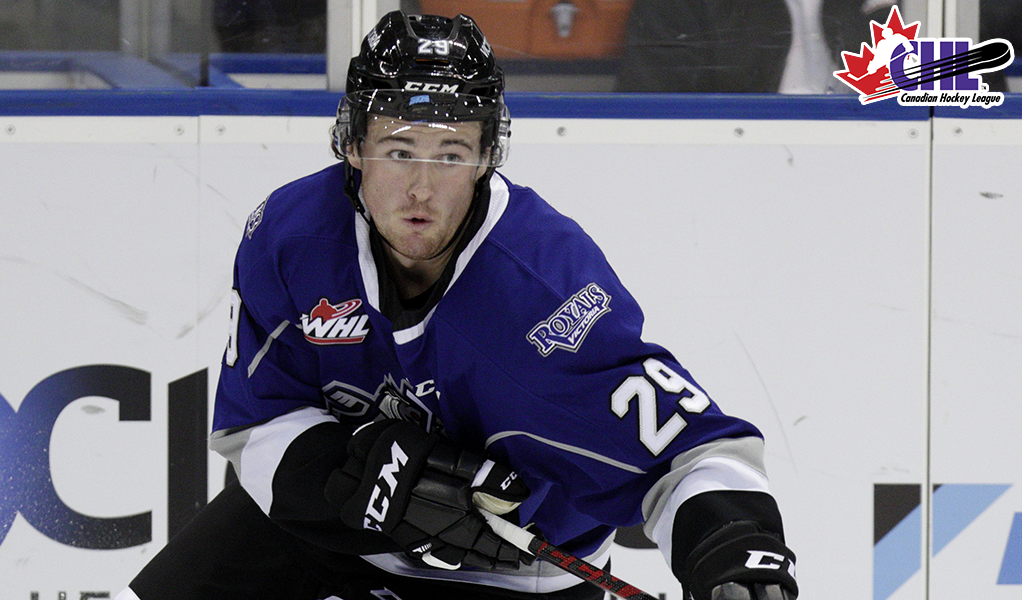 Offering a glimpse of the top performers from coast to coast, CHL Stats Snapshot continues with a look at the league’s most prolific producers in December, where seven players closed out the month with 19 or more points:

Dominating in December to the tune of 29 points counting 14 goals and 15 assists through a dozen appearances, Victoria Royals overage left-wing Bailey Peach led the way on the month, putting up at least one point in all but a single contest. The month was highlighted by an incredible seven-point showing coming against rival Vancouver in which Beach netted his first hat-trick of the season alongside four assists en route to a 7-3 victory. Skating in his first season with the Royals after previously playing four campaigns in the QMJHL, the year has seen Peach amass 44 points in 30 games, putting him just eight points back of the league lead.

BAILEY PEACH DID THE *OTHER* THING!!!!

Sitting tied for second in team scoring, Everett Silvertips rookie right-wing Niko Huuhtanen impressed in December where through 13 showings he collected 25 points counting 13 goals and 12 assists. In all, Huuhtanen’s top performance of the month came December 28 against Prince George where he scored two goals and two assists, then matched that total the next night, once again versus the Cougars. A late-round selection by the Tampa Bay Lightning in last summer’s NHL Draft, the 2003-born Finland native joined the Silvertips after being chosen second overall in the 2021 CHL Import Draft.

You know when a jet flies over head and you can see the trail behind it?

Moving up in the offensive ranks with many a teammate away from the squad to participate at the World Juniors, Edmonton Oil Kings overage right-wing Josh Williams made the most of the month as through 10 outings he amassed eight goals and 12 assists, moving him into first in team scoring with 44 points. In all, December was highlighted by a 6-5 final against Regina in which Williams secured his second hat-trick of the season alongside a pair of assists. The Langley, B.C., native also closed out the month in recording at least one point in his last six outings, totaling six goals and nine assists.

Shifting to the OHL, December saw Windsor Spitfires second-year centre Wyatt Johnston flash the offensive magic that made him a first-round selection by the Dallas Stars in last summer’s NHL Draft. In all, through eight games, Johnston dominated in collecting seven goals and 12 assists for 19 points, underscored by a season-high six-point night coming against Sarnia en route to a 7-5 road win. On the season, Johnston now headlines the Spitfires with 46 points through 27 appearances, production that puts him 19 points north of the team’s next highest scorer.

Wyatt Johnston (@johnston0055) all over the scoresheet for @SpitsHockey ✈️@DallasStars prospect now has points in 14 straight games 🎥 pic.twitter.com/EZwX4xispr

Excelling on and off the ice, Charlottetown Islanders veteran centre Patrick Guay wrapped up December with 19 points counting eight goals and 11 assists coming in nine games, a stretch which included his second four-point night of the season of two goals and two assists to lead his squad to a 7-2 road win over Rouyn-Noranda. In all, Guay now stands at 47 points through 31 games this season, production that puts him just three points back of top spot league wide. Elsewhere, Guay also shined in the classroom as he was named the QMJHL’s Scholastic Player of the Month for December.

With a 💣 of a shot it shouldn't surprise anyone that Patrick Guay leads ALL #CHL scorers with 24 goals#CHLTVGOTW | @IslandersHKY pic.twitter.com/Ji6EdZqFJy

Skating in his first season in North America, Russian-born left-wing Matvey Petrov of the North Bay Battalion has had little difficulty in adjusting to his new environment, where through December he continued to shine by registering four goals and 15 assists for 19 points through nine games. In all, the month saw Petrov twice finish with four points, bringing him to four total on the season. Originally chosen atop the 2020 CHL Import Draft then in the sixth round by the Edmonton Oilers in the 2021 NHL Draft, Petrov has collected 52 points through 31 games this season, putting him just three back of teammate Brandon Coe for first in OHL scoring.

Russell dishes and Petrov devours 🥩@EdmontonOilers prospect bags his 20th of the season to give the @OHLBattalion the lead 🎥 pic.twitter.com/PrwcXjHQHo

Forming part of a well-balanced offensive attack that leads the Everett Silvertips, veteran centre Ryan Hofer made impressive strides in December as on just a lone occasion he was held off the scoresheet before ultimately wrapping up the month with seven goals and 12 assists for 19 points through 13 games. Twice in December, Hofer finished with three points, including a two-goal, one-assist effort versus Prince George in late December that earned him second-star honours in a 4-2 road win. In all, Hofer now stands fourth in team scoring with 32 points, putting him just eight back of the team lead.

Before the New Year arrives, let's look back at the 10 best goals from the first half of the season!

What's been YOUR favorite goal this season?#LetsGoTips x #HappyNewYear pic.twitter.com/Y1RQ4hqVxp