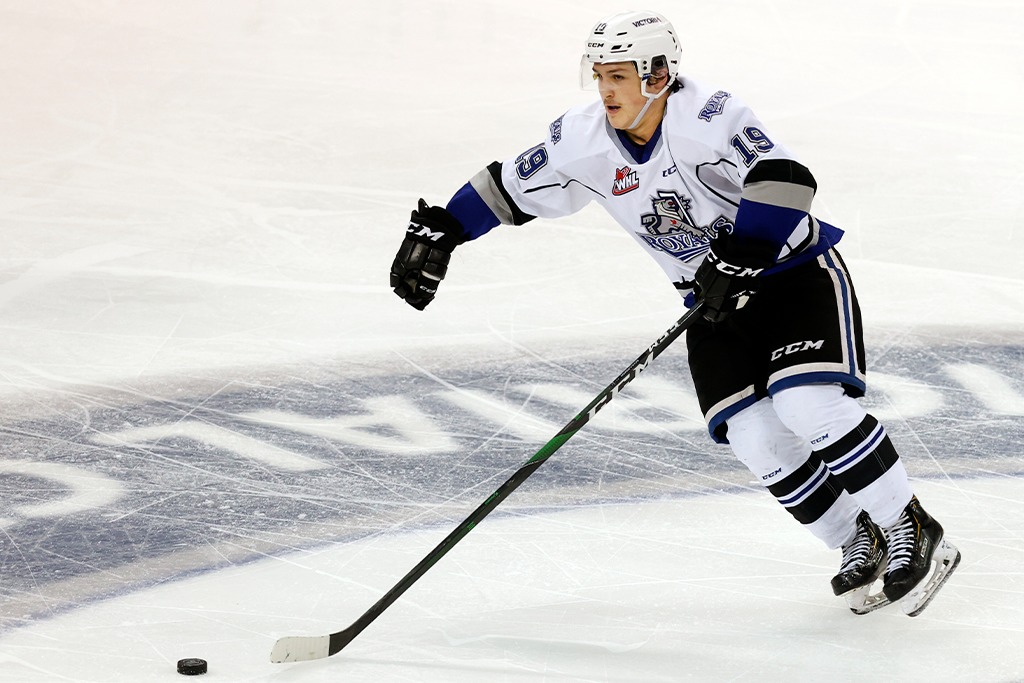 In their final preseason game of the 2021-22 season, the Royals lost 8-5 to the Prince George Cougars.

The night started off with a first for the team with the starting lineup featuring two sets of brothers, Victoria born Jason and Ryan Spizawka and Saskatchewan natives Anthony and Wyatt Wilson. Both Spizawka brothers are in their second year with the Royals while Wyatt Wilson joined the club earlier this week alongside his brother Anthony who was drafted by the Royals in the 2020 WHL draft.

“It was very cool to see both the Spizawkas and the Wilsons on the ice,” GM and Head Coach Dan Price said of the lineup. “It’s definitely a special night for our team, the organization and their families.”

Both teams came into the first period looking to finish out the preseason strong, but Prince George would get on the board first with a snipe from the right side of the ice from Cougar forward Johnny Hooker at 6:18. Minutes later the Royals scored a powerplay goal to tie it up from Brayden Schuurman at 11:46 with an assist from Ty Yoder and Kalem Parker. After a penalty to Ryan Spizawka for delay of game, the Cougars came on hard and were able to get one past the Royals with a goal from Caden Brown at 14:25. The Cougars would get another goal late in the first by Hudson Thornton 18:17 to make the score 3-1 after 20 minutes of play.

The second period started off with a goal from Cougar Majid Kaddoura 55 seconds in. Things were getting heated between the teams halfway through the game with both teams taking unsportsmanlike conduct penalties. With a four on three in favour of Royals, Trent Crane put the Royals back on the board with an assist from Brayden Schuurman at 9:13 to make it a 4-2 game. With 5:22 left in the second, Cougar Carter MacAdams extended the Prince George’s lead over the Royals, but the Royals fought back to make it a 5-3 game with a goal from Ty Yoder assisted by Keanu Derungs.

The Royals went into the third on a powerplay but were unable to make headway. After 5:18 of play, the Cougars made it 6-3 with a goal from Cougar Carter MacAdams. The Royals were quick to rebound with a goal at 9:01 from Anthony Wilson assisted by his brother Wyatt Wilson and Carter Dereniwsky which was answered with a goal by Cougar Blake Eastman at 10:59. With just under four minutes left to play, Royals Carter Dereniwsky scored the fifth goal for the Royals which was answered by MacAdams on an empty net for his third of the night to finish out the game with a score of 8-5.

Despite the loss, Price believes there is plenty of positives to take away.

“I wish we had a fourth game. There’s a lot we can clean up. A lot of identifiable, fixable things that we could definitely clean up,” said Price. “For the most part, despite the fact Prince George scored some of those opportunistic goals, I thought we pushed back well. There was never any quit, the competition level was there, and the guys didn’t get down or deflated. The scoring chances were even, shots were even, so if we can clean up fixable mistakes there’s a lot of good stuff there.”

The feelings seem to echo in the locker room.

“We were talking about it in the room after the game, the score line as we call it, is what it is. We played really well tonight. A couple mistakes, easy fixes and I can’t wait to play them again,” said Ty Yoder who had a goal and an assist tonight.

The Royals open their season next Saturday, October 2 at 7:05 pm home versus the Vancouver Giants. Tickets go on sale Monday for the home opener.