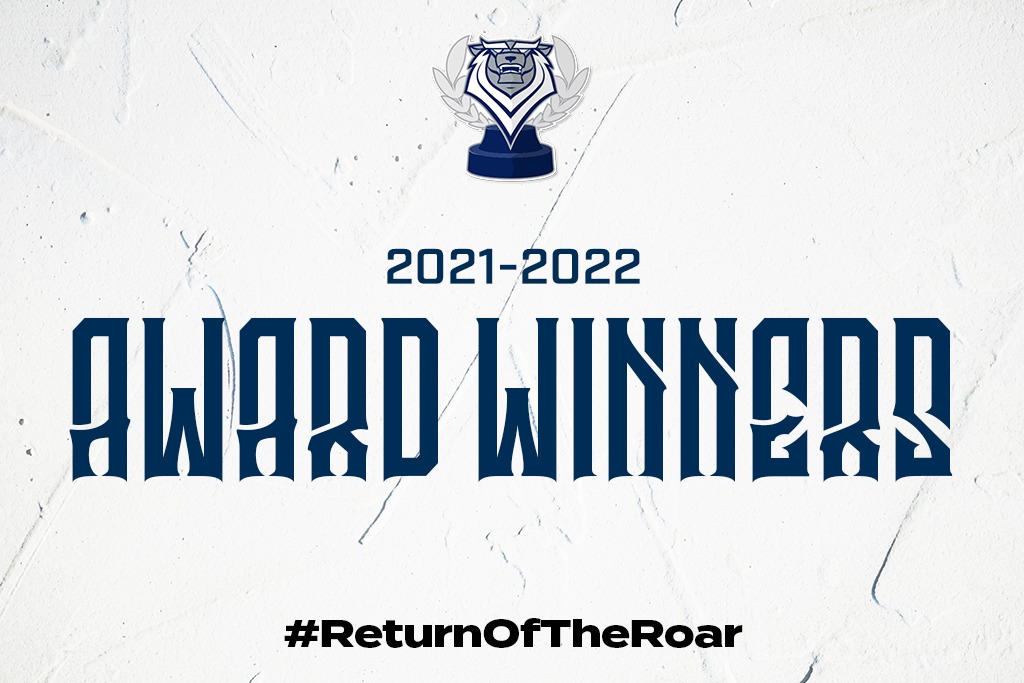 The Victoria Royals celebrated the best of their 2021-2022 season during their annual awards ceremony during a private team banquet on Thursday.

Fizer was named the winner of both the Enex Fuels Most Valuable Player Award, and Gablecraft Homes Most Dedicated Player Award–an honour he shared with defenceman Gannon Laroque.

Meanwhile, rookie goaltender Tyler Palmer collects a pair of awards of his own, receiving Showcase Awards Rookie of the Year Award and the Shatterbox Hardest Worker Award.

The Fernie, BC native leads all rookie net-minders with a .909 save percentage while posting a 3.48 goals against average and a 16-22-3 record over 43 appearances.

Forward Bailey Peach also doubled up on hardware, collecting The Keg Fan Choice Award and the Mayfair Optometric Top Scorer Award after leading the team with 77 (36 goals, 42 assists) in 64 games.

Gannon Laroque was honoured with Wilson’s Transportation Top Defenseman Award along with sharing most dedicated player honours with Fizer. He led all Royals’ blueliners and ranked third on the team with 51 points on nine goals and 42 assists in 61 contests.

Forward Igor Zborovskiy took home the VicPD Community Service Award for his charitable work with the Island Kids Cancer Association, to whom he donated half his monthly stipend throughout the season.

Victoria native Jason Spizawka was the top performer in the classroom for the Royals and received the Jo Ann Thompson Foundation Scholastic Player of the Year Award in recognition.

Finally, the Pepsi Unsung Hero Award was given to forward Riley Gannon, who ranked third on the team with 21 goals, while adding 13 assists for 34 total points.

“Thanks to our award sponsors for their tremendous support of the Royals organization and our players. We’re very proud of our group, and this year’s award winners reflect the work ethic, perseverance and commitment that all of our players pride themselves on,” said Head Coach Dan Price. “We also want to thank all of our players’ families and billet families for their support and for making tonight such a special team dinner. Sincere thanks and congratulations to our twenty year old players as well. It was a great night to celebrate as a Royals family and we look forward to sharing more great moments together.”