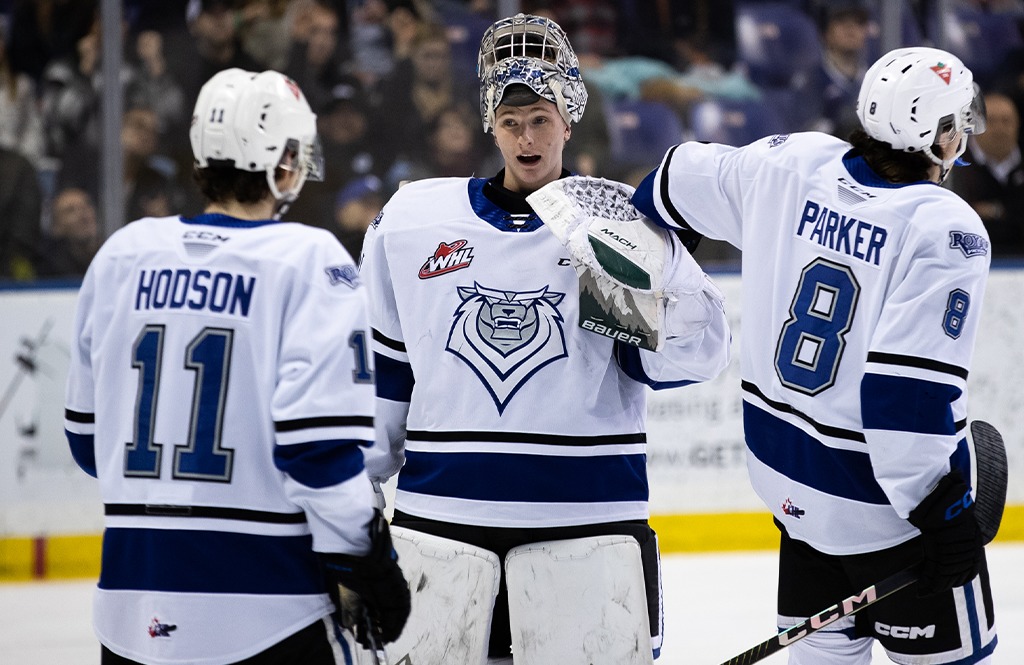 Goaltender Braden Holt stopped every one of the 29 shots he faced to lead the Victoria Royals to a 4-0 victory over the Kelowna Rockets on Friday night at the Save-On-Foods Memorial Centre.

It was the third shutout of the season and second as a member of the Royals for the Bozeman, MT product, who has earned a 4-0-0-1 record since joining Victoria late last month.

Holt credits his success to the close relationship he’s developed with his teammates.

“I think I just click with the team really well,” said Holt postgame. “We’re a tight-knit group, I never felt like the new guy, and that starts in the locker room. Everybody has made me feel so welcome and I just want to go out and play for them, just like they want to play for me.”

General Manager and Head Coach Dan Price has been impressed with the 19-year-old’s work ethic and performance since he arrived on the Island.

“He’s an incredible person,” said Price post-game. “He’s very humble, hardworking, respectful, very prepared. He has respect for the game of hockey as well, he works so hard at it…His biggest trademark is he always makes the big save at the big time. That key moment when you need it, he’s always there.”

Forwards Matthew Hodson and Jake Poole were the top point-getters for the Royals in the win, each recording a pair of assists.

Kelowna (13-22-3-0) starting goaltender Talyn Boyko made seven saves on nine shots before being replaced by backup Jari Kykkanen, who stopped 29 of 30 after entering the game late in the first period.

Victoria (11-25-3-1) forward Reggie Newman (4) would give the home side an early 1-0 lead on a goal at the 8:16 mark of the first period, assisted by forwards Matthew Hodson and defenceman Gannon Laroque.

The Royals would double up their lead near the end of the frame, with forward Teague Patton (9) striking at 14:07 to put his team up 2-0 headed into the second. Hodson would pick up his second point of the night with the secondary assist on the goal while forward Jake Poole collected the primary assist.

Victoria’s 2-0 lead would hold until deep in the third period, when forward Riley Gannon (11) added an empty netter – assisted by Jake Poole – to put the game out of reach at the 18:58 mark and bring the score to 3-0.

Royals forward Ryan Spizawka (1) would add one more for good measure at 19:13 of the third, tying the bow on a 4-0 victory for Victoria. Forwards Teydon Trembecky and Luke Rybinski would collect assists on the goal.

The Royals and Rockets will wrap up their two-game set tomorrow night, with puck drop set for 6:05 pm at the Save-On-Foods Memorial Centre in Victoria. The team will be celebrating Lunar New Year with specially designed uniforms that will be worn during Saturday’s contest.

The jerseys feature symbols and iconography of Chinese culture associated with the Lunar New Year, and are styled in the lucky colours of red and gold alongside the usual Royals home white.

The game is being sponsored by Fancy Ching Wealth Management. Additionally, the Fancy and David Foundation will be making donations of $10,000 to the Victoria Chinese Public School and an additional $10,000 to Big Brothers Big Sisters of Victoria Capital Region at the game.

An online auction will also be held to give fans a chance to purchase the one-of-a-kind Lunar New Year jerseys. All proceeds from the auction will go to support the Victoria Chinese Public School. Bidding has now opened and will conclude on Jan. 21 at 11:45 pm.