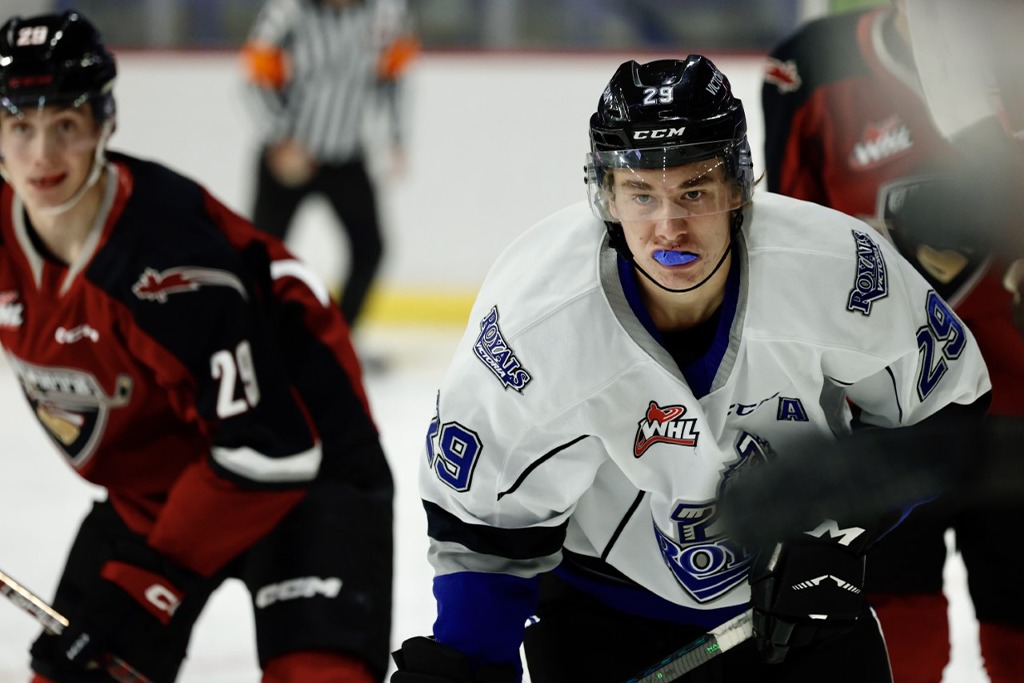 Forward Teague Patton scored 57 seconds into overtime to lead the Victoria Royals to a 3-2 win over the Vancouver Giants in WHL preseason action at the Langley Events Centre on Sunday.

The game-winner was Patton’s second of the game and third of the preseason after he scored in Victoria’s game against the Prince George Cougars on Saturday.

The Kelowna, BC product is one of the newest additions to the Royals’ roster, having been acquired by the club in a trade with Medicine Hat earlier this summer.

Assistant Coach Morgan Klimchuk has been impressed with the way Patton has gelled with his new club:

“There’s always concern with that when you bring a new guy in,” said Klimchuk. “How he’s going to fit in, who he’s going to fit in with, but he’s done a good job of that, found some good chemistry with guys and hopefully that continues to grow over the preseason.”

Forward Carter Dereniwsky was another top performer for Victoria in the win, tallying two points on a goal and an assist.

Campbell Arnold and Jayden Kraus split time in net for the Royals, with Arnold stopping 15 of 17 shots against during the first half of the game and Kraus turning away all 11 shots faced.

With back-to-back wins to start the preseason, Coach Klimchuk is satisfied with the way the players are coming together:

“I was pretty happy with it,” said Klimchuk. “A lot of guys are getting their first taste of it and as a group we had contributions right through the lineup – older guys stepping up when we need it and younger guys contributing as well.”

Forwards Julian Cull and Samuel Honzek scored the two goals for Vancouver, while starting goaltender Jesper Vikman made 17 saves on 20 shots in the loss.

Vancouver forward Julian Cull would open the scoring at the 1:50 mark of the first period to put Victoria in a 1-0 hole early in the contest.

That lead would last until the 19:24 mark of the first when Royals’ forward Carter Dereniwsky would even the game with a backhanded tip-in off a picture-perfect pass from centreman Brayden Schuurman, evening the game at 1-1 entering the second.

The second period started in a similar way to the first, with Giants’ forward Samuel Honzak putting his team up by one with a goal at the 6:16 mark.

Royals’ forward Teague Patton would then score the tying goal and first of the night at 13:55 of the frame, sending home a rebound off a shot from linemate Tanner Scott. The game would head to the third with the score tied.

Overtime would be needed to decide this one after the third period passed with no goals from either side and regulation ended with a 2-2 draw.

Teague Patton would play the hero on Sunday, scoring the game winner and second of the game at the 0:57 mark of overtime off a pass from Carter Dereniwsky, handing the Royals the 3-2 victory.

“Tonight’s game was very physical and a good test for all of our age groups and positions,” said General Manager and Head Coach Dan Price. “I felt that we improved as the game went on and our goaltending was excellent again. We’ll trim our roster now as some players head back to their U18 teams, and as Brayden Schuurman and Wyatt Wilson head to their respective pro camps. We’re looking forward to two more good challenges this week in the Okanagan and to continuing to build our team chemistry.”

The Royals will look to stay undefeated in the preseason as they head to the Okanagan to play their final pair of exhibition contests against the Kelowna Rockets on Tuesday, Sept. 13, followed by the Kamloops Blazers on Wednesday, Sept. 14.

Victoria will open its 2022-2023 regular season on Saturday, Sept. 23 at home against the Spokane Chiefs.