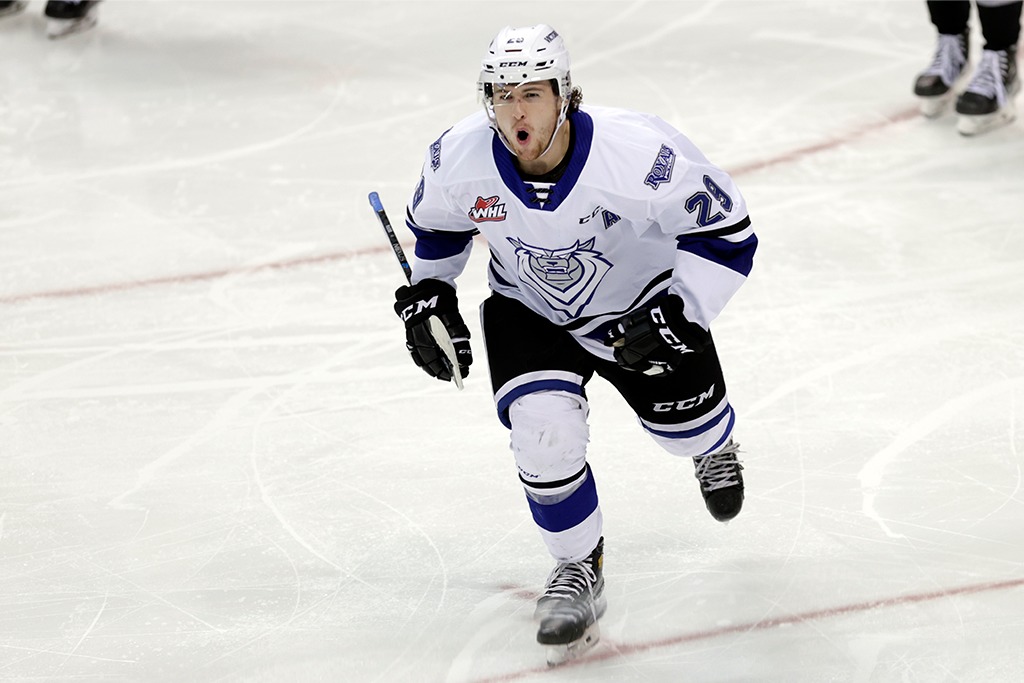 The Victoria Royals have swept the Vancouver Giants in a three game series with a 7-3 win on home ice.

Tonight’s win was the Royals (12-13-4) sixth consecutive against the Giants (14-16-1) and moved the team into 7th place in the West, one point ahead of the Prince George Cougars and one point behind the Vancouver Giants.

Veteran Bailey Peach had another spectacular game, scoring a hat trick, taking the first star of the night and breaking the team’s franchise record for points in a game with seven. Brayden Schuurman was also a huge part of the 7-3 win, earning him the second star of the game for his two goals and an assist while Gannon Laroque took home the third star for his three assists this evening.

“It was just one of those nights where everything was going right. I did not know it was a franchise record until after the game. It’s pretty crazy,” Peach told media post game.

Swiss National Keanu Derungs rejoined the team tonight after coming home from the World Junior Championship. The 19-year-old made it back just in time to score two goals this evening to contribute to the Royals win.

When discussing the momentous occasion for Peach, GM and Head Coach Dan Price pointed out just how good of a player the native of Falmouth, NS is.

“To have the franchise record, it’s a great legacy for him and he’ll have that forever. With Peach, it’s the way he does it,” said Price. “He’s blocking shots, finishing checks, working hard on the penalty kill. He plays a pro style 200-foot game. It takes work to get to that point and it takes character.”

The first period opened with a penalty to the Giants 20 seconds in, putting the Royals power play unit to the test. After a minute and 30 seconds, Peach and Laroque found Derungs for the power play goal to put Victoria up 1-0. Despite the Giants leading in shots, the Royals kept pressuring until Schuurman connected with Peach and Tanner Scott to make it a 2-0 game five minutes later.

The Giants had two power play opportunities in the first period when Victoria was penalized for a tripping and too many men on the ice, but it was the hot stick of Peach that was able to score shorthanded to make it a 3-0 game to end the first.

Julian Cull finally got Vancouver their first goal in over 80 minutes of play against Victoria after besting Campbell Arnold four minutes in. A minute later, Victoria’s Justin Kipkie took a penalty for tripping to put the Royals on the penalty kill. Peach, who had already scored short handed, was able to steal the puck to try for his second shorthanded goal of the night when he drew a penalty shot. The 20-year-old went wide of the net, stickhandling his way in and scored giving the Royals the 4-1 lead.

At the same time, Laroque was sent to the penalty box for spearing to give the Giants a 5-3 advantage, but the Giants could not capitalize. Halfway through the spearing call, Vancouver’s Alex Cotton took a slashing penalty allowing Victoria’s power play unit to score again on another goal from Schuurman assisted by Laroque and Peach. The scoring frenzy was not over though when Cole Sheppard of the Giants took a hard shot to the net narrowing the lead to 5-2 to end the second.

This time, it was the Royals who started the period with a penalty after Devin Aubin took a penalty for hooking. This was Vancouver’s sixth power play of the night and this time they were able to connect for a goal by Jaden Lipinski to make it a 5-3 game.

Just when it looked like the game was calming down, Aubin and Schuurman found Peach who scored the third hat trick for the Royals this season. Almost 45 seconds later, Derungs scored his second of the night on a tip in from Laroque and Peach for the third power play goal, putting the Royals up 7-3. Victoria continued to apply pressure until the final seconds of the game, stopping Vancouver from scoring, to end the game 7-3 in a sweep for the Royals.

In net tonight for the Royals was Campbell Arnold who made 35 saves on 38 shots. Will Gurski was in front for the Giants, successfully stopping 24 of 31 shots on goal.

The difference in tonight’s game was the way the team worked together to defend the puck, a point which Price says was something they wanted to do tonight.

“The coaches made a note, but it was really the players in the room that embraced it. There were a lot of blocked shots in the first period that helped us gain our traction, a lot of huge wins by Ryan Spizawka and Keanu Derungs who laid out for win. That was playoff calibre shot blocking in the first period and you can see how much it means for the team,” Price said.

The Royals now have three away games when they travel to Kelowna on Saturday for a mid-day game. Next weekend, the team will be in Prince George to face the Cougars for the first time in the new year.

The next Royals home games are January 11th and 12th against the Spokane Chiefs. These games were originally scheduled in November but postponed due to the pandemic. On January 11, the Royals will host the Front Line Workers Appreciation game and a Superhero Salute on the 12th.

The Royals are also offering two holiday ticket packages for fans this season. Buy four vouchers for $70 or six for $100 and receive a special Royals gift. This offer is valid until December 31.