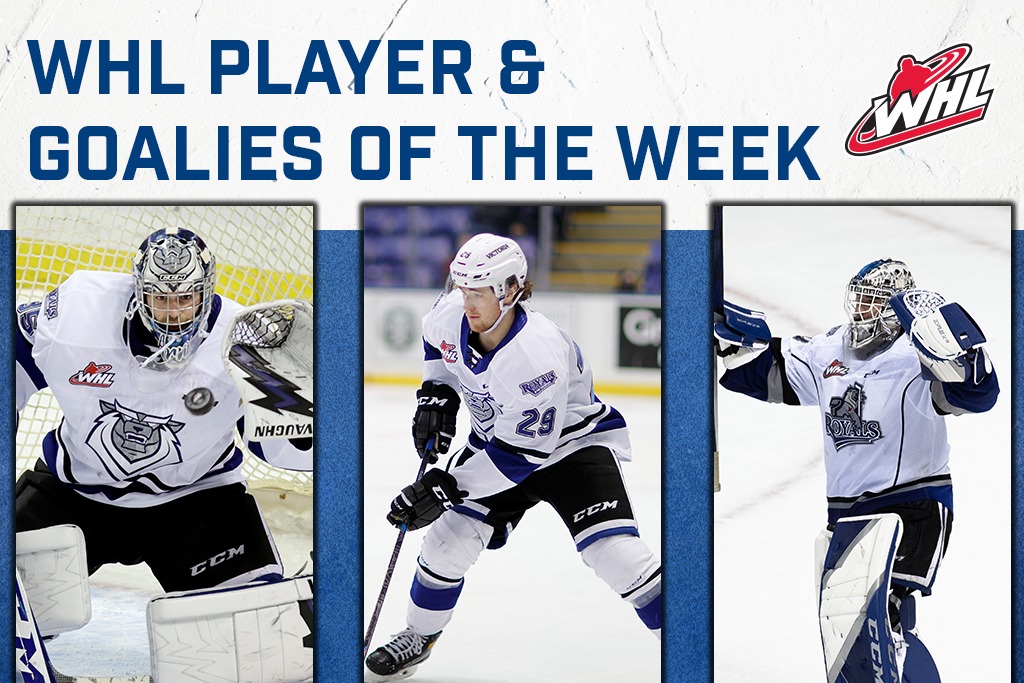 Veteran forward Bailey Peach was announced as the WHL Player of the Week after the spectacular four games he had against the Vancouver Giants and the Kelowna Rockets. The 20-year-old earned 13 points including seven in one game from eight goals and five assists.

Peach has said before confidence is a part of his game and credits that to his offensive display last week.

“I’ve really found my groove these last few weeks,” said Peach. “My confidence has been rising and that’s a huge part of my success.”

“We’re very happy for Bailey and proud of him. He’s very deserving of this recognition. He’s a true hockey player. He works hard, plays the game the right way, and is a tremendous person,” GM and Head Coach Dan Price said of Peach. “He leads by example and is a strong role model. We’re looking forward to watching his continued evolution throughout this season and beyond.”

The Royals dynamic goaltending pair of Tyler Palmer and Campbell Arnold were also recognized this week as the WHL Goaltenders of the Week.  Palmer played December 29th against the Giants and made 50 saves to record his first career shutout and set a franchise record for most saves in a shutout performance. Then on January 1st, the 18-year-old was in net against the Rockets where he made 39 saves on 43 shots.

“I’ve been really focusing on my fundamentals since the break; basic skills like tracking the puck and getting my feet set under me and balanced. Executing those skills to a high standard is what helped me towards my recent successes,” Palmer said.

Arnold was in net for two games against the Giants last week starting on December 27th, when he helped the Royals to a 3-1 victory, stopping 39 of 40 shots. On December 30th, he was back in net after a night off and the team completed their sweep of the Giants when he made 35 saves on 38 shots.

When speaking of the team’s two goaltenders, Price was proud to learn they both were recognized for their tremendous play.

“Campbell and Tyler are such hard working, competitive and versatile goalies,” said Price. “They each have their own unique personality and style, but they share common attributes such as calmness and game control mixed with athleticism and explosiveness, work ethic, preparation, relentlessness and quality of character.”

“Their presence in the room and on the ice really contribute to a sense of calmness and confidence among the whole team. We’re very proud of them for earning this recognition. The work they put in every day – off the ice, on the ice in practices and in games, and behind the scenes with the coaching and training staff, including Lynden Sammartino and Kai McDonald – is impressive.”

The Royals are also offering two holiday ticket packages for fans this season. Buy four vouchers for $70 or six for $100 and receive a special Royals gift. This offer has been extended to expire January 31, 2022.