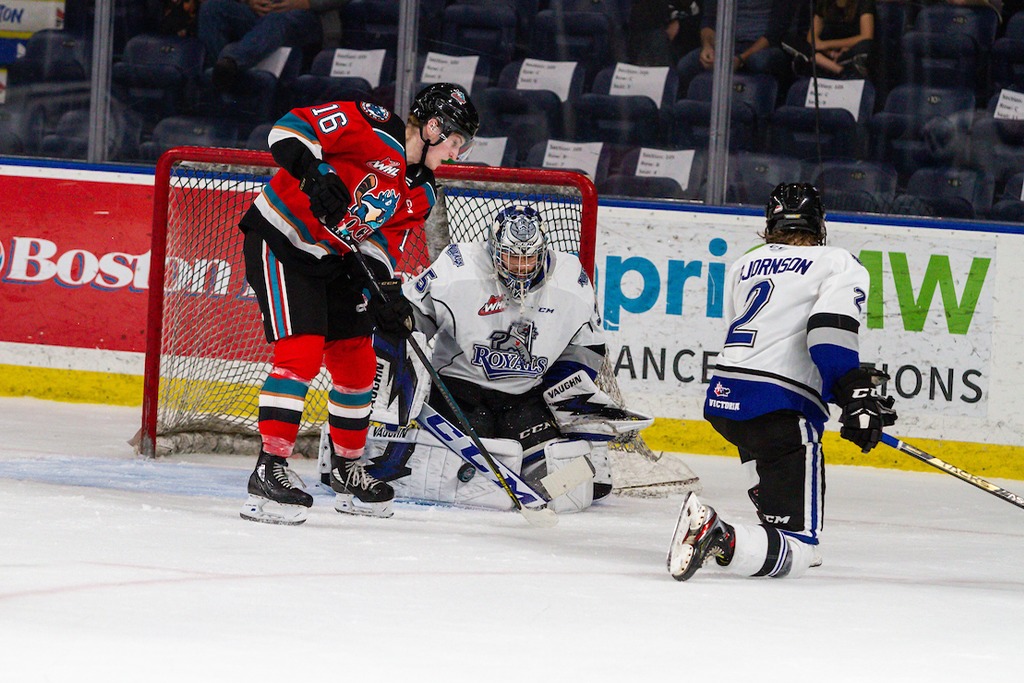 Forward Jake Poole scored two goals as the Kelowna Rockets defeated the Victoria Royals in a preseason game at Prospera Place on Tuesday.

The Rockets also benefited from a quality performance by forward Marcus Pacheco, who recorded two points of his own on a goal and an assist in the victory.

The loss marks the first defeat of the preseason for the Royals, who posted wins over the Vancouver Giants and Prince George Cougars last weekend.

“That was one of the most physical games I’ve seen our team play in a while,” said General Manager and Head Coach Dan Price. “Ryan Spizawka, Luke Rybinski and Anson McMaster were noticeable in this area. Also, the line of Alex Edwards, Anthony Wilson and Reggie Newman were very impactful with their speed, physicality and tenacity, which helped them create several scoring chances and two goals. We were able to get some good situational work in with all of the special teams play tonight, and we’ll build off of all of those things for tomorrow’s game in Kamloops.”

Victoria forward Riley Gannon registered a team-high two points on a pair of assists in the loss, while fellow forwards Tanner Scott, Alex Edwards and Anthony Wilson scored the three goals for the team.

Kelowna goalie Christiano Nicholas earned the win by saving 17 of 20 shots against, while Royals starting goaltender Logan Cunningham made 16 of 18 saves before being replaced by Campbell Arnold, who allowed two goals on 16 shots during his split-shift.

The Rockets would open the scoring with a goal by Marcus Pacheco at the 6:41 mark of the first period to hand his team an early 1-0 lead.

Victoria would respond near the end of the frame with a goal by forward Tanner Scott at 18:49, marking his first of the preseason. Riley Gannon would also count his first assist of the night on the goal.

The 1-1 deadlock would be broken by Kelowna defenceman John Babcock at 6:07 of the middle frame, but Victoria would soon respond with an unassisted marker by forward Alex Edwards at 13:06 of the second, re-tying the game at 2-2.

The Royals would then take a 3-2 lead late in the second with a goal by forward Anthony Wilson at 15:41, which saw Riley Gannon collect his second assist of the evening.

Victoria’s fortunes would take a turn in the third as Rockets forward Jake Poole scored his first of the night at 6:25 to make it 3-3, before scoring the eventual game-winner at 9:09 to put his team back up by one.

Kelowna’s victory would be secured with an Adam Kydd empty-netter at 19:09 of the third, handing the home-side the 5-3 win.

The Royals will be back on the ice for their final preseason contest tomorrow night against the Kamloops Blazers, scheduled to begin at 7:00 pm on Wednesday, Sept. 14 at the Sandman Centre in Kamloops.