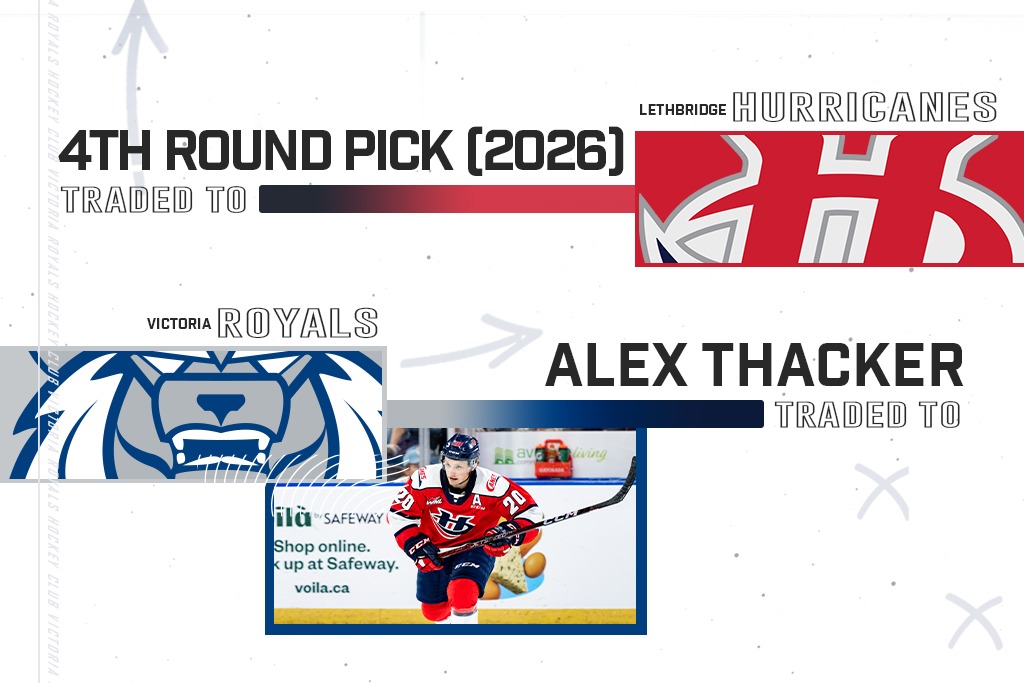 The Victoria Royals have acquired 2002-born forward Alex Thacker from the Lethbridge Hurricanes in exchange for a fourth round pick in the 2026 WHL Prospects Draft.

The Fort Saskatchewan, AB product was originally a sixth round pick (117th overall) of the Swift Current Broncos in the 2017 WHL Draft and would be dealt to Lethbridge in a trade prior to the 2019-2020 season. The player moving from Lethbridge to Swift Current in that trade was current Royals defenceman Wyatt Wilson.

He would also be honoured as the team’s Scholastic Player of the Year following the 2019-2020 season and served as an assistant captain for Lethbridge this season.

The 20-year-old is coming off the best season of his career in 2021-2022, where he recorded a team-leading 50 assists and added 14 goals to total 64 points in 68 games. He has gotten off to a solid start his year as well, collecting seven points on one goal and six assists in 16 contests.

Prior to his time with the Hurricanes, Thacker was a standout for his hometown minor hockey team, the Fort Saskatchewan Rangers U15 and U18 AAA squads, and made a handful appearances at the junior A level with the Whitecourt Wolverines of the AJHL. He was the captain of his U15 AAA team in 2016-17.

Thacker stands at 5’10”, 165 lbs and is a versatile left-hand shot who can play all three forward positions.

“We’re very happy to be able to acquire Alex. We’ve been following his progress for some time,” said General Manager and Head Coach Dan Price. “He’s a good teammate and a good person who will fit in very well in our dressing room, and obviously he’s an extremely competitive and versatile forward who can play in any situation. We look forward to welcoming him to Victoria and to his debut in a Royals uniform this weekend.”