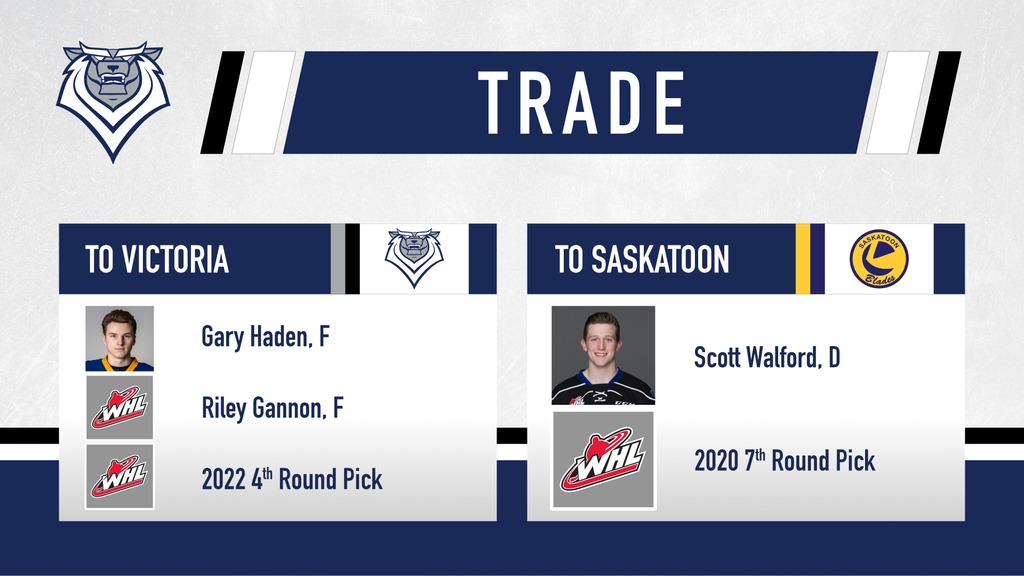 Victoria, BC – The Victoria Royals are pleased to announce that the club has acquired 1999-born centre Gary Haden (1999), the rights to unsigned prospect Riley Gannon (2002), a fourth round pick in the 2022 WHL Bantam Draft and a conditional pick from the Saskatoon Blades. In exchange the Royals have sent defenceman Scott Walford (1999), seventh round draft pick in 2020 and a conditional pick to the Blades.

A native of Airdrie, AB, Haden played in 55 games for the Blades last season where he recorded 62 points (30g-32a) and 23 penalty minutes to finish the year as the team’s second-highest goal scorer. Haden also took part in nine games for the Medicine Hat Tigers at the start of the campaign and registered a goal and two assists.

“With the strong group of defencemen coming to camp this year, it is the offensive side of our game that we felt needed addressing,” President and General Manager Cameron Hope said. “Gary will bolster our forward group. He is a dynamic forward who will certainly add a dimension to a well-rounded group.”

Haden was originally drafted by Regina in the ninth round, 189th overall, at the 2014 WHL Bantam Draft.

Gannon, who hails from Nanaimo, BC, spent last season in the Vancouver Island Junior Hockey League (VIJHL) with the Nanaimo Buccaneers. The 2002-born forward finished second in team scoring with 50 points (21g-29a) in 50 games for the Buccaneers and was named the VIJHL’s Rookie of the Year . He also skated in two games for the Alberni Valley Bulldogs of the BC Hockey League.

Prior to his time with the Buccaneers, Gannon played for his hometown North Island Silvertips of the BC Major Midget Hockey League. In 40 games with the Silvertips, he recorded 18 goals and 13 assists for 31 points.

The 5-9, 145 lb Gannon was listed by Saskatoon in October of last year.