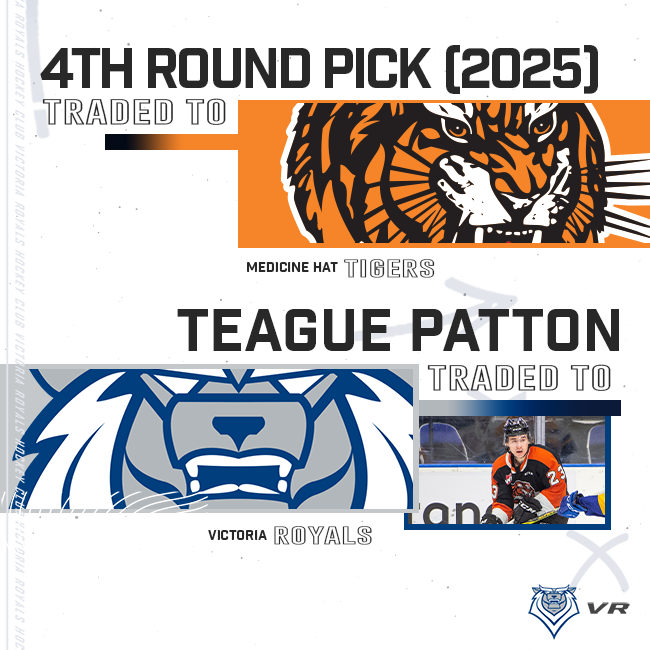 The Victoria Royals have acquired 2003-born forward Teague Patton from the Medicine Hat Tigers in exchange for a conditional fourth round pick in the 2025 WHL Prospects Draft.

The Kelowna, BC product appeared in 59 games for the Tigers last season, recording 21 points on 10 goals and 11 assists.

“We have been following Teague and his progress for some time now, and we’re happy to have the opportunity to acquire him,” said Royals’ General Manager and Head Coach Dan Price. “He brings a strong work ethic, along with grit and competitiveness, as part of his well-rounded game. He can drive offence, but he is also a versatile player who can contribute in all areas of the ice. We feel that he’ll fit in very well with our forward group and be a strong contributor to our team success.”

Patton was originally signed by Medicine Hat following their 2019 training camp. He would make his WHL debut later that season, appearing in a single game as a call up for the club.

He would become a full-time member of the Medicine Hat roster the following season and go on to play in 77 games for the club from 2020-2022, recording 12 goals and 13 assists during that span.

Prior to his time with the Tigers, Patton was a standout for the Okanagan Rockets U18 AAA squad in his hometown of Kelowna.

The 5’11”, 170lb, right-shooting forward will now reunite with former Tiger teammate and current Royal Caleb Willms, who played alongside Patton in Medicine Hat during the 2020-2021 season.