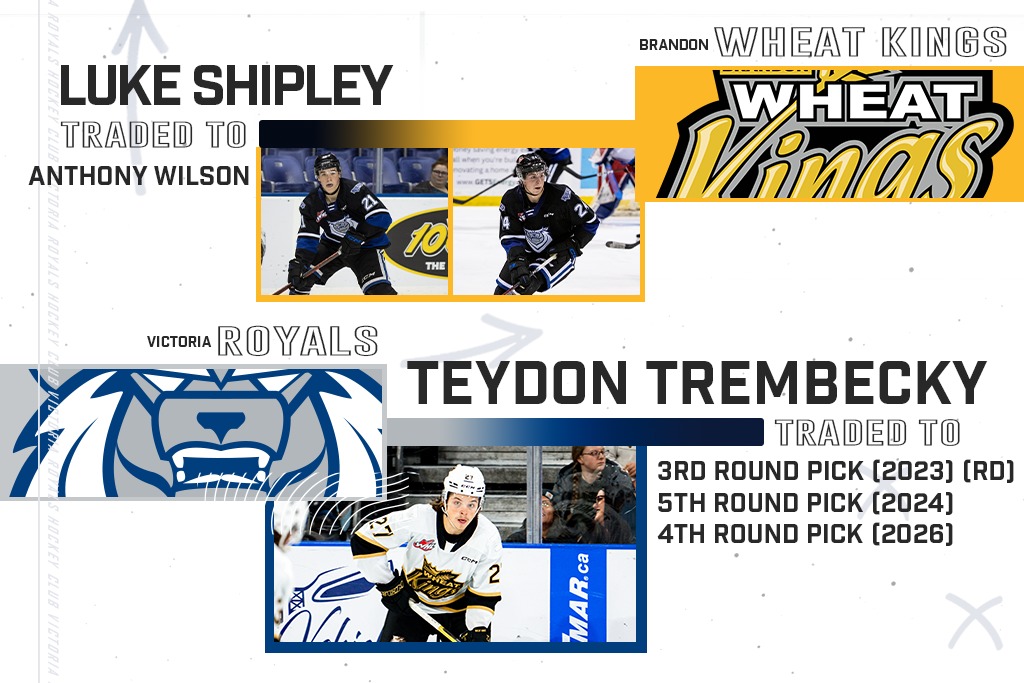 The Victoria Royals acquired forward Teydon Trembecky and three draft picks from the Brandon Wheat Kings in exchange for forward Anthony Wilson and defenceman Luke Shipley in a trade on Thursday.

“Teydon brings qualities we really covet in a player, and we have been following his development,” said General Manager and Head Coach Dan Price. “Quality of character, competitiveness, hockey IQ and vision on the ice are phrases which those who know him use when describing him. He has strong leadership traits on and off the ice and is tenacious. He is also in an important age group for us which helps create roster balance this year and over the next two to three years.”

Teydon Trembecky is a 17-year-old forward who was drafted by the Wheat Kings with the 57th overall pick in the 2020 WHL Prospects Draft. The Strathcona, AB product has played in 19 games for Brandon this year and spent the 2021-2022 season playing with both the Whitecourt Wolverines of the AJHL and the Northern Alberta Xtreme (NAX) Prep U18 AAA.

Trembecky, who stands at 5’11”, 171lbs, is a left-shooting winger who can play both sides of the ice.

“The draft picks provide flexibility this year and in coming years to draft for certain needs or positions, or to trade them to address immediate roster needs if and when they arise,” added Price. “We’ve made some of those types of moves in the last twelve months – for example, Teague Patton and Alex Thacker – so this trade also helps us replenish some of that draft capital. We are grateful to Anthony and Luke for their contributions to the Royals and to the City of Victoria, and we wish them all the best in Brandon.”

Heading to Brandon in the trade is forward Anthony Wilson, who is a former teammate of Trembecky at NAX Prep and was selected only two spots below him (59th overall) by Victoria in the 2020 WHL draft.

Also set to join the Wheat Kings is defenceman Luke Shipley, who has spent the past three seasons with the Royals, recording 26 points (five goals, 21 assists) in 103 career games.

The Powell River, BC native was drafted by the team with the 119th overall pick in the 2019 WHL Draft and recently surpassed the 100th game mark in a contest against the Calgary Hitmen earlier this month.