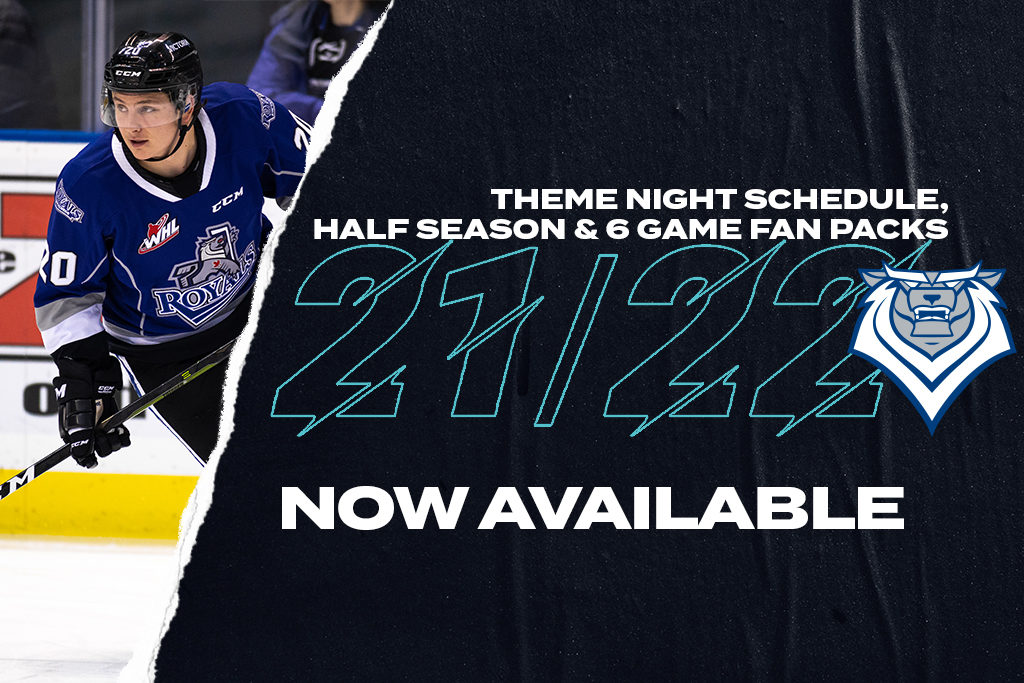 The Victoria Royals are pleased to announce the release of their upcoming promotional schedule and two exclusive ticket packages for the 2021-22 WHL Regular Season.

After a year away from Victoria, the Royals are excited to be back at Save-On-Foods Memorial Centre playing in front of the loudest fans in the WHL. The team has planned 34 themed home games that will provide fans with the ultimate hockey experience.

Theme nights for the upcoming season include classic games like the Teddy Bear Toss and Pink in the Rink. New to the Royals home games this year are exciting theme nights like Hocktoberfest, Way Back Wednesdays and the Halfway to Summer Jam.

Victoria’s Home Opener is on October 2nd against the Vancouver Giants and welcomes fans back to the Save-On-Foods Memorial Centre to officially kick-off the club’s eleventh season in the WHL.

The popular Teddy Bear Toss will happen on Friday, December 17th and fans are encouraged to bring stuffed toys to throw on the ice with all toys donated to local charities before Christmas. Another annual game, Pink in the Rink, will be on Saturday, February 11th with all proceeds from the game worn jersey auction donated to the BC Cancer Foundation.

New promotional nights for this season include Hocktoberfest, our way of bringing Germany to Victoria on Saturday October 9th and Way Back Wednesday where every Wednesday night home game will transport fans into a different era. Halfway to Summer Jam, another new theme night, will take fans back to warmth with our summer-themed party.

To celebrate the release of their 34 promotional dates, the Royals have also announced the return of two popular ticket packs for fans looking to attend multiple games this season. In addition to the already on sale Full Season Tickets (all 34 home games), fans can also purchase a Half Season Ticket pack (choice of any 17 home games) starting at $276 or the Six Game Fan Pack (six special event nights bolded below) starting at $120. All Royals’ ticket packs for the 2021-22 season include a variety of benefits including an exclusive pair of Return of the Roar socks. A full list of pricing and benefits can be found at www.victoriaroyals.com/tickets.

Fans who purchased a Half Season Ticket Pack or Fan Pack last season should have received their electronic invoice by email. Any fans interested in renewing or selecting seats through a ticket representative can contact the Royals’ ticket office at 250-220-7889, send an email request to tickets@victoriaroyals.com, or visit the Save-On-Foods Memorial Centre. Single game tickets for all 34 promotional games are set to go on sale in the coming weeks.

The full promotional schedule is below: