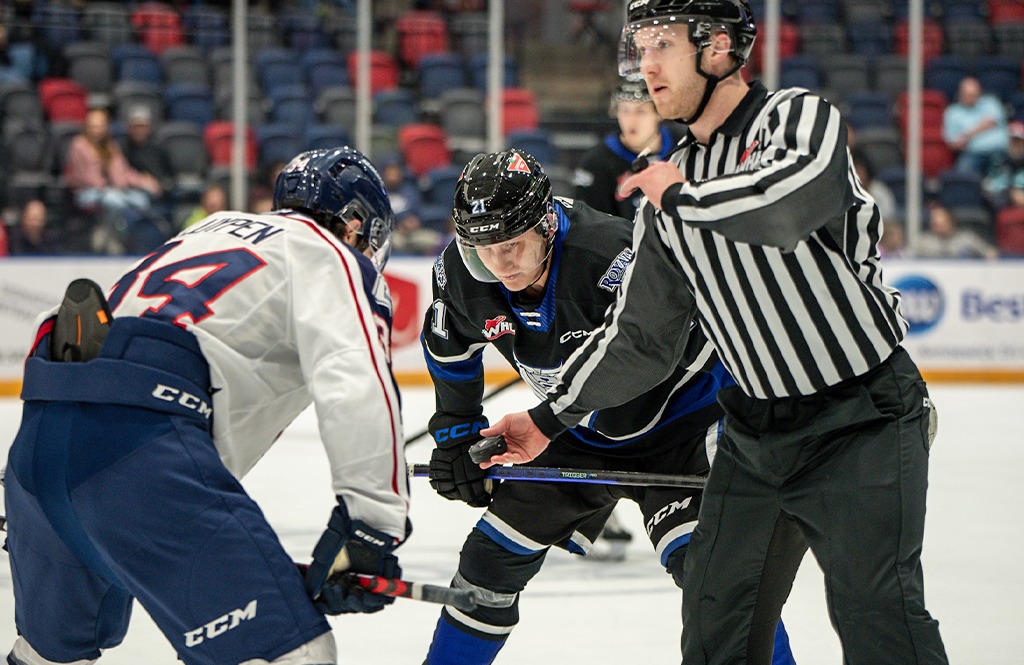 Forward Matthew Hodson scored twice as the Victoria Royals fell to the Tri-City Americans in the first leg of a four game road trip in Kennewick, WA on Wednesday.

Hodson has now collected four goals over his last two contests, bringing his point total to 23 (13 goals, 10 assists) on the season.

Wednesday’s game also saw 16-year-old defenceman Seth Fryer make his WHL debut. The Victoria native was selected by the Royals in the 10th round (206th overall) of the 2021 WHL Prospects Draft and has spent the majority year playing with the Peninsula Panthers of the VIJHL.

The Royals took a 4-0 lead to begin the game before surrendering five unanswered in a comeback effort by the Americans over the final two periods.

Victoria starting goaltender Braden Holt made 30 saves on 35 shots in the defeat.

Meanwhile, forward Ethan Ernst proved to be the top producer for Tri-City, collecting two goals, including the game-winner.

Americans’ starting goaltender Tomas Suchanek made nine saves on 13 shots before being replaced by backup Nick Avakyan, who saved 11 of 11 after entering the game to start the second period.

Forward Matthew Hodson (12) would give Victoria (12-26-3-1) an early 1-0 lead after taking a pass from linemate Teague Patton on a two-on-one opportunity at the 0:49 mark of the first.

Forward Jake Poole would collect the secondary assist on the play, extending his point streak to four games.

The Royals fast start would continue as they made it 2-0 on a goal by Riley Gannon (13)–assisted by forwards Teydon Trembecky and Alex Edwards at 10:03–before taking a 3-0 advantage on a subsequent unassisted marker by Reggie Newman (5) at the 10:39 mark.

The goals would keep coming for Victoria as Hodson (13) picked up his second goal of the period at 12:33 to put his team up 4-0 early in the contest.

Teague Patton and Jake Poole would collect the assists on the play, giving them both multi-point periods.

The majority of the second would pass without goals from either side, however the Americans would cut into the Victoria lead with a goal by forward Ethan Ernst (20) at the 18:23 mark.

The Royals advantage would then be cut to one goal after Tyson Greenway (23) found a prime scoring opportunity at 19:17 of the frame, bringing the score to 4-3 entering the third.

The Americans would collect their fourth unanswered goal to start the third, coming off the stick of forward Reese Belton (8) on the powerplay at the 3:03 mark to complete the comeback tie the game at 4-4.

Tri-City would then take their first lead of the game on Ethan Ernst’s (22) second of the night at 13:54 of the final frame, bringing the score to 5-4 where it would stand at the final buzzer.

Looking ahead, the Americans will head north this weekend for a pair of contests against the Kamloops Blazers on Friday and Saturday night.

Meanwhile, the Royals will remain south of the border for a matchup with the Portland Winterhawks on Friday, Jan. 20, followed by a contest with the Spokane Chiefs on Saturday, Jan 21.

The team will then wrap-up the weekend with a third consecutive road game versus the Kelowna Rockets on Sunday, Jan. 22.

Puck drop for their next game against the Winterhawks is set for 7:05 pm at Veterans Memorial Coliseum in Portland, OR.