Royals come up short in road loss to Chiefs 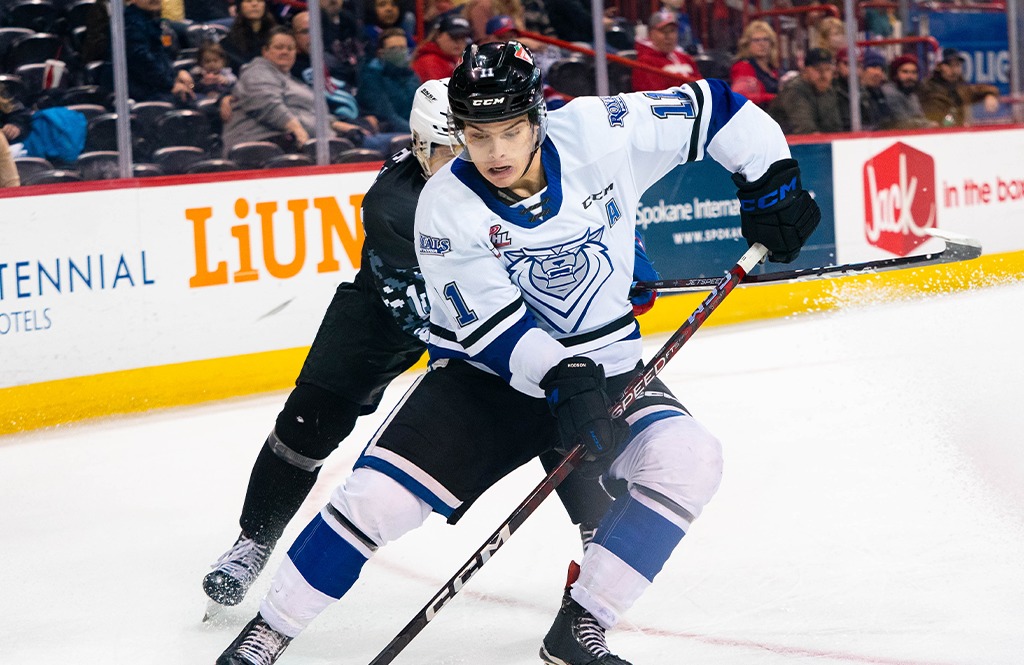 Victoria Royals forward Jake Poole extended his scoring streak to six games with a goal and an assist in a 6-3 loss to the Spokane Chiefs on Saturday.

The McAuley, MB product also reached the 50 point mark in the loss, and has recorded 3 goals and 10 assists during his recent streak.

Forward Matthew Hodson also recorded a multi-point performance with a pair of assists, while starting goaltender Nicholas Cristiano saved 29 of 34 shots against.

Meanwhile, forward Tomasso De Luca was the top-scorer for the Chiefs in the win, collecting three assists, while starting goalie Dawson Cowan recorded 28 saves on 31 shots.

Victoria (12-27-4-1) would open up a 1-0 advantage early in the first period on a goal by forward Marcus Almquist (8) at the 5:48 mark. Forward anner Scott would count the lone assist on the play.

However, the Chiefs would respond with a goal of their own off the stick of forward Ty Cheveldayoff at 9:05 of the first, tying the game at 1-1.

Shortly after the tying goal by Spokane (9-29-1-2), a powerplay marker by forward Jake Poole (24) at the 10:39 mark put the Royals back up by one headed into the second period.

Forward Matthew Hodson would pick up an assist on the play, extending his point streak to five games.

The Chiefs would retake the momentum to start the middle frame, first tying the game at 2-2 the game with a powerplay goal by forward Chase Bertholet (20) at the 0:13 mark, then taking a 3-2 lead on a marker by forward Carter Streek (10) at 4:28 of the second.

However, Victoria would respond with a game-tying goal by forward Teydon Trembecky (3) at 7:48 of the frame, bringing the score to 3-3 as the game passed its midway point.

The score would remain tied until the 1:41 mark of the third period, when Spokane forward Mac Gross (6) scored the eventual game-winner to bring the score to 4-3.

The Chiefs would add an insurance marker midway through the third on a goal by Cade Hays (8) at 9:36 of the frame, putting his team up 5-3 entering the final ten minutes of play.

Looking ahead, the Chiefs will hit the road for a Monday night contest against the Portland Winterhawks.

Meanwhile, the Royals will wrap-up their four game road trip with a Sunday afternoon matchup against the Kelowna Rockets.