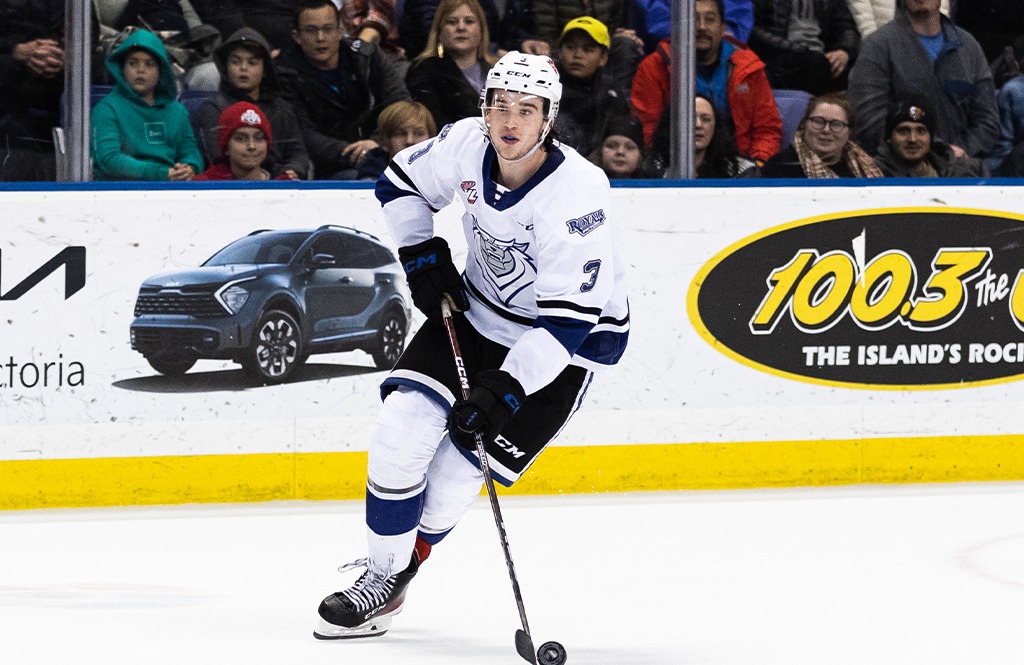 The Victoria Royals are set for a busy weekend of play as they wrap up their road trip with three consecutive contests against the Portland Winterhawks, Spokane Chiefs and Kelowna Rockets.

The Royals are looking to bounce back from a 5-4 loss in a road contest against the Tri-City Americans on Wednesday night and pick up some crucial points this weekend as they look to remain in the playoff hunt.

Despite the loss earlier this week, Victoria has remained in top form to start the new year, winning four of their last six games and climbing within a single point of a playoff spot.

Forward Matthew Hodson is one Royal that has emerged during the team’s recent run, counting two goals in back-to-back games and recording eight points (five goals, three assists) over his last five contests.

The Saskatoon, SK product currently ranks fifth on the team in scoring with 23 total points on 13 goals and 10 assists in 39 games played this season.

Goaltender Braden Holt is expected to garner most of the starts for the club this weekend. However, with three games in three nights, we could also see backup Nicholas Cristiano make an appearance in order to give Holt some much deserved rest.

Holt has been one of the most valuable pieces for Victoria since arriving in a trade from Everett last month, earning a 5-1-0-1 record with a 2.27 goals against average (GAA) and a 0.930 save percentage (SV%) over seven appearances.

The Royals first of three opponents this weekend will be the third-place Portland Winterhawks (28-8-2-1), who have won six of 10 coming into the weekend.

Portland has won all three matchups against Victoria this year, including their most recent meeting on Dec. 2, which ended in a 3-1 victory for the Winterhawks.

Backup duties for the Winterhawks are provided by Czech-born goaltender Jan Spunar, who has been equally as impressive this year, posting an 11-3-0-1 record with a 2.63 GAA and a .907 SV% in 15 appearances. Both netminders provide strong options for Portland this weekend.

Victoria will remain south of the border for their second game of the weekend, travelling to the northeast corner of Washington State for a matchup with the Spokane Chiefs (8-28-1-2).

The Chiefs are led on offence by 19-year-old forward Chase Bertholet, who leads the club with 43 points (18 goals, 25 assists) in 39 games played this season.

Spokane and Victoria have faced off on three occasions this season, with the Chiefs taking two of the three meetings. However, the Royals own the most-recent win, defeating Spokane 6-3 in early January.

Sherwood Park, AB product Cooper Michaluk has spent the majority of time between the posts for the Chiefs this season, posting a 5-12-0-2 record with a 4.73 GAA and a .864 SV% in 22 games.

The Royals will wrap up their busy weekend of play with another road contest against the Kelowna Rockets, scheduled for Sunday afternoon.

Victoria and Kelowna have seen a lot of each other lately, with Sunday set to be their fourth meeting of the month.

The Royals have enjoyed success over their division opponent this year, winning the last five meetings, which included a two-game sweep last weekend in front of the home crowd in Victoria.

Forward Andrew Cristall headlines the Rockets lineup, although a recent injury puts his status in doubt for the weekend. The Vancouver native sits second in the league in scoring, amassing 62 points (26 goals, 36 assists) in 36 games this season and is projected as a first-round pick in the upcoming 2023 NHL Entry Draft this summer.

The Rockets employ the talented duo of Talyn Boyko and Jari Kykkanen between the posts this season, with the 20-year-old Boyko making 23 appearances to Kykkannen’s 18.

The Royals first game of the weekend is set to begin at 7 pm on Friday, Jan. 20 at Veterans Memorial Coliseum in Portland, OR, while their second game will take place at 7:05 pm the following night, Jan. 21, at Spokane Veterans Memorial Arena in Spokane, WA.

Finally, Victoria will wrap up their weekend against the Rockets on Sunday, Jan. 22, where puck-drop is set for 4:05 pm at Prospera Place in Kelowna, BC.