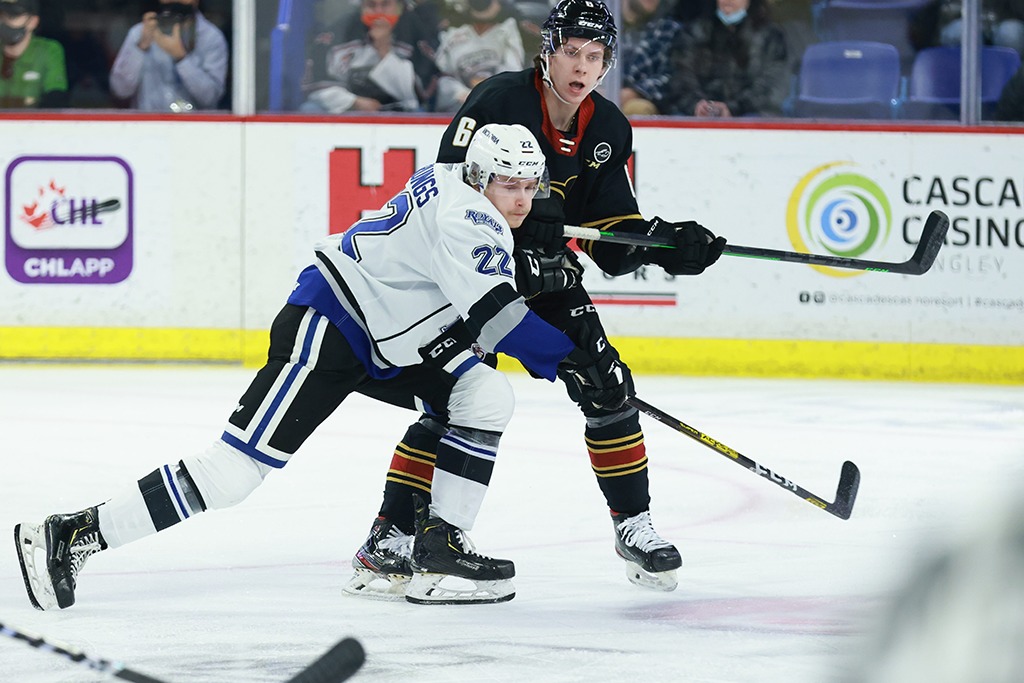 The Victoria Royals beat the Vancouver Giants 3-2 on Saturday night at the Langley Events Centre in Vancouver.

The first period began with zero shots on goal for either team until Vancouver shot one towards Tyler Palmer at 4:44. Luke Shipley gave the Giants their second power play of the night with ten minutes left to go in the first when Riley Gannon had a one-on-one chance short-handed but shot just high of the Giants net. Victoria went on the power play with six minutes left in the first when Bailey Peach took a pass from Gannon Laroque and Keanu Derungs to give the Royals the lead heading into the second.

Palmer made multiple great saves to start the second period to keep the game at 1-0. Jason Spizawka took a penalty for hooking at 4:26 almost immediately followed by another penalty to Kalem Parker for a check from behind. After a few fumbles in front of the Royals net, the Giants tied the game on a goal from Fabian Lysell. Victoria came back fighting and Royals captain Tarun Fizer got his first goal of the season assisted by Peach and Brayden Schuurman at 9:34. With just over five minutes left in the second period, the Giants got what looked to be their second of the night, but had it waived off because the play was offside. However, Vancouver would end up tying the game with two minutes left thanks to a goal from Justin Sourdif to end the period.

The Giants were applying the pressure in the start of the third looking to take the lead for the first time in the game. Both teams were able to get a few shots on goal but Palmer and Gurski looked good in net. The two teams traded penalties but neither one was able to get on board during their powerplays. With 13 seconds left in the third period, the Royals refused to give up and Evan Patrician put one behind Gurski with an assist from Keanu Derungs and Reggie Newman to end the game as a 3-2 win for the Royals.

GM and Head Coach Dan Price was proud of his team for their efforts this evening.

“We’re happy for the group, and proud of them. That was a good step forward. They put in a lot of quality work over the last two weeks, and that was a tough game on the road against a difficult opponent,” he said.  “The players really stuck with it and everyone contributed. There was no easy ice out there. It was a solid team win, and of course everyone was really happy for Evan Patrician scoring the winner against his first WHL team.”

“Huge credit to J.F. Best, as well, for a tremendous call in a pressure moment on the offside challenge. Now we turn our focus to preparing this week for another tough opponent in the Everett Silvertips, coming to Victoria on Friday.”

Three stars of the night were Will Gurski, Bailey Peach and Justin Sourdif.

The Royals head back to Victoria to take on the Everett Silvertips on Friday, November 26th for a special “Pucks and Paws” night.  For tickets to the Friday game, visit the Victoria Royals ticketing page or call the Select Your Ticket box office at 250-220-7777.