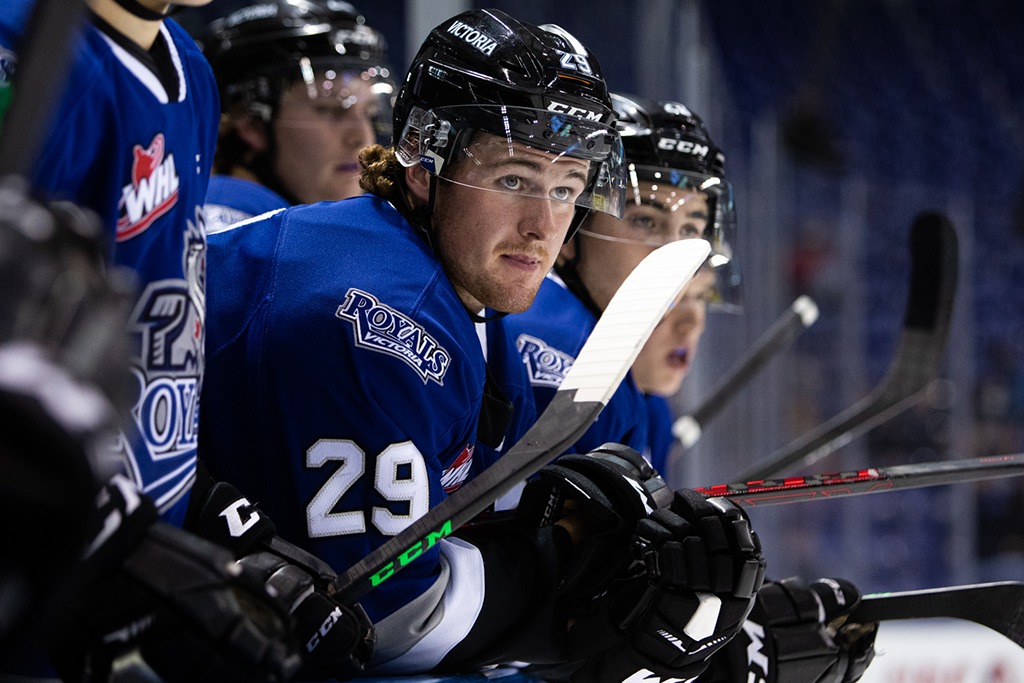 The Victoria Royals lost 3-2 to the Blazers tonight at the Save-on-Foods Memorial Centre.

It was a fast paced first period with both teams coming onto the ice looking to score first. The Blazers Marko Stacha scored first on an awkward rebound four minutes in. It remained a competitive period for both teams, but the Blazers would get one more from Matthew Seminoff to make it a 2-0 game at the end of the first.

Heading into the second period, both teams continued to skate hard and look for more scoring opportunities. With nine minutes left in the second, the Royals were back to fighting off a penalty when Blazers Caeden Bankier fought through traffic in front of Palmer to make it 3-0. The Royals were unable to get anything past Blazers goalie Dylan Garand after 40 minutes of play.

Both teams started the third with a man in the penalty box to make it a four-on-four game for the first two minutes.  Victoria continued to turn up the heat and drive towards the net when Keanu Derungs and Brayden Schuurman connected with Bailey Peach to get the first goal of the night making it a 3-1 game. It was Royals defenceman Wyatt Wilson who put the team up 3-2 with his first goal of the season assisted by his brother Anthony Wilson 11 minutes in. With the tying goal in reach, the Royals late burst of energy saw them get some close calls but they were unable to tie the game leaving the score at 3-2.

“Tremendous credit to our leadership group – Bryks, Derungs, Laroque, Yoder, Peach – that leadership group was the one that got us going and the aggression going in the third,” GM and Head Coach Dan Price said of the veteran players. “We’ll be ready to carry that over into the first period tomorrow.”

Royals goaltender Tyler Palmer faced 42 shots on net and was once again an anchor for the Royals Squad.  His teammate, Bailey Peach knows the team has to do more to help out Palmer.

“It’s unbelievable. The guy has been outstanding. I can’t believe some of the saves he’s made,” Peach said. “Tomorrow we’ve got to bring more energy at the start of the game. We came into the third tonight with lots of high energy and momentum, kept it simple and that’s what we’ve got to bring into tomorrow’s game as well.”

The Royals are back at it tomorrow night against the Blazers at 7:05 p.m. for the first “Way Back Wednesday” of the season celebrating “60’s night” in partnership with Baggins with proceeds going towards Seniors Serving Seniors.

To purchase tickets to tomorrow’s game, visit Select Your Ticket, call the Select Your Tickets box office or stop by the Save-on-Foods Memorial Centre Ticket Office Wednesday through Friday between 11 a.m. – 4 p.m. Ticket prices start at $25 for students, seniors and corner seats, $30 for sides and ring and go up to $39 for Premium Club seating.