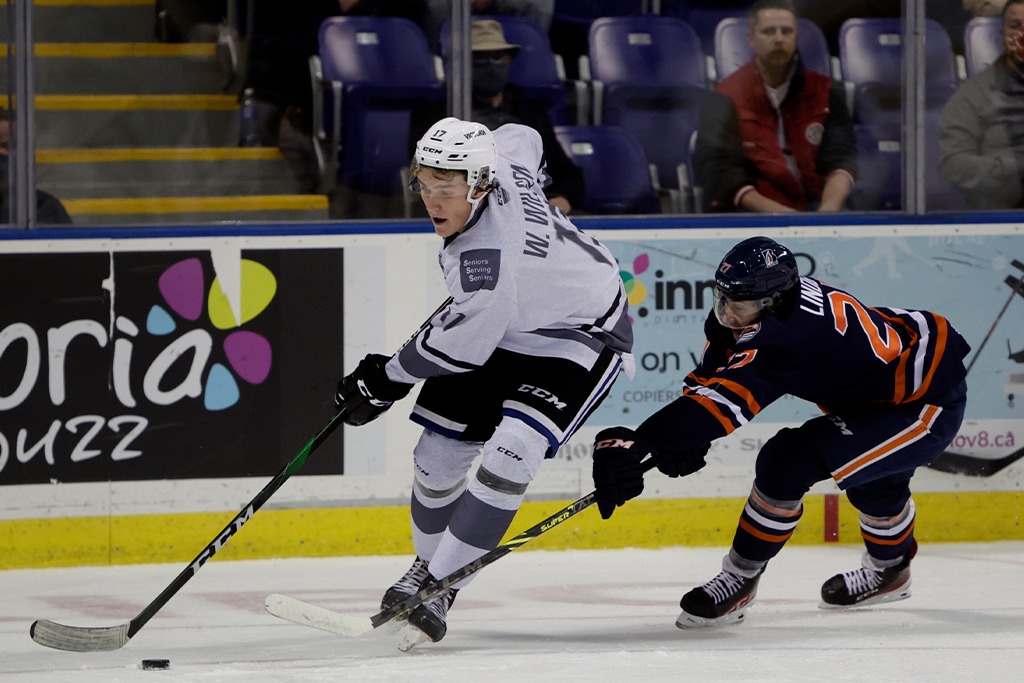 The Victoria Royals lost 8-3 to the Kamloops Blazers to end their five-game homestand.

Victoria came out with the aggression and energy they knew they’d carry over from last night. Sebastian Wraneschitz was in net tonight for the Royals to give Tyler Palmer some rest before the team heads to Prince George this weekend. The netminder took a penalty for playing the puck outside of the trapezoid at 6:40 which allowed Caeden Bankier of the Blazers to put one between the pipes to make it 1-0. The Royals kept up their competitive pace throughout the first period leading in shots on net 14-13.

Reggie Newman had a great chance to open the second period but went wide of the net. During a powerplay for the Blazers at 3:40, Fraser Minten made it a 2-0 game in favour of Kamloops. Three minutes later, the Royals were on a powerplay when Bailey Peach scored his second of the season with assists from Keanu Derungs and Ty Yoder to make it 2-1. At 11:31, the Blazers were back on the powerplay when Caeden Bankier scored his second of the night to make it a 3-1 game. With four minutes left to go, Josh Pillar put one past Wraneschitz making it a 4-1 game, but Brayden Schuurman quickly responded with an assist from Keanu Derungs and Bailey Peach to make it a 4-2 game heading into the third.

Despite the loss, GM and Head Coach Dan Price knows there are a lot of teachable moments and takeaways from the game that the team will bring with them to Prince George this weekend.

“There were some really key moments especially early when the game was close,” said Price. “There were some breakdowns as well, Kamloops made those mistakes too and that’s how we scored. That’s the game of hockey and those are mistakes that happen on both sides.”

Bailey Peach, who had one goal and one assist, feels like he is settling in to his role here with the Royals.

“I think I’m feeling better every single game and I’m getting into my groove now, playing with good players and their finding me. It’s not the outcome we wanted tonight but I’m happier with my play,” Peach told reporters. “As a 20-year-old you have to be a leader and that’s what I’ve come here to do.”

The Royals head on the road Friday to take on Prince George Saturday and Sunday at the CN Centre before heading back to Victoria to face the Cougars again next weekend.

To purchase tickets for next weekend, visit Select Your Ticket, call the Select Your Tickets box office or stop by the Save-on-Foods Memorial Centre Ticket Office Wednesday through Friday between 11 a.m. – 4 p.m. Ticket prices start at $25 for students, seniors and corner seats, $30 for sides and ring and go up to $39 for Premium Club seating.