Royals End the Week with Six Points in Loss to Rockets 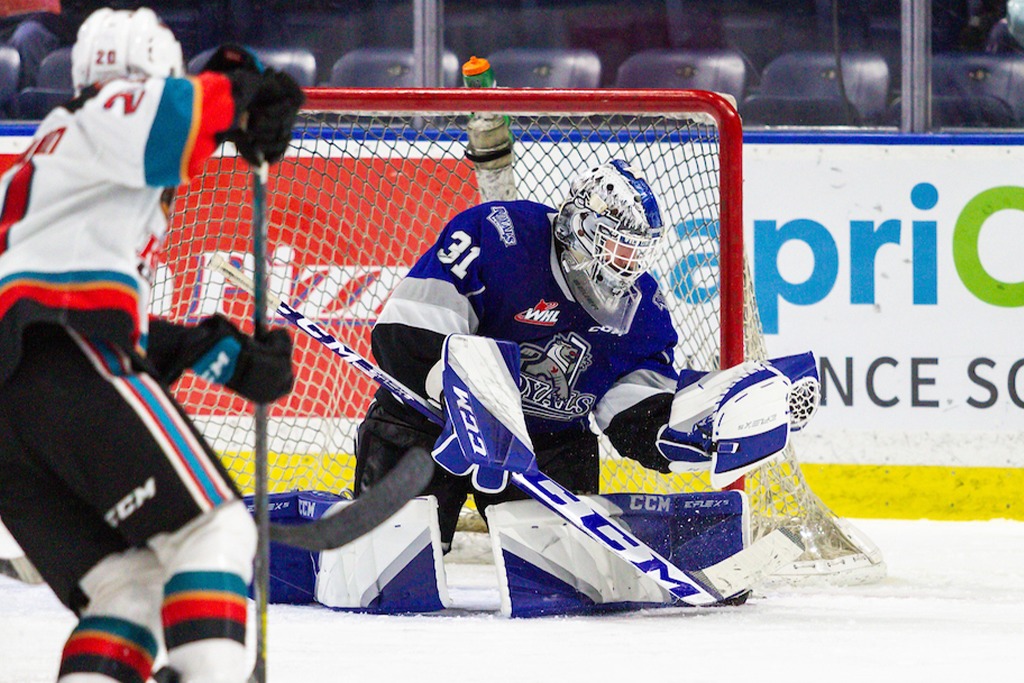 Victoria came into the afternoon contest on a high after winning three games against the Giants earlier this week. This was the first afternoon game for the Royals and their fourth game in six nights, with ten players still sitting on the injured reserve.

Bailey Peach, the only goal scorer for Victoria this afternoon, improved his goal streak tonight to 11 in the last six games and earned the third star of the night after scoring two goals for the Royals. The Falmouth, NS native ranked 10th in the league in goals before today’s contest.

It was a fast paced first period with the Rockets having a chance right off the bat, but Royals netminder Tyler Palmer was dialed in. The two teams were playing a back-and-forth game of hockey, with the first whistle occurring at the five-minute mark. Neither team could create a scoring opportunity with shots on goal at 7-4 in favour of the Rockets. Nearing the end of the period, each team started to turn up the energy and had a few close calls, but the period ended scoreless.

The second period started off with a different tune when the Rockets scored on a cross ice pass from Colton Dach to Mark Liwiski a minute in. The lead would not last long however, with Brayden Schuurman making a pass to Peach who put it high behind the Rockets goaltender Talyn Boyko to tie the game.

After a fairly quiet first period, the goals kept coming when the Rockets got their second of the night from Jake Poole with just over ten minutes to go in the second. Palmer was making incredible saves in net to keep it a one goal game when Peach took the puck on a turnover to get his second of the night and make it a 2-2 game to end the period.

Within the opening minutes of the third, both teams had opportunities on the power play but were unable to capitalize on them. Palmer continued to make some highlight reel saves, forcing the Rockets to be relentlessly persistent until Jake Lee found an open spot to make it 3-2. The period was getting more aggressive with the Rockets making some big hits and in the final five minutes of the third period, Pavel Novak made a pass to Max Graham who made it 4-2. Victoria went on the power play after Devin Aubin drew a penalty for cross checking and the team pulled Palmer to get two extra attackers. Unfortunately for the Royals, Jake Lee shot the puck into the open net short handed, ending the game 5-3 for the Rockets.

Talyn Boyko was in net for the Rockets tonight and made 19 saves on 21 shots while Palmer faced 43 shots and made 39 saves.

Despite the loss, the Royals put every last bit of effort on the ice tonight and Associate Coach and Assistant GM J.F. Best commented on their resiliency.

“This was a competitive playoff style game with tight checking and physicality at both ends. Our guys were tenacious and competed the entire night,” said Best. “Credit goes to Kelowna. They were able to capitalize on a chance in the third. We will rest up over the coming days and look forward to a productive week before heading to PG.”

The Royals will travel to Prince George next weekend to face the Cougars for the first time in the new year.

The next Royals home games are January 11th and 12th against the Spokane Chiefs. These games were originally scheduled in November but postponed due to the pandemic. On January 11, the Royals will host the Front Line Workers Appreciation game and a Superhero Salute on the 12th.

The Royals are also offering two holiday ticket packages for fans this season. Buy four vouchers for $70 or six for $100 and receive a special Royals gift. This offer has been extended to expire January 31, 2022.
Follow the Royals on Instagram, Twitter, Facebook, Youtube and TikTok and visit our website to find out more about ticket sales and the latest news on the team.