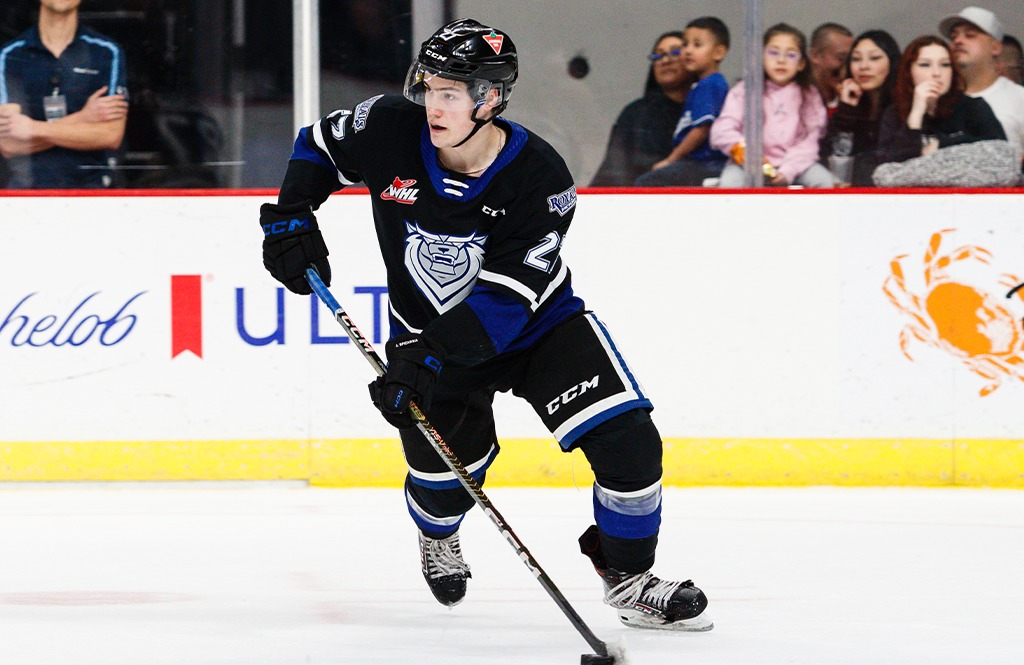 Victoria will travel to Spokane for their next game on Saturday

Forward Teague Patton scored twice for the Victoria Royals in a 7-6 overtime loss to the Portland Winterhawks on Friday night.

Patton’s multi-goal performance on Friday extended his point streak to seven games. The Kelowna, BC product has collected nine points on three goals and six assists over that span, bringing his scoring totals to 11 goals and 21 assists for 32 points this year.

The game also saw forward Jake Poole record a goal and an assist to extend his own point streak to five games. The 20-year-old leads the team with 48 points (23 goals, 25 assists) in 41 games this season.

Multi-point nights were also had by forward Alex Thacker (one goal, one assist) and defenceman Justin Kipkie (two assists), while goaltender Braden Holt made 38 saves on 45 shots on the defeat.

Meanwhile, forward Robbie Fromm-Delorme would play the hero for the Winterhawks, scoring two goals–including the overtime-winner–and adding an assist as they overcame a two goal deficit late in regulation to get the win.

Winterhawks netminder Dante Giannuzzi stopped 29 of 35 shots in the victory.

Portland (29-8-2-1) forward James Stefan (14) would open the scoring just 12 seconds into the game, slipping one past Royals goaltender Braden Holt on the short side to give the home side an early 1-0 lead.

However, Victoria (12-26-4-1) would soon tie the game as forward Alex Thacker (7) tipped-in a point shot by defenceman Justin Kipkie at the 4:23 mark of the first. Forward Jake Poole would pick up the secondary assist on the goal.

James Stefan (15) would strike again midway through the frame, netting his second of the period at 10:07 to retake the lead for the Winterhawks.

But the Royals would again answer back, tying the game for a second time with an unassisted goal from forward Teague Patton (10) at the 16:54 mark of the first, bringing the score to 2-2 entering the second.

Portland would retake the momentum in the second, with forward Gabe Klassen (23) scoring at 9:37 of the frame to give his team a 3-2 lead.

The back-and-forth action would continue in the back-half of the frame as Victoria’s Teague Patton (11) collected his second game-tying goal of the night–assisted by defenceman Jason Spizawka and forward Matthew Hodson–at the 14:45 mark to bring the score to 3-3.

The Royals would then grab their first lead of the game as forward Reggie Newman (6) tipped-in a Justin Kipkie point shot at 19:55 of the second to bring a 4-3 lead into the third.

Forward Ryan Spizawka would collect the secondary assist on the go-ahead goal.

Forward Robbie Fromm-Delorme (22) would provide the tying goal for the Winterhawks to start the third, striking at the 2:26 mark to even the game at 4-4.

However, the Royals would retake the lead at the 11:00 mark of the period on a goal by forward Marcus Almquist (7), assisted by forward Riley Gannon.

Victoria would then increase their lead to two goals on a marker by forward Jake Poole (23) at 14:20 of the frame, bringing the score to 6-4 as the game entered its final few minutes.

But the Winterhawks wouldn’t go away without a fight, using a goal by Gabe Klassen (24) to cut the lead to one at the 16:50 mark of the third.

Portland would then force overtime with a game-tying goal by Robbie Fromm-Delorme (23) with the net empty at 18:41 of the frame, bringing the score to 6-6 at the end of regulation.

The Winterhawks would complete the comeback with a goal by forward Kyle Chyzowski (11) at the 2:30 mark of the extra frame, sealing the 7-6 victory.

Looking ahead, the Winterhawks will remain at home to host the Lethbridge Hurricanes on Saturday night.

Meanwhile, the Royals will continue their road trip with a contest against the Spokane Chiefs on Saturday, where puck-drop is set for 7:05 pm at Spokane Veterans Memorial Arena in Spokane, WA.