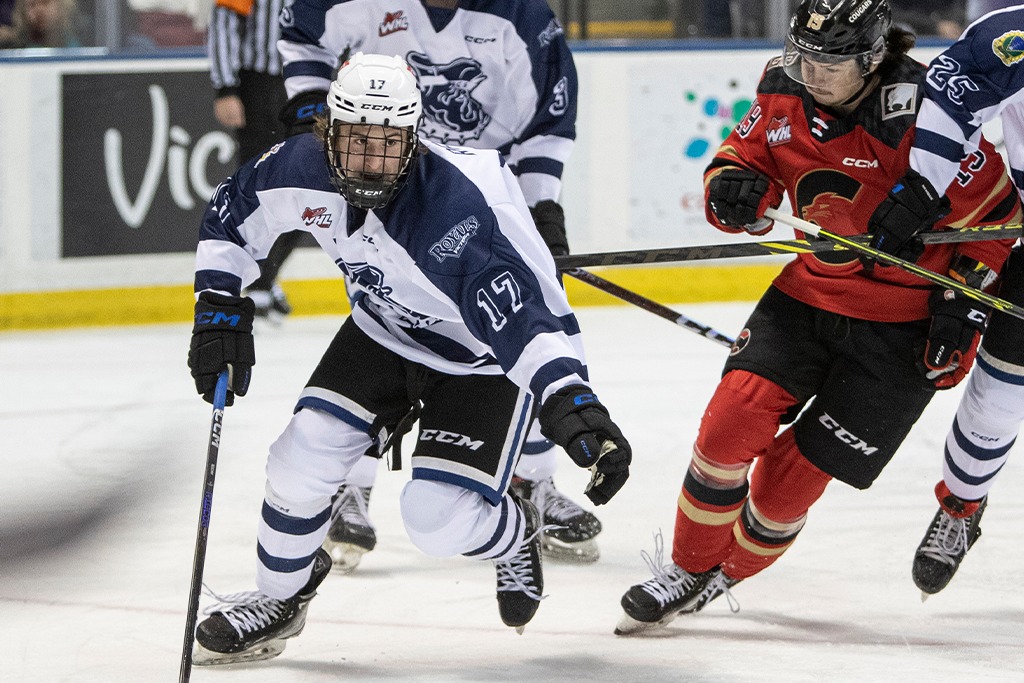 Forward Cole Reschny scored his first career WHL goal for the Victoria Royals in a 5-2 defeat at the hands of the Prince George Cougars on Saturday at the Save-On-Foods Memorial Centre.

The 15-year-old was playing in just his third major junior game and the first in front of the home crowd in Victoria.

It is a moment the 2022 third-overall pick won’t soon forget:

“It was pretty exciting, good to get that one,” said Reschny postgame. “It was four-on-four, me and Pooler [Jake Poole] were out there, think we had a three-on-three or a two-on-two going down the ice and he fed it across the blueline to me and I picked it up and top left was open, so I took the shot.”

Head Coach Dan Price continues to be impressed by the talent displayed by Reschny in his handful of appearances this season:

“Every time he’s on the ice is pretty much a scoring chance,” said Price. “He’s such a responsible defensive player too…I have as much respect for him as a young man as I do as a player.”

The team also celebrated forward Teague Patton’s 100th career WHL game on Saturday. The 18-year-old was acquired by the club in the offseason and has posted 16 points (five goals, 11 assists) in 21 games with Victoria this season.

Penalties made a huge impact on the final result on Saturday, with three of the five goals by the Cougars coming on the man advantage.

Despite the final result, General Manager and Head Coach Price was encouraged by the effort shown by his team tonight:

“That did not feel like a loss at all,” said Price. “Yes, Prince George outscored us, but considering we’re missing the third of our lineup, having a very even game like that, despite also the powerplay disparity, and having as many chances and as much puck possession as we did…For me, it was a great moment for our team despite the fact that we were outscored.”

Cole Dubinsky was the top scorer for the Cougars in the victory, scoring two goals. Forward Chase Wheatcroft also put on a strong performance with a goal and an assist, while starting goaltender Tyler Brennan stopped 21 of 23 shots against.

The recently acquired Alex Thacker (2) would give Victoria (3-16-3-0) the early 1-0 lead with his first goal as a member of the Royals at the 11:24 mark of the first period. Forward Teague Patton and defenceman Kalem Parker would pick up assists on the play.

That lead would hold until late in the frame when Prince George (12-9-0-0) forward Cole Dubinsky (7) potted one following a costly turnover by the Royals at their own blueline, tying the game at 1-1 heading into the second.

The Cougars would carry the momentum into the second, make it 2-1 early in the frame on a powerplay marker by forward Cole Dubinsky (8), his second of the night.

However, the Royals would soon respond as top prospect Cole Reschny scored his first WHL goal to tie the game at 2-2 at the 15:17 mark.

Forward Jake Poole and defenceman Justin Kipkie would pick up assists on the play. With the point, Poole extended his scoring streak to five games.

Prince George would break the tie with a goal by forward Ondrej Becker (5) at 16:27 of the second, before doubling up their lead on a powerplay goal from forward Chase Wheatcroft (16) at the 17:29 mark.

The Cougars would add one more in the second, with forward Riley Heidt collecting his team’s third powerplay goal of the night at 19:15 to bring the score to 5-2 entering the third.

Despite several chances from both sides, the third period would pass without a goal and the game would end with Prince George taking home the 5-2 victory.

Victoria starting goaltender Logan Cunningham made 25 saves on 30 shots in the defeat.

Looking ahead, Prince George will return home for a matchup against the Moose Jaw Warriors this Wednesday, Nov. 23.

Meanwhile, Victoria will take the next six days off as they prepare for a contest against potential 2023 first-overall pick Connor Bedard and his Regina Pats next Saturday, Nov. 26 at the Save-On-Foods Memorial Centre in Victoria.