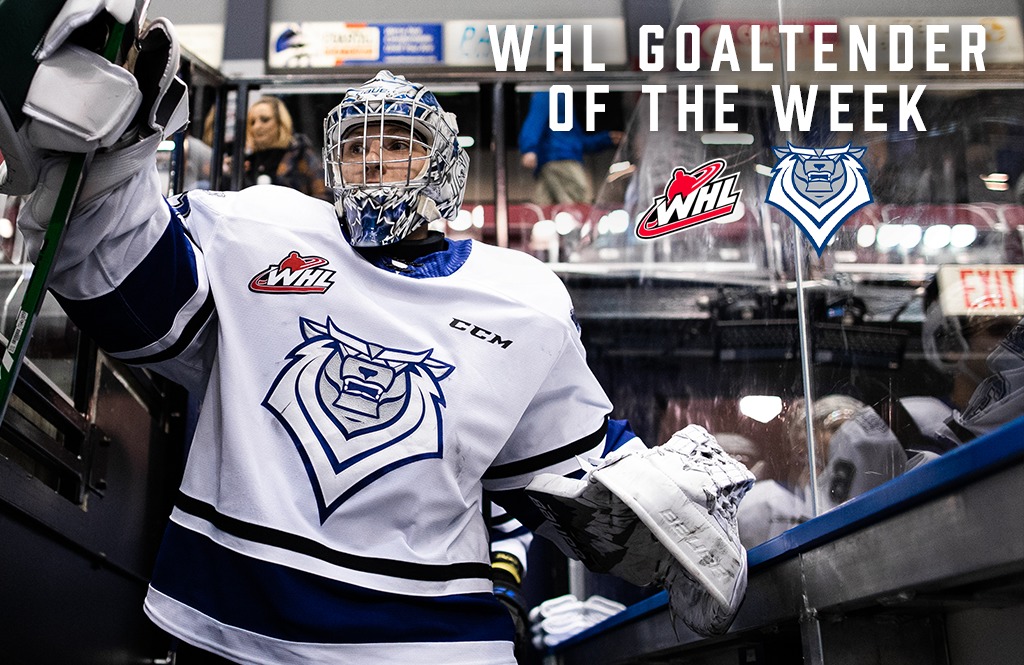 Victoria Royals goaltender Braden Holt has been named the WHL Goaltender of the Week after backstopping his team to back-to-back wins over the Kelowna Rockets this weekend.

Holt kicked-off his outstanding weekend with a 29 save shutout in the Royals 4-0 win on Friday and would stop 27 more the following night as Victoria downed Kelowna 6-3 to complete the weekend sweep.

He was quick to thank his teammates and fans for their support:

“It’s my first one ever and I’m super excited,” said Holt. “It’s a team accomplishment, they played really hard all week…The fans have been amazing, I think I watched the wave go around like six times this weekend, and we feed off that. It’s been super exciting.”

It was the third shutout of the season for the Bozeman, MT product, which ranks second among all WHL netminders. He has recorded a total of eight shutouts across his junior career.

Holt has excelled since being acquired by Victoria in a trade with Everett late last month, amassing a 5-0-0-1 record with a 1.81 goals against average (GAA), a .943 save percentage (SV%) and two shutouts through his fists six appearances with the club.

“It’s been a motivating weekend,” added Holt. “We’ve been playing very well recently especially after the break. I’m super excited to be a Royal and we’re excited to keep making that push towards a playoff spot. We want to prove we belong in the playoffs.”

It is the first time the 19-year-old has received the Goaltender of the Week award during his four year WHL career.

“We’re very proud of Braden. His play on the ice is a direct result of the hard work he puts in every day, and of how he approaches his preparation and the game of hockey,” said General Manager and Head Coach Dan Price “He’s very deserving of this recognition and it stems from his work ethic and quality of character. I know he views this as team recognition also, and this stems from how hard he and his teammates play for one another.”

Multiple ticket packages are available for purchase, including a Family Pack, Group Tickets, VictoriaNow Family Section, Vizzy Section and Molson Ice Seats. Call our ticket office at 250-220-7889, send an email to tickets@victoriaroyals.com or visit our website to learn more victoriaroyals.com/ticket-promos.