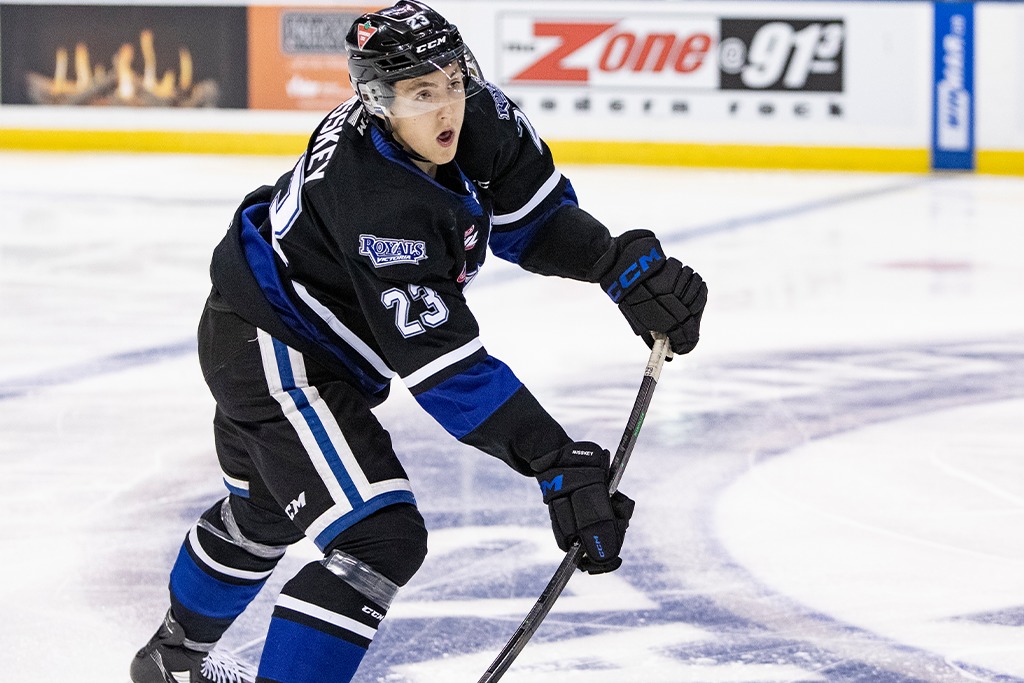 The Victoria Royals will remain at home this weekend as they host the Prince George Cougars for a two-game set beginning Friday night.

It will be the first time since mid-October that the Royals have battled a BC Division opponent, and they are excited to resume the rivalry with the Cougars:

“The BC Division rivalries are always such fun games to play in,” said Royals Head Coach Dan Price after practice Wednesday. “They’re physical, there’s usually some animosity there, especially in the back-to-back games.”

“Prince George plays that way too, fast and physical, just like we are. So we’re looking forward to it for sure, it will have a lot of that snarl and grit to it that we’re accustomed to seeing with BC Division games.”

Victoria (3-14-3-0) is coming off two hard-fought defeats at the hands of the conference-leading Portland Winterhawks last weekend and will have another tough test against the division-leading Cougars this weekend.

The offensive pairing of Jake Poole and Teague Patton have been a bright spot for the team over the past few weeks and rank first and second, respectively, in total points for the team this season.

Poole has been particularly effective of late, recording six goals and seven total points in his last six contests to bring his scoring total to 18 points (nine goals, nine assists) in 18 games this season.

Meanwhile, the Kelowna, BC-born Patton has also been valuable for Victoria over the past month – recording five goals and nine assists for 14 points on the year – and is coming off a two-point performance in the team’s loss last Saturday.

Standing in Victoria’s way this weekend is a  Prince George (10-9-0-0) squad that has gotten off to an impressive start this season, currently leading the BC Division by two points over second-place Kamloops.

Forwards Koehen Ziemmer and Riley Heidt – both expected to be first round picks at the 2023 NHL Draft – provide a two-headed offensive monster up front for the Cougars.

Ziemmer has been the more active of the two in terms of production this season, ranking second in the league with 33 points (15 goals, 18 assists) in 19 games this season, 21 of which have come during his ongoing 11 game point streak that dates back to late-October.

Heidt, meanwhile, also ranks among the top scorers in the league, recording 29 points on 10 goals and 19 assists through 19 games in 2022.

The Royals will need to do their best to keep the high-flying pair in check in order to pick up some points this weekend.

The Cougars talent is also apparent on the back-end as the team boasts one of the best goaltending duos in the league in the pairing of Tyler Brennan and Ty Young.

Both netminders were selected in the 2022 NHL draft, with Brennan being a fourth round pick (102nd overall) of the New Jersey Devils and Young being selected by the Vancouver Canucks in the fifth round (144th overall).

The first game of the weekend is scheduled for 7:05 pm on Friday, Nov. 18, with game two set for 6:05 pm the following night, Saturday, Nov. 19 at the Save-On-Foods Memorial Centre in downtown Victoria.

The Royals will be hosting multiple exciting promotions at the SOFMC this weekend, with Friday’s game seeing the team celebrating ‘80’s Night’ presented by Trail Appliances, featuring a karaoke contest with a Traeger as a grand prize, live music and a dance team, food and drink specials and more.

Discounts for military members will be made available, including 25% off buffet prices all month at the Lion’s Den Restaurant when booked online with a valid military ID.