ROYALS HOST PINK IN THE RINK ON SATURDAY EVENING; GIANTS IN TOWN THIS WEEKEND 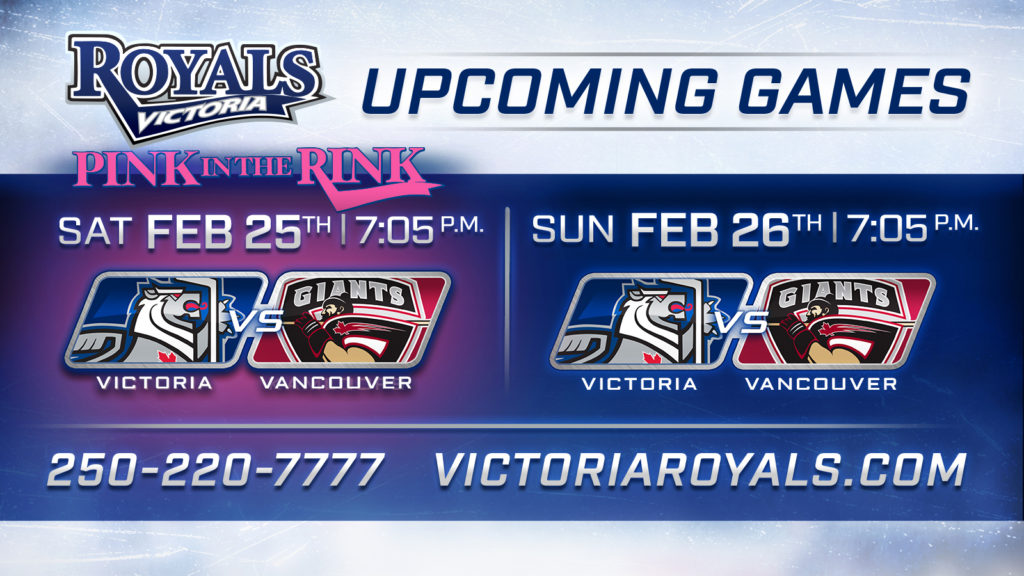 Victoria, BC- The Victoria Royals will host the club’s sixth annual Pink in the Rink Night this Saturday against the Vancouver Giants in support of the BC Cancer Foundation (BCCF), and presented by Speedy Auto Service. Victoria and Vancouver will be in action again the next night, with puck drop for both contests scheduled for 7:05 p.m.

GET ‘EM BEFORE THEY’RE GONE: Tickets to Saturday’s Pink in the Rink Night are still available, but limited quantities remain. Fans are encouraged to buy their tickets in advance at the Select Your Tickets Box Office, online at www.selectyourtickets.com or over the phone at 250-220-7777.

TAKING ON THE GIANTS: So far this season, the Royals have earned a record of 5-0-1-0 against the Vancouver Giants that includes a 2-0-1-0 mark on home ice. In those six games, Victoria has averaged 36.3 shots against, which includes recording over 40 shots on three separate occasions. Matthew Phillips leads the season series for the Royals with nine points (4g-5a) in five games, while Jack Walker and Tyler Soy are tied for the team lead in goals, each with five markers.

SATURDAY – PINK IN THE RINK NIGHT

o The BC Cancer Foundation (BCCF) will be selling raffle tickets at Gate 1 for a roundtrip flight for two to anywhere that WestJet flies in North America. All proceeds go to the BCCF.

– BC Cancer Foundation puck stickers will be available for fans to post on the memory wall by Section 115 by donation to the BCCF.

– CHEK News will also be giving away 200 reusable bags at their display. Fans can enter to win a BC Ferries voucher at the Save-On-Foods display.

– There will be 10 fans chosen by a random seat draw to win maintenance packages from Speedy Auto Service.

– CIBC will be holding a draw, at their kiosk located at Gate 1, for a chance to win a Royals’ jersey.

Promo
– CIBC Centre Ice Challenge
o During Chuck-A-Puck, CIBC will have a target where fans will have the chance to win $500, plus an additional $500 that will be donated to a charity of their choice.

– CIBC will be giving away 600 numbered Percy the Penguin dolls in-stands, where two will be drawn at random to win autographed Royals’ jerseys

– A selection of Royals’ 2017 Pink in the Rink jerseys will be available via silent auction by donation to the BC Cancer Foundation during both games.

– After Saturday’s contest there will be a live jersey auction on the ice for the game worn jerseys of Victoria players, Matthew Phillips, Jack Walker, Ryan Gagnon and Griffen Outhouse. Full schedule and information can be found at www.victoriaroyals.com/jerseyauctions.