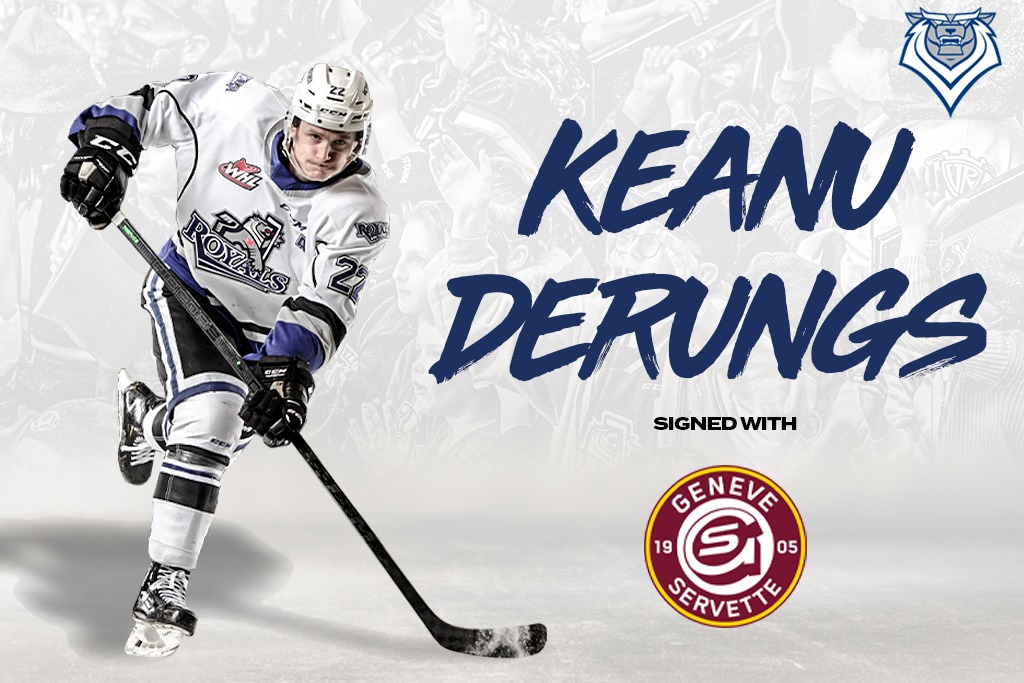 Victoria Royals forward Keanu Derungs has agreed to a two-year professional contract with Genève-Servette HC of the Swiss National League, as announced by the club on Thursday.

The 20-year-old Kloten, Switzerland native will now find himself much closer to home after spending the last three seasons in Victoria as a member of the Royals organization.

“I really appreciate, and I am so grateful that I was able to spend three years in Victoria,” said Derungs. “I learned so much about hockey and also in life. Being away from all my friends and family was definitely hard but it was so worth it looking back. It was definitely one of the best experiences of my life so far.”

“In my three years, I learned what it takes to be a pro hockey player and how important the little things are on and off the ice,” added Derungs. “For that, I would like to thank the whole Royals organization and staff members for giving me this opportunity. There were a lot of tough times obviously with the pandemic starting in my first year and the bubble season in my second year, but at the end of the day that made me appreciate being around the rink even more which is the most important part because you never know when it’s over.”

Prior to his time in Victoria, Derungs was a standout for the Kloten U17 and U20 teams in his hometown, while also making a number of appearances for the Swiss national U17 squad.

He would later become a two-time selection to Switzerland’s U20 team during his junior career, competing in both the 2021 and 2022 World Junior Hockey Championships.

The high-flying forward will now take his talents to the pro level, joining a talented Genève-Servette HC team that features a number of ex-NHL stars including 17-year veteran forward Valterri Filppula and journeyman defenceman Sami Vatanen.

“It means a lot to me, I always dreamed about making my hobby into my job,” said Derungs. “This is just a small step towards my goal of being a pro hockey player because nothing is guaranteed. I have to keep working hard to be able to maintain that as my profession for hopefully many years to come.”

He will also face off against former Victoria Royals forward Tim Traber, who appears in the National League for HC Lugano, as well as former Royals defenceman Jesse Zgraggen, who plays for SC Bern in the same league.

“Hearing that Keanu is achieving his goal of playing professionally in one of the top leagues in the world, marks a proud day for everyone associated with him,” said Royals Assistant General Manager & Associate Head Coach J.F. Best. “It has been a pleasure to watch Keanu develop as a player and a person. He has been a highly-respected and admired member of our group ever since arriving in Victoria.”

“And the fact that his hard work, humility, sacrifice, and perseverance, are being recognized at the professional level is truly well-deserved. He is ready to take this step. The Royals fans, players, and staff are grateful for his time in Victoria, and we all wish him great success at the next level.”

Derungs is expected to begin his first year in the Swiss National League season this fall.

The Victoria Royals are a Canadian major junior ice hockey team in the Western Hockey League (WHL) owned and operated by GSL Group. The Royals play all their home games at Save-On-Foods Memorial Centre and will be entering their 12th season of their existence during the 2022-2023 WHL Regular Season.