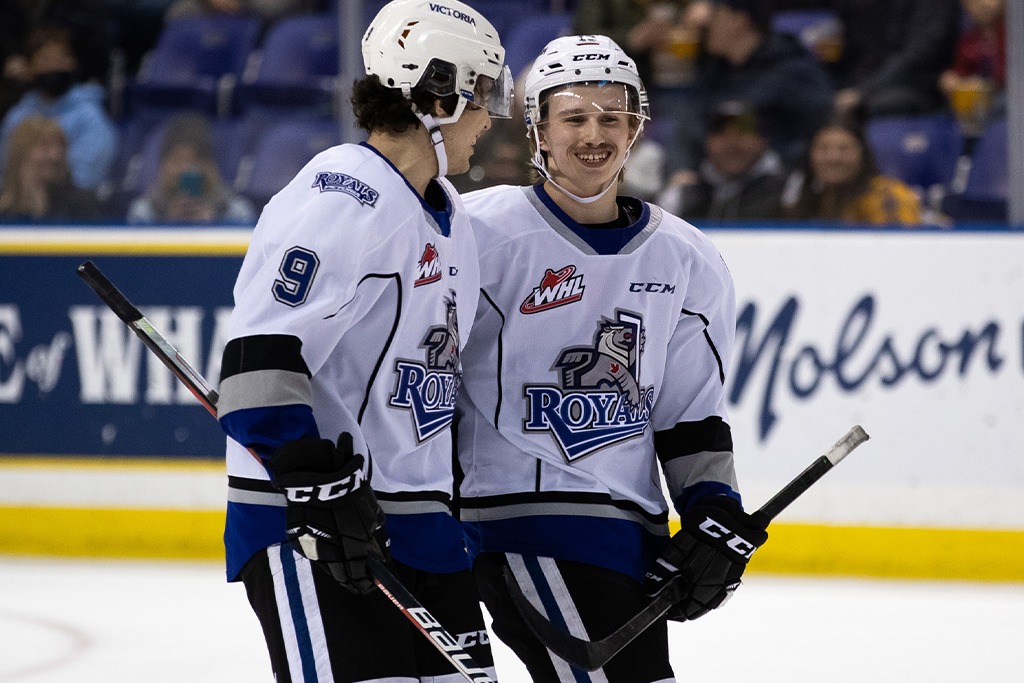 Victoria Royals forward Marcus Almquist scored twice on the way to being named first star in his team’s dominating 7-3 victory over the Spokane Chiefs on Friday night.

The Royals entered the weekend sitting one point shy of a playoff spot, but now move up into eighth in the conference following the win.

While Head Coach Dan Price expressed his satisfaction with his team’s effort on Friday, he won’t be taking too much time to celebrate as his team looks to finish the job tomorrow night:

“It was an important win,” said Price postgame. “But it’s just one small step. Spokane is a really good team, as you saw tonight. Tomorrow is going to be an incredibly difficult challenge, Spokane is going to push with everything they have and so are we.”

Forward Tarun Fizer also had a huge game for his side, registering two assists and an empty-net goal in his first game back from suspension.

He emphasized team speed and preparation as a key to victory on Friday:

“We just played fast,” said Fizer potsgame. “We prepared for Spokane all week, and it showed in the first period. We came out strong and got the hop on them and now we have to do the exact same thing tomorrow.”

Fellow 20-year-old Evan Patrician also put in a strong effort, scoring a goal and adding an assist while winning some key faceoffs down the stretch.

Starting goaltender Tyler Palmer made significant contributions of his own, stopping 25 of 28 shots for his 17th win of the year.

Forward Chase Bertholet was the top performer for the Chiefs, scoring a goal and adding a pair of assists in the loss.

Meanwhile, Spokane goaltender Mason Beaupit had a tough night between the pipes, giving up seven goals on 27 shots, four of which came in the first ten minutes of play.

The Victoria offence came out flying to begin their most important game of the year, scoring four times before the halfway point of the frame to open up a 4-0 advantage.

Forward Evan Patrician would get the party started with his ninth of the year at the 2:26 mark. This would be followed by a Marcus Almquist marker (6) a few minutes later at 5:36.

The Royals continued to pour on with defenceman Gannon Laroque scoring his tenth of the season at 8:43, followed by Almquist’s second of the period (7) at 10:31 to make it 4-0.

However, the Chiefs would mount a late first period rally with forwards Chase Bertholet (24) and Nick McCarry (23) scoring a pair of goals in the span of 29 seconds at 16:13 and 16:42 of the period, cutting the Victoria lead to 4-2 going into period two.

The Royals would re-extend their lead to three with a Bailey Peach goal (37) at 1:07 to start the middle frame, but the Chiefs would pull back within two a few minutes later on a Cade Hays marker (8) at 4:53.

That would be all the offence either team could muster in the second and Victoria would carry a 5-3 advantage into the third.

Victoria’s record now stands at 23-38-5-1 with 52 total points as they reset for their final regular season game on Saturday.

Meanwhile, the Chiefs drop out of a playoff spot for the moment, sitting just one point behind the Royals for eighth place with 51 total points and a 23-39-4-1 record.

Saturday’s game will be a do-or-die contest for both sides as a regulation win for either will ensure a spot in the upcoming postseason, while a defeat will effectively end the losing team’s season and send them home for some early spring rounds on the golf course.

Puck drop for that contest is scheduled for 7:05pm tomorrow night at the Save-On-Foods Memorial Centre in downtown Victoria.

The game on the 16th will be an opportunity for fans to celebrate Marty’s Belated Birthday and Senior Night where we will honour our 20-year-old players.