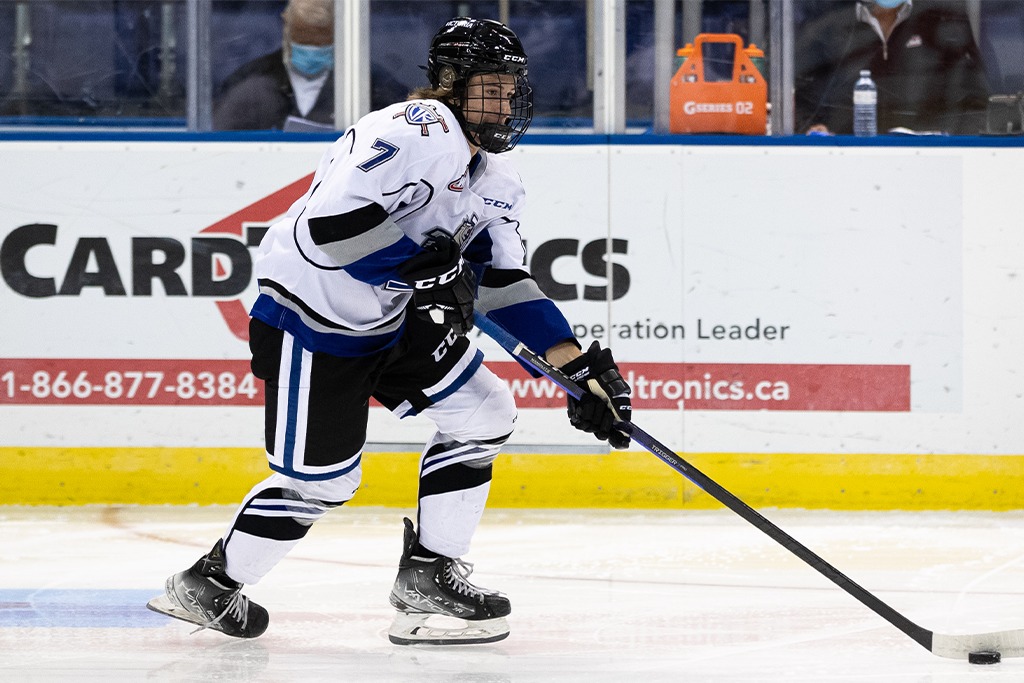 Goaltenders Cunningham and Kraus combined to make 52 saves in the victory.

Forward Carter Briltz tallied two goals as the Victoria Royals downed the Prince George Cougars 5-2 in their preseason opener in Port Coquitlam, BC on Saturday.

The game also saw excellent goaltending performances by rookie goaltenders Logan Cunningham and Jayden Kraus, who split time in net and would combine to make 52 saves in the contest.

Kraus would stop 28 out of the 31 in his half, while Cunningham turned away all 23 attempts after entering the game midway through the second.

Victoria General Manager and Head Coach Dan Price was pleased to see the results of the hard work his netminders put in during camp:

“Youth and goaltending for both teams were the two main storylines in this game,” said Price.  “All three goalies who appeared in the game faced some high quality chances and made some excellent saves. The 06- and 07-born players for both teams also looked very good. It was a physical and competitive game and a good start to the pre-season. Also, Carter Briltz was good on both sides of the puck for us, playing both some centre and some wing. It was nice to see him rewarded with two goals.”

Several other Royals also found their way onto the scoresheet on Saturday, with Cole Reschny, Teague Patton and Luke Shipley all finding the back of the net in the win.

Forwards Terik Parascak and Carter McAdams would count the only two goals for the Cougars, while starting goalie Tyler Brennan would record 25 saves on 29 total shots against.

Victoria would take an early 1-0 lead on a goal by defenceman Luke Shipley at 5:25 of the first period, with 2007-born forward Caleb Matthews on the assist.

The Royals would double up their lead a few minutes later with a marker by Cole Reschny, assisted by fellow 2022 draft pick Grant Reid at 6:58 of the first, making it 2-0.

The Cougars would get on the board at the 12:15 mark of the frame following a powerplay goal by Terik Parascak, cutting the Royals’ lead in half before the end of the first.

Prince George would use another powerplay marker by Carter McAdams to even the game at 2-2 just 54 seasons into the middle stanza, however, Teague Patton’s goal at 6:27 of the third would put Victoria back up by one as the game entered its final 10 minutes. Forward Marcus Almquist would count the assist.

Carter Briltz would stretch the Royals’ lead to 4-2 with his first of the night at 11:11 of the third – with forward Igor Zborovskiy accounting the helper – before providing the nail in the coffin with an empty-net goal at 19:39 to seal the 5-2 victory.

Coach Price believes the win will give his team added confidence as they build towards the regular season:

“Really competitive game,” said Price. “I thought the younger players on both sides played really well, found their footing. The third period started to look like a Western Hockey League game after the first two periods were a bit more scrambly. You could really see the young players adapting and I thought the pace of play and overall organization by the end was really good.”

The Royals will be back on the ice tomorrow night as they face the Vancouver Giants at the Langley Events Centre for their second of four scheduled preseason contests this week. Puck drop is set for 4 pm on Sunday, Sept. 11.

Save-On-Foods Memorial Centre (SOFMC) is designed, constructed, developed and operated by GSL Group. SOFMC is Victoria’s premier entertainment facility and the largest arena in British Columbia outside Vancouver. The state-of-the-art 7,000 seat facility is home to the Victoria Royals of the Western Hockey League and regularly hosts large-scale concerts and other special