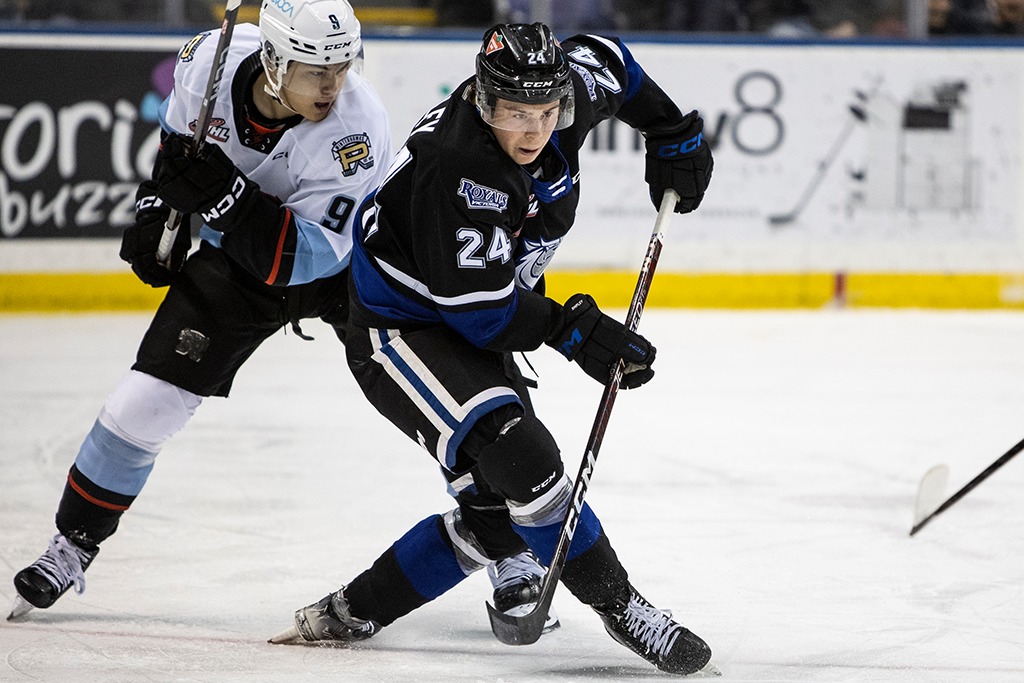 Starting goaltender Tyler Palmer made 42 saves in the contest

Victoria Royals forward Jake Poole scored his 10th goal of the season in a 5-1 loss to the Portland Winterhawks at the Save-On-Foods Memorial Centre on Friday.

The 20-year-old forward has been the team’s most consistent producer this season, collecting six points in his previous five games and totalling 16 points on 10 goals and six assists on the year.

While he has been pleased with his individual effort to this point, Poole remains focused on team success over personal accolades:

“I’d take away all those goals for a win,” said Poole postgame. “It’s kind of bittersweet I guess…Everyone wants to win in there and we take these losses personally. We just have to find our way here and find what we have to do to win games.”

Penalty trouble proved to be the achilles heel of the Royals on Friday, with three of Portland’s five goals coming on the man advantage.

General Manager and Head Coach Dan Price emphasized the importance of staying composed and out of the box as a key to success moving forward:

“It was [a lack of] discipline early that got us on our heels and gave them the lead,” said Price. “It’s very correctable, it takes hard work to be disciplined, be in position and keep your stick down, those kinds of things, especially against such a fast team. But we can do it, we have many times, and we need to do it tomorrow.”

It was also another busy night for Royals goaltender Tyler Palmer, who recorded 42 saves on 47 shots in the loss.

Meanwhile, both forward Robbie Fromm-Delorme and defenceman Luca Cagnoni had big nights for the Winterhawks, each recording two goals in the win, while starting goaltender Dante Giannuzzi saved all but one of the 22 shots he faced in the win.

The Winterhawks would continue to attack, as defenceman Cagnoni (7) would collect back-to-back powerplay markers at the 6:19 and 14:28 to put his team ahead 3-0 heading into the second period.

Portland’s lead would increase in the middle frame, as Fromm-Delorme scored his second goal of the game to bring the score to 4-0 entering the final period.

Victoria (3-13-3-0) would get on the board for the first and only time in the game with a goal by Jake Poole on the powerplay at 5:12 of the third to bring the score to 4-1. Forwards Carter Dereniwsky and Riley Gannon would collect assists on the play.

However, that is as close as Victoria would get as a late powerplay marker by Portland forward Aiden Litke at the 17:51 mark brought the score to 5-1, where it would stand at the final buzzer.

The Royals and Winterhawks will wrap-up their two-game set tomorrow night, where puck-drop is set for 6:05 pm on Saturday, Nov. 12. Tickets can be purchased at selectyourtickets.com.