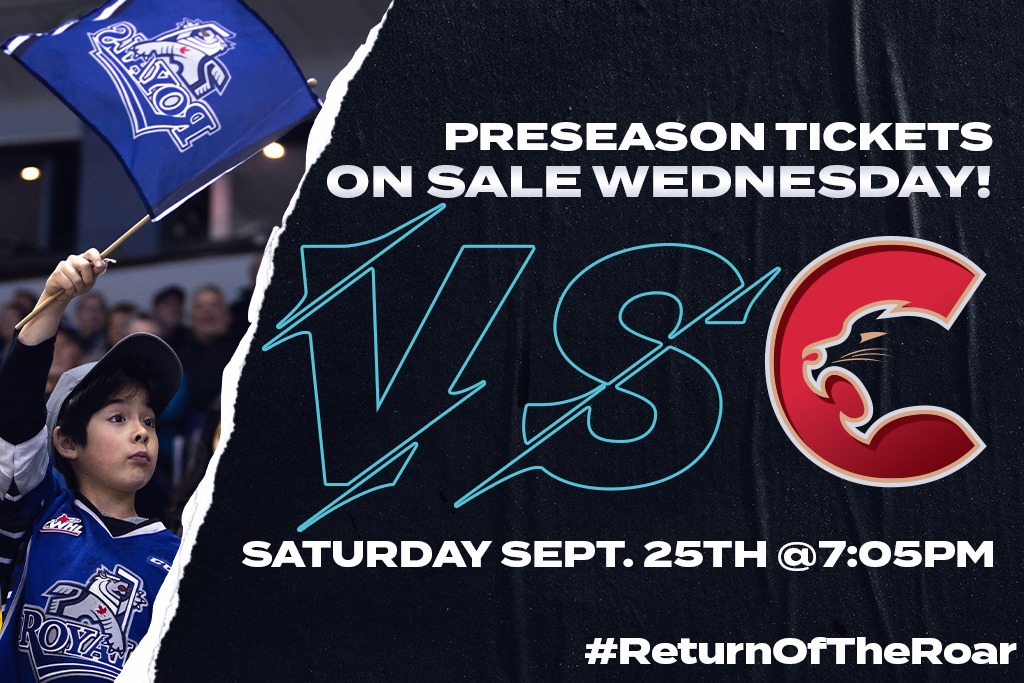 Complimentary Tickets for all Returning and New Ticket Pack Members

The Victoria Royals are excited to announce tickets to Saturday’s preseason home game at Save-on-Foods Memorial Centre against the Prince George Cougars will be on sale on Wednesday, September 22 at 9 a.m.

Saturday’s game against the Cougars will be the first home preseason game held in Victoria in five years. Tickets go live on the Select Your Ticket website at 9 a.m. on Wednesday and are priced between $12 and $14 for any non-club seating (Sections 101-106 and 112-116) or $20 for club seating. Fans can also purchase their tickets by calling the Select Your Tickets box office or stopping by the Save-on-Foods Memorial Centre ticket office between Wednesday, September 22 and Friday, September 24 between 11 a.m. – 4 p.m.

Get tickets to the first preseason home game in 5 years!

In lieu of the annual “Ticket Pick-up/ Team Introduction Night”, the team has also announced a flurry of perks for their new and returning 2021-2022 Ticket Pack Members. Not only will all season ticket, half-season ticket, and fan pack members receive a complimentary ticket (in their seats!) to the game, but they are also invited to attend a special pre-game jersey reveal, pick-up their exclusive #ReturnOfTheRoar socks, as well as enjoy a complimentary concession item before they settle in to catch the Royals take on the Cougars in the final preseason game.

Starting Tuesday September 27th, ticket pack members can pick up their booklets and printed tickets at the Select Your Ticket box office between 11 a.m. – 4 p.m. Tuesday through Friday and 1 p.m. on game day.

The Royals will open their eleventh WHL season at home on Saturday, October 2nd versus the Vancouver Giants. Puck drop for the home opener is scheduled for 7:05 p.m. at the Save-On-Foods Memorial Centre.