Royals put playoff chances on the line in homestand against Chiefs 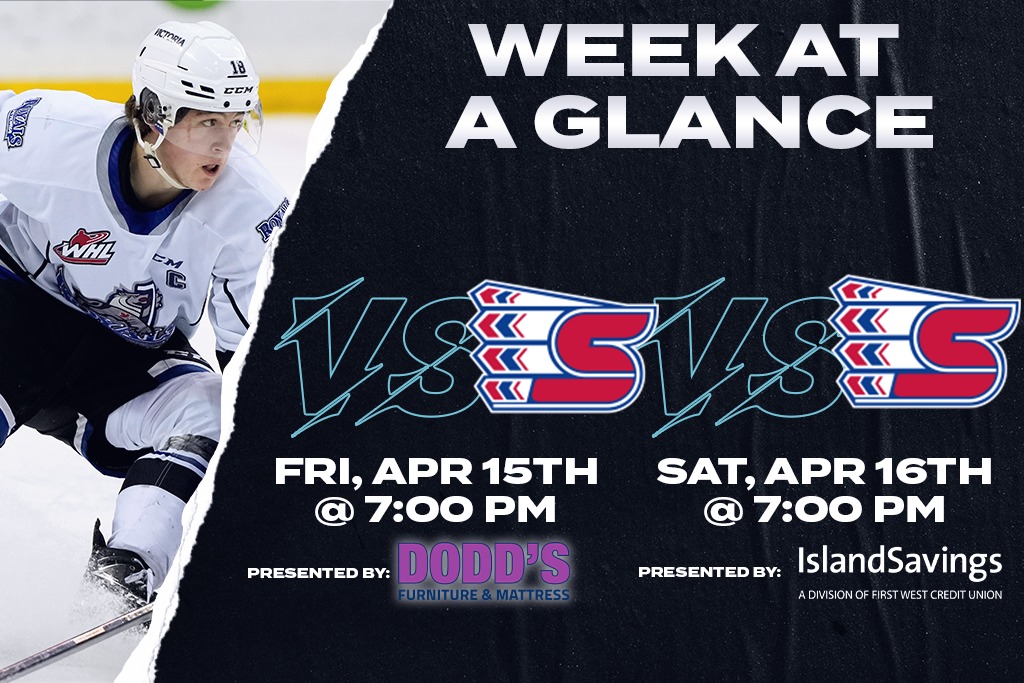 The Victoria Royals will play their two most important games of the 2021-2022 season when they welcome the Spokane Chiefs to town this weekend.

The team’s playoff aspirations took a hit last week as they dropped a pair of road contests to the Kamloops Blazers and Prince George Cougars, losing both on late third period game-winning goals.

Victoria finds themselves on the outside looking in for the moment, sitting in ninth place in the Western Conference with a 22-38-5-1 record with 50 total points on the season.

However, a playoff spot remains within reach as they trail both the Chiefs and Prince George by just a single point and sit only two points shy of the Vancouver Giants, who occupy sixth place in the conference.

There are still a number of paths to the postseason for the Royals. Two wins would all but secure their spot, a win and a loss would give them a high chance, while two losses would effectively eliminate them from contention. Simply put, it’s a do-or-die weekend for Victoria.

Head coach Dan Price gave his best impression of a fight promoter hyping up a heavyweight title match when asked about the significance of this weekend’s games:

“It feels like a date with destiny,” said Price following practice on Wednesday. “Here we are in the final weekend of the regular season, mid-April, in Victoria, at home versus Spokane. Two games, with both teams fighting for playoff position. It’s just the best, it’s so much fun.”

The comforts of home should give the Royals a leg up on their opponents this weekend, having won five of their last six contests in the friendly confines of the Save-On-Foods Memorial Centre.

The team will also benefit from the return of captain Tarun Fizer, who sat out the last three contests while serving a suspension for a knee-on-knee hit against Prince George back on Mar. 26. With 47 points (15 goal, 32 assists)  in 33 games this season, the Chestermere, AB native should add an extra dimension to a Royals’ offence that has struggled the past few games in his absence.

Fizer hopes his return can help his team get back on track after a tough road swing:

“Obviously I would’ve liked to be in those games,” said Fizer after practice Wednesday. “We were on a bit of a roll, then I got taken out and we lost all those games. It hurts to watch, especially in your 20-year-old season, but I’m very happy to be back.

Coach Price has high expectations for his 20-year-old forward this weekend:

“There’s just an energy he brings,” said Price. “A certain mindset, a speed he brings. The whole group is that way, it’s a reflection of his leadership…When he’s on the ice, getting regular shifts and pushing the pace, his influence is tangible.”

The play of leading scorer Bailey Peach will be another X-factor in Victoria’s performance against Spokane. The Falmouth, NS product has continually stepped up in big moments all season, posting 77 points (36 goals, 41 assists) over 64 games this year. His team will need him more than ever if they are to make their playoff dreams a reality this weekend.

Another player to keep an eye on for the Royals this weekend is rookie forward Marcus Almquist, who has provided some quality offensive minutes for his team over the past few weeks, recording four goals over his last seven contests after scoring just once in his first 33 games in 2021-2022.

Finally, the team will hope to squeeze a pair of big games out of goaltender Tyler Palmer, who has lost his last three starts after posting four straight wins toward the end of March.

The Fernie, BC native has been one of the most valuable players for the team all season, posting a 16-22-3 record with a 3.48 goals against average (GAA) and a .909 save percentage (SV%) over 43 appearances.

Palmer and the Royals will hope to put a stop to a streaking Spokane team that comes into the weekend having won four of their last five contests against some quality Western Conference opponents.

The Chiefs have amassed a 23-38-4-1 record with 51 points on the season and currently sit in a tie for seventh place in the standings.

They are led on offence by the talented 20-year-old forward Bear Hughes, who leads the team with 66 points (24 goals, 42 assists) over 66 games this season and enters the weekend riding a five-game point streak.

Another player to watch for Spokane is defenceman Graham Sward, who has registered nine points over the last ten contests and leads all Chiefs’ blueliners with 43 points on 10 goals and 33 assists.

The expected starter between the posts for Spokane is Surrey, BC product Mason Beaupit. The 20-year-old net-minder has shouldered a big load for his team of late, starting every one of the last six games, and winning four. In total, he has recorded a 3.62 GAA, a .894 SV% and a 19-21-1 record over 47 appearances in 2021-2022.

The first game of the weekend will get underway on Friday, Apr. 15, with the second taking place the following night, Saturday, Apr. 16. Puck drop for both games is scheduled for 7:05pm at the Save-On-Foods Memorial Centre in Downtown Victoria.

Friday’s contest will be a Superhero Salute where the Royals will recognize local heroes and frontline workers. Members of the Victoria HarbourCats will also be present for a meeting and greet.

The game on the 16th will be an opportunity for fans to celebrate Marty’s Belated Birthday and Senior Night where we will honour our 20-year-old players. The Royals will also be working with charitable group, Rise Together, to collect Easter themed items that will be donated to the 1Up Up Single Parent Resource Centre.