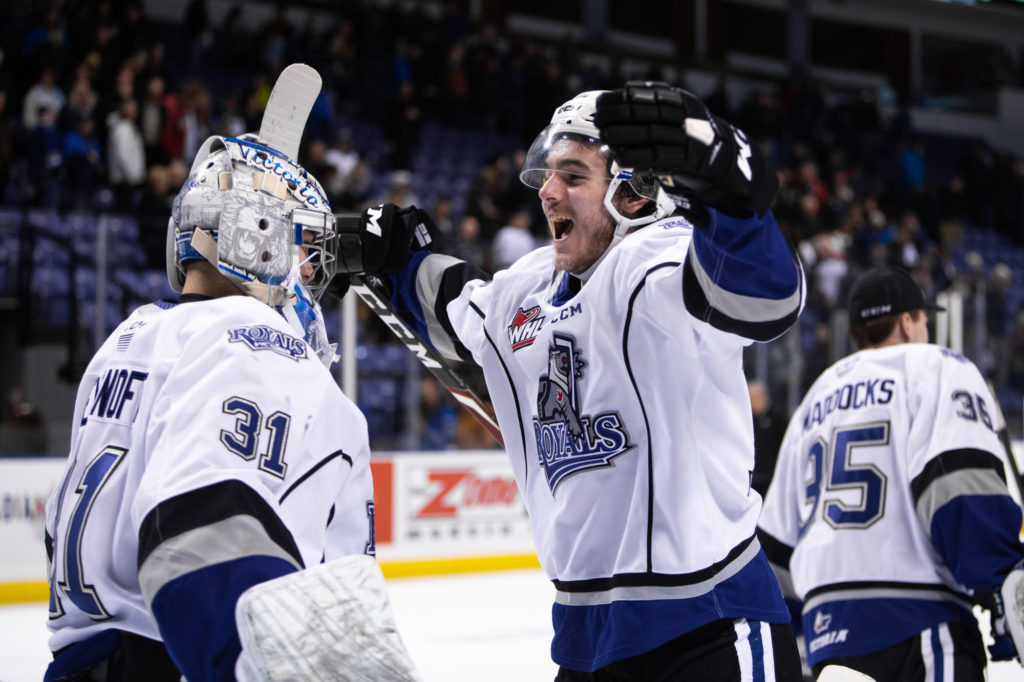 Victoria, BC – The Victoria Royals scored three unanswered goals in the third period, and goaltender Adam Evanoff made 37 saves, to down the Red Deer Rebels 3-1 on Tuesday night for the club’s fourth straight win.

Notes:
Multi-goal Games: In contests where a Royals’ forward has scored two or more goals, the team holds a record of 11-0-1-1 and have averaged 4.16 goals per game. This season, Victoria has had eight different players record multi-goal games. Brandon Cutler leads the Royals in multi-goal games with four.
Former Team: Victoria’s Jacob Herauf and Brandon Cutler played against their former team tonight. Herauf spent three seasons (2016-19) with the Rebels where he recorded 39 points (3g-36a), while Cutler earned seven goals and seven assists in two years (2016-18). Herauf was acquired by Victoria in the off-season from Red Deer in exchange for three draft picks. Meanwhile, Cutler was traded to Victoria in September 2018, along with a second round pick, in exchange for unsigned prospect Dallon Melin and a fifth round pick.
Familiar Faces: Red Deer forward Dallon Melin was originally drafted by the Royals in the second round, 32nd overall, in the 2017 WHL Bantam Draft. Prior to their WHL careers, Melin and Rebels’ teammate Chase Leslie played with Royals’ defenceman Noah Lamb and forward Ty Yoder on the Camrose Red Wings Bantam AAA team of the Alberta Major Bantam Hockey League during the 2016-17 season.
Hot Streak: In tonight’s game, Royals’ forward Kaid Oliver extended his point scoring streak to four games. He has recorded three goals and two assists in those contests.
Up Next: Victoria will begin a three-game road trip Friday night in Langley against the Vancouver Giants at 7:30 p.m. The team will then head to Kamloops for a pair of games on Saturday and Monday afternoon versus the Blazers. Puck drop is at 7:00 p.m. on Saturday and 2:00 p.m. on Monday.

Back at the Barn: The Royals will return home on Wednesday, February 19th to battle the Calgary Hitmen in the only regular season match-up between the two clubs. Puck drop is at 7:05 p.m. Tickets can be purchased in person at the Select Your Tickets box office, over the phone by calling 250-220-7777, or online at www.selectyourtickets.com.