Royals Resilient in 6-4 Loss to Rockets 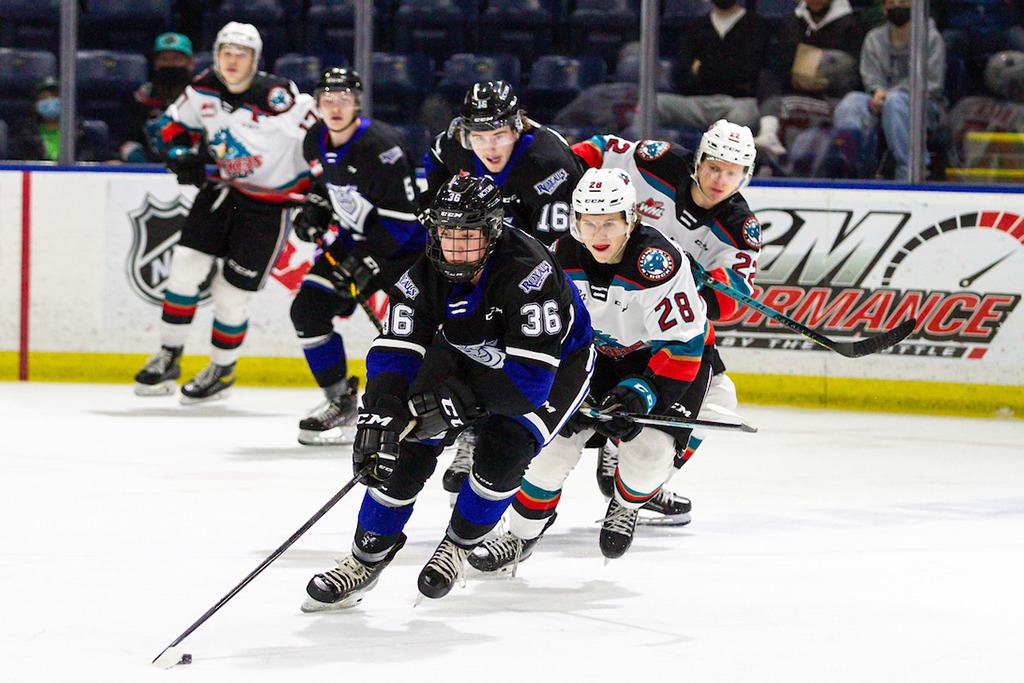 This was the first game back for Victoria after a two-week pause due to COVID-19 protocols. The team was without several players due to injury including captain Tarun Fizer, Keanu Derungs and Tanner Scott, but had a boost of energy with Austin Zemlak’s return.  Zemlak had been out of the Royals lineup with an injury since October.

Brayden Schuurman and Bailey Peach extended their point streaks tonight. Schuurman had a four-point night bringing his tally to 12 points in five games while Peach, who earned the third star of the night, now has 21 points in seven games after scoring a goal and an assist.

Jake Poole scored the opening goal of the game with assists from Pavel Novak and Andrew Cristall to put the Rockets up 1-0.  With under ten minutes to go, the Rockets looked like they would get their second of the night on a two-on-one rush, but Tyler Palmer was there with two incredible saves, to keep it a 1-0 game.

Right off the bat in the second, Riley Gannon had an incredible chance that was denied by Rockets goaltender Talyn Boyko. Midway into the second, both teams had only one shot on net when Luke Shipley took a penalty for cross-checking. With the Rockets on the power play, they scored their second of the night from Pavel Novak assisted by Colton Dach and Tyson Feist. A minute later, Dylan Wightman put one past Palmer on the rebound with assists from Caden Price and Scott Cousins to put Kelowna up 3-0.

Victoria continued to play aggressively and 30 seconds after the third Rockets goal, Schuurman scored with assists from Peach and Anthony Wilson to get the Royals on the board. After seven minutes of back-and-forth play, Turner McMillen shoveled the puck behind Palmer with assists from Max Graham and Marcus Pacheco to make it a 4-1 game for the Rockets to end the second.

The third period started off with four-on-four when the Rockets took a penalty for too many men to make it a four-on-three situation for just over a minute. Right off the face off, Kelowna took another penalty for delay of game and with the two-man advantage, Peach was able to put one past Boyko to cut the lead in half with assists from Gannon Laroque and Schuurman. Less than a minute after Peach’s goal, Gannon scored his first of the night assisted by Schuurman and Laroque, edging the Royals closer to the Rockets in a 4-3 game.

The scoring frenzy continued when Scott Cousins made it a 5-3 game for the Rockets with assists from Noah Dorey and Pavel Novak with 14 minutes to go. Poole scored his second of the nigh and sixth for the Rockets and assisted by Adam Kydd and Dach with just under eight to go in the period. With two and a half minutes to go, the Royals were back on the power play when Schuurman scored his second of the night to make it a 6-4 game with assists from Gannon and Laroque. The period ended with the Royals pulling Palmer for the extra attacker, but they were unable to score ending the game 6-4 for the Rockets.

Palmer made 21 saves on 27 shots tonight for the Royals while Boyko made 38 saves on 42 shots for the Rockets.

Royals GM and Head Coach Dan Price lauded his team for their efforts tonight and is optimistic for tomorrow’s rematch.

“The players put in a great effort tonight. Kelowna played well and capitalized on their chances. We had some excellent chances that just missed. The level of competitiveness never diminished, even when we were trailing by three,” Price said. “Luke Rybinski was excellent in his first game as a Royal, as was Austin Zemlak in his return from a long absence. Anthony Wilson was buzzing and Alex Edwards earned some good minutes too. As a team, we’ll clean a few things up defensively tomorrow and I know the guys will have great energy for the rematch.”

The Royals play the Rockets again tomorrow night and then head to Prince George to face the Cougars Tuesday and Wednesday.

The Royals are back on home ice January 21st against the Vancouver Giants for Bell Let’s Talk Night, a game that supports the annual “Bell Let’s Talk’ campaign designed to break the stigma surrounding mental illness and to support mental health across Canada. Then on Saturday the 22nd, the Everett Silvertips are in Victoria for the Royals Halfway to Summer Jam presented by Molson.

The Royals are also offering two holiday ticket packages for fans this season. Buy four vouchers for $70 or six for $100 and receive a special Royals gift. This offer is valid until January 31, 2021.