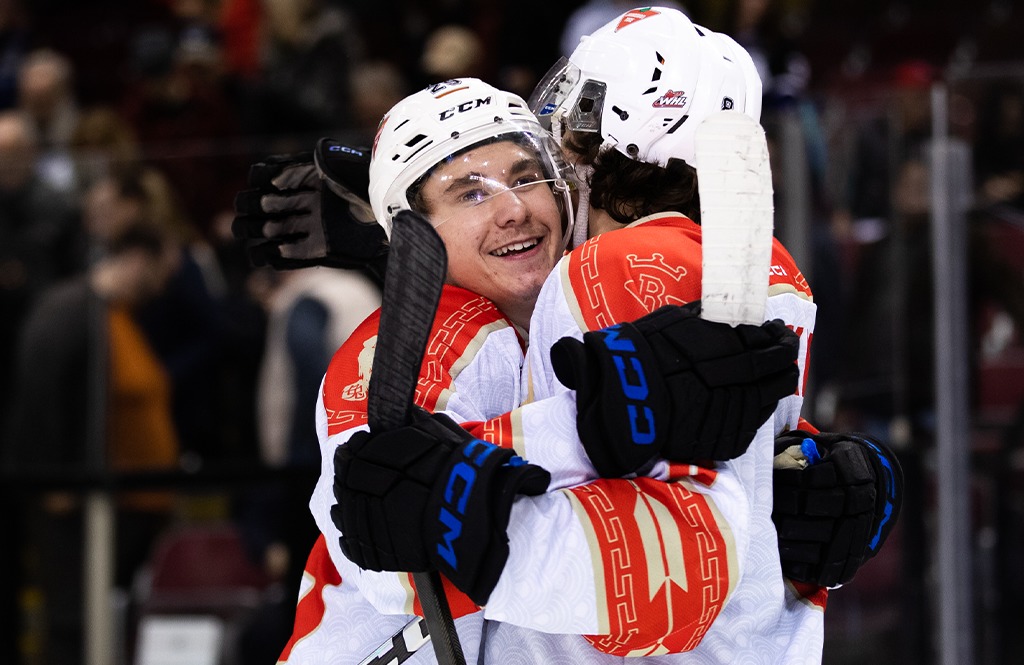 Forward Matthew Hodson recorded a game-high three points with two goals and an assist as the Victoria Royals defeated the Kelowna Rockets 6-3 on Saturday night at the Save-On-Foods Memorial Centre.

The Saskatoon, SK product has been one of the most consistent producers for the club since the new year began, tallying seven points (three goals, four assists) over his last five contests. He currently ranks fifth on the team in scoring with 11 goals and 10 assists for 21 total points on the season.

While he is happy to enjoy the individual results, Hodson’s priorities remain focused on helping his team win:

“I was just skating well,” said Hodson postgame. “I have to give a lot of credit to my linemates, they opened up a lot of the ice for me…It’s awesome, we really wanted those games, especially being so close to Kelowna in the standings. Those are big wins.”

The game also saw Royals 2022 import selection Robin Sapousek record his first career WHL goal, coming early in the second period to give Victoria their first lead of the game.

It was an unforgettable moment for the Czech-born forward:

“It’s really amazing,” said Sapousek postgame. “I didn’t think it went in…After the season I will put it [the puck] on a desk at my home, it will be good…It’s good for our team and we have a really good group and I hope these wins push us to have more good games.”

Victoria also benefited from multi-point performances by forwards Jake Poole (two assists) and Tanner Scott (one goal, one assist), while starting goaltender Braden Holt made 27 saves on 30 shots on the way to his fifth win in a Royals uniform.

With his team now only a single point out of a playoff spot after back-to-back wins, General Manager and Head Coach Dan Price is happy to see his club round into form as they enter the final few months of the season:

“Very proud of the evolution of the team,” said Price postgame. “The guys stayed very calm through some very difficult challenges at the start of the year…It’s good to see us start to get some rhythm and confidence, structure and consistency. I’m very proud of the maturity level and calmness among the group, but, as I mentioned, there’s still a lot of work to do.”

Forward Max Graham was the top scorer for Kelowna in the defeat, registering a pair of goals, while goaltender Jari Kykkanen made 21 saves on 27 total shots.

However, the Royals would soon respond with a goal of their own by forward Matthew Hodson (10), who redirected a point shot by defenceman Austin Zemlak at 15:56 of the period to even the game at 1-1 heading into the second.

Forward Jake Poole would also count an assist on the goal, extending his point streak to three games.

Victoria would carry the momentum into the middle frame, taking the lead early in the period on forward Robin Sapousek’s first career WHL goal at the 0:32 mark, assisted by forward Reggie Newman and defenceman Justin Kipkie.

The Royals would then increase their lead to 3-1 on a marker by Riley Gannon (12) at 7:55 of the second–with forward Tanner Scott on the assist–before opening up a commanding 4-1 lead on a subsequent marker by forward Alex Edwards (3) at the 13:20 mark.

Jake Poole and Matthew Hodson would pick up assists on the play.

However, the Rockets would pull back within two before the end of the frame, with forward Dylan Wightman (7) collecting his team’s second powerplay goal of the game at 16:53 of the second.

Tanner Scott (8) would put the Royals back up by three to begin the third period, striking on the powerplay at the 1:28 mark of the frame. Defeneman Nate Misskey would collect the lone assist on the goal.

That would be followed by the second goal of the night from Rockets forward Max Graham (10) at 7:18 of the period to bring the score to 5-3 as the game entered its final minutes.

However, Victoria would seal the win on a late marker by Matthew Hodson (11) at the 14:23 mark of the third–assisted by forward Teagu Patton and defenceman Kalem Parker–to bring the score to 6-3, where it would stand at the final buzzer.

Looking ahead, Kelowna will have the next five days off as they prepare for a road contest against the Vancouver Giants next Friday night in Langley.

Meanwhile, Victoria will hit the road for a midweek contest against the Tri-City Americans, set for this Wednesday, Jan. 18, at the Toyota Centre in Kennewick, WA.

Multiple ticket packages are available for purchase, including a Family Pack, Group Tickets, VictoriaNow Family Section, Vizzy Section and Molson Ice Seats. Call our ticket office at 250-220-7889, send an email to tickets@victoriaroyals.com or visit our website to learn more victoriaroyals.com/ticket-promos.