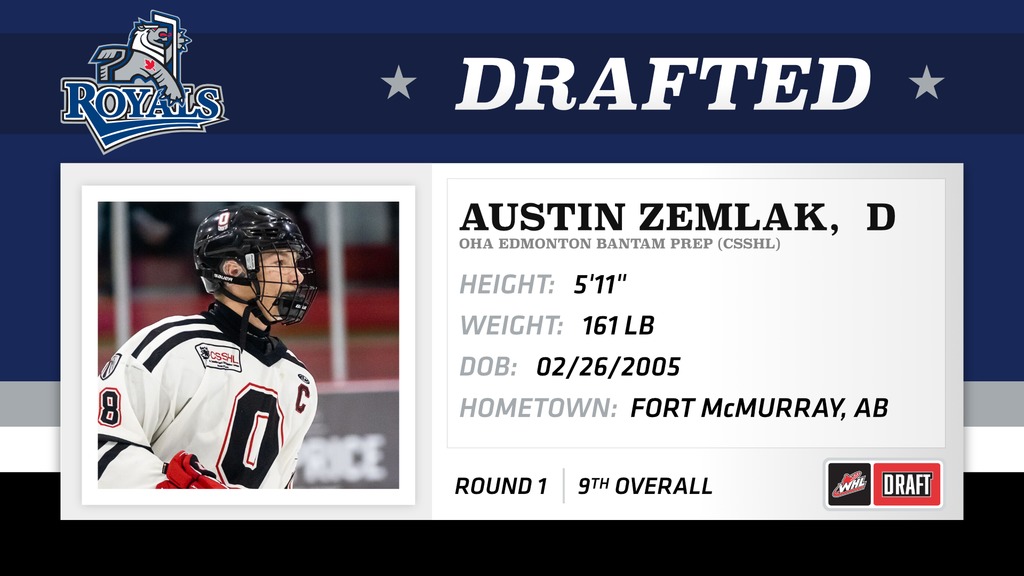 Victoria, BC – The Victoria Royals are proud to announce the selection of defenceman Austin Zemlak with the team’s first pick, ninth overall, in the 2020 WHL Bantam Draft.

The product of Fort McMurray, AB spent the 2019-20 season with the OHA Edmonton Bantam Prep team of the Canadian Sport School Hockey League (CSSHL). Zemlak, the team’s captain, played in 27 games for OHA Edmonton where he earned 36 points (8g-28a) to go with 22 penalty minutes. His 28 assists led the team, while he finished second in team scoring.

“Austin is a strong, versatile defenceman who plays the game with skill and purpose. He is a mobile skater who thinks and plays the game at a high pace,” President and General Manager Cameron Hope said. “He has a bright future in the WHL, and we are excited to welcome Austin and his family to the Royals.”
This season, the 5-11, 161 lb blueiner was a finalist for the CSSHL’s Bantam Prep Division Top Defenceman of the Year Award.

The WHL Bantam Draft is an annual event in which the clubs of the Western Hockey League select players who have graduated from bantam. For the 2020 draft, players born in 2005 are eligible. The Draft order is determined by way of points in the regular season, which excludes teams that missed the WHL Playoffs. Those organizations are placed into a draft lottery for the first round only. Apart from the lottery results in the first round, teams will select in order of fewest to most regular season points.