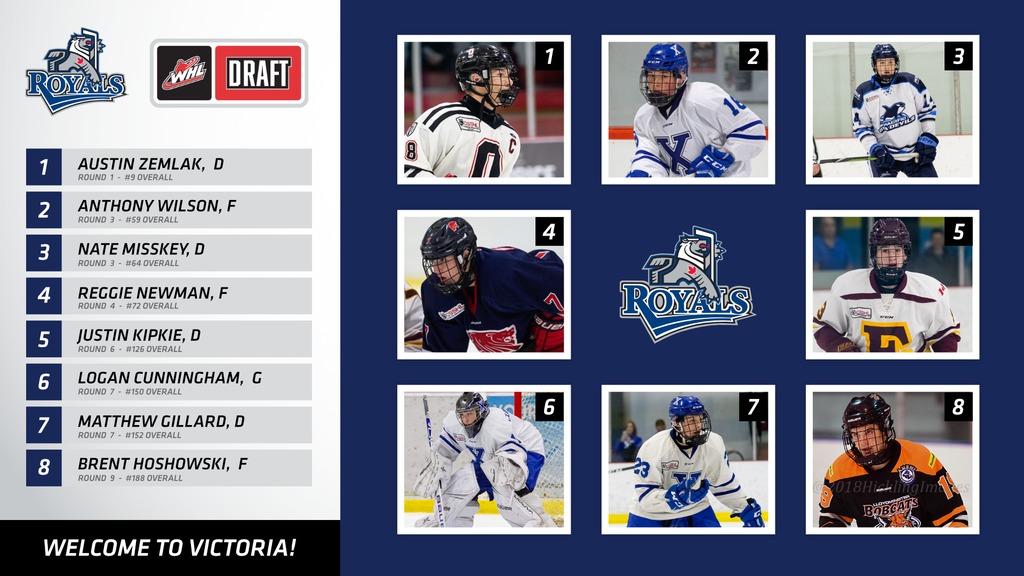 Victoria, BC – The Victoria Royals are proud to announce the selection of eight players at the 2020 WHL Bantam Draft.

Victoria’s eight draft picks were comprised of four skaters from Alberta, two players from Saskatchewan, and one from each of British Columbia and the Northwest Territories. By position, the Royals drafted four defencemen, three forwards and one goaltender.

The Royals used their first pick, ninth overall, to select Fort McMurray, AB native Austin Zemlak from the OHA Edmonton Bantam Prep team of the Canadian Sport School Hockey League (CSSHL). Zemlak, the team’s captain, played in 27 games for OHA Edmonton where he earned 36 points (8g-28a) to go with 22 penalty minutes. His 28 assists led the team, while he finished second in team scoring.

“Austin is a strong, versatile defenceman who plays the game with skill and purpose. He is a mobile skater who thinks and plays the game at a high pace,” Royals’ President and General Manager Cameron Hope said.

With the 59th overall pick, Victoria chose 5-8, 166 lb forward Anthony Wilson from the CSSHL’s Northern Alberta Xtreme Bantam Prep team. During the 2019-20 season, Wilson recorded 27 points (9g-18a) and 46 minutes in penalties over 29 games. The native of Swift Current, SK finished fifth in scoring amongst his team.

“Anthony has dynamic speed and competes hard in all areas,” Royals’ Senior East Regional Scout Garry Pochipinski said. “He is able to create offensive chances with his ability to push the pace of play.”

For their second selection of the round, the Royals took defenceman Nate Misskey with the 64th overall pick in the draft. In his most recent campaign, the native of Melfort, SK tallied 30 points (8g-22a) and 52 penalty minutes over 30 contests with the Langford, BC based Pacific Coast Hockey Academy (PCHA) of the CSSHL. The the 6-1, 183 lb blueliner’s 30 points led PCHA in defensive scoring.

“Nate is a smart defender, who gets to pucks quickly and can make great passes under pressure,” Pochipinski said.

In the fourth round, 72nd overall, Victoria selected Kamloops, BC product Reggie Newman from the Yale Hockey Academy Bantam Prep team of the CSSHL. The 5-11, 166 lb forward played in 21 games for Yale last season where he accumulated 22 points (9g-13a) and 70 minutes in penalties.

The Royals used their 126th overall pick to draft defenceman Justin Kipkie from the Edge Bantam Prep team of the CSSHL. This past season, Kipkie played in 30 regular season games where he recorded eight goals and 17 assists, to go along with 16 penalty minutes. The product of Calgary, AB led his team in scoring by a defenceman with 25 points.

“Justin is an intelligent defender that understands the position,” Royals’ Director of Player Personnel Ed Fowler said. “He stays on the right side of the puck and joins the rush offensively,”

With the 150th selection, Victoria chose Sherwood Park, AB native Logan Cunningham. The 5-11, 155 lb goaltender played for the Northern Alberta Xtreme Bantam Prep team of the CSSHL. Cunningham post a 14-4-0 record, a 2.95 goals against average (GAA), a 0.901 save percentage (SV%) and one shutout in 18 games. He finished the season ranked third in the league amongst netminders in wins and fifth in both GAA and SV%.

“Logan is an athletic goaltender with great size and focus that allows him to compete to find pucks in traffic,” MacGregor said.

Victoria’s second pick of the round, 152nd overall, was used to draft Yellowknife, NT product Matthew Gillard of the CSSHL’s Northern Ablerta Xtreme Bantam Prep team. The 5-8, 132 lb Gillard tallied 17 points (7g-10a), to go along with 50 minutes in penalties in 23 games.

“Matthew is a physical defender who looks after the defensive zone first,” Fowler said. “He has quick, agile feet and plays with poise.”

With the 188th overall draft pick, the Royals selected forward Brent Hoshowski from the Lloydminster Bobcats of the Alberta Major Bantam Hockey League (AMBHL). In 31 games played for the Bobcats, the 5-11, 180 lb Hoshowski collected 35 points (18g-17a).

“Brent is a hardworking forward, who plays a physical game and is willing to go hard to net,” Fowler said. “He has quick hands and can score.”

The WHL Bantam Draft is an annual event in which the clubs of the Western Hockey League select players who have graduated from bantam. For the 2020 draft, players born in 2005 were eligible. The Draft order was determined by way of points in the regular season, with the exception of teams that missed the WHL Playoffs which are placed into a draft lottery for the first round only. With the exception of the lottery results in the first round, teams selected in order of fewest to most regular season points.