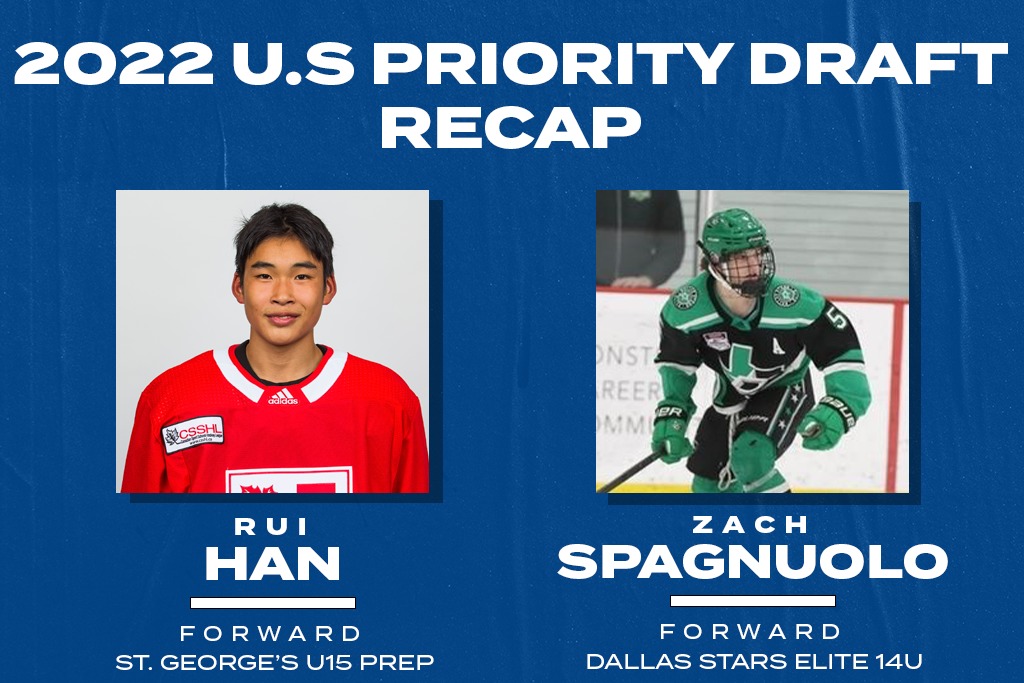 The Victoria Royals used both their picks in Wednesday’s WHL US Priority Draft to select forwards, choosing San Diego, CA native Rui Han in the first round and Dallas, TX product Zach Spagnuolo with their second round pick.

The US Priority draft is an annual event where WHL teams can secure the rights to the top hockey talent in the twenty States within the WHL recruitment territory.  All 2007-born US prospects in the States of Alaska, Arizona, California, Colorado, Hawaii, Idaho, Kansas, Minnesota, Montana, Nebraska, Nevada, New Mexico, North Dakota, Oklahoma, Oregon, South Dakota, Texas, Utah, Washington and Wyoming were eligible to be picks in Wednesday’s draft.

The Royals used the seventh overall pick to select forward Rui Han out of San Diego, CA. The 15-year-old played his 2021-2022 season with St. George’s School of the Canadian School Sport Hockey League (CSSHL) where he registered 35 points on 20 goals and 15 assists over 20 games with their U15 Prep squad. He also spent some time playing a level up at St. George’s, appearing in 10 games between their U17 and U18 Prep teams. Han stands at 5’8”, 140lbs and is a left-hand shot.

The team believes his unique skill set can make him a valuable scoring threat in the WHL:

“Rui has very good speed and agility to go with a quick and accurate shooting release,” says Royal’s Director of Player Personnel, Ed Fowler. “He’s great in traffic, knows how to get to scoring areas, and demonstrates the ability to finish when he gets there. We’re looking forward to building a relationship with Rui and his family, and we feel he can become an excellent goal scoring forward, who is also effective on the defensive side of the puck.”

Victoria would then select forward Zach Spagnuolo from the Dallas Stars Elite 14U of the Tier 1 Elite Hockey League with their second round pick (#38 overall). At only 15-years-old, the Dallas, TX native is already a sizable presence on the ice, standing at 6’0”, 168lbs.

Apart from his size, Spagnuolo’s versatility on the ice and ability to play a 200-foot game make him a valuable addition to the Royals prospect pool:

“Zach is primarily a centre who controls the middle of the ice well and is tough to beat in the faceoff circle,” says Fowler. “But he is effective in all areas of all three zones. He is a hard worker who uses his size, power and athleticism to his advantage, and his touch with the puck is impressive. We’re excited to get to know Zach and his family better, and we look forward to partnering with them in his development.”

With the US draft behind them, the team will now prepare for Thursday’s WHL Prospects Draft where they own the third overall pick of the first round.