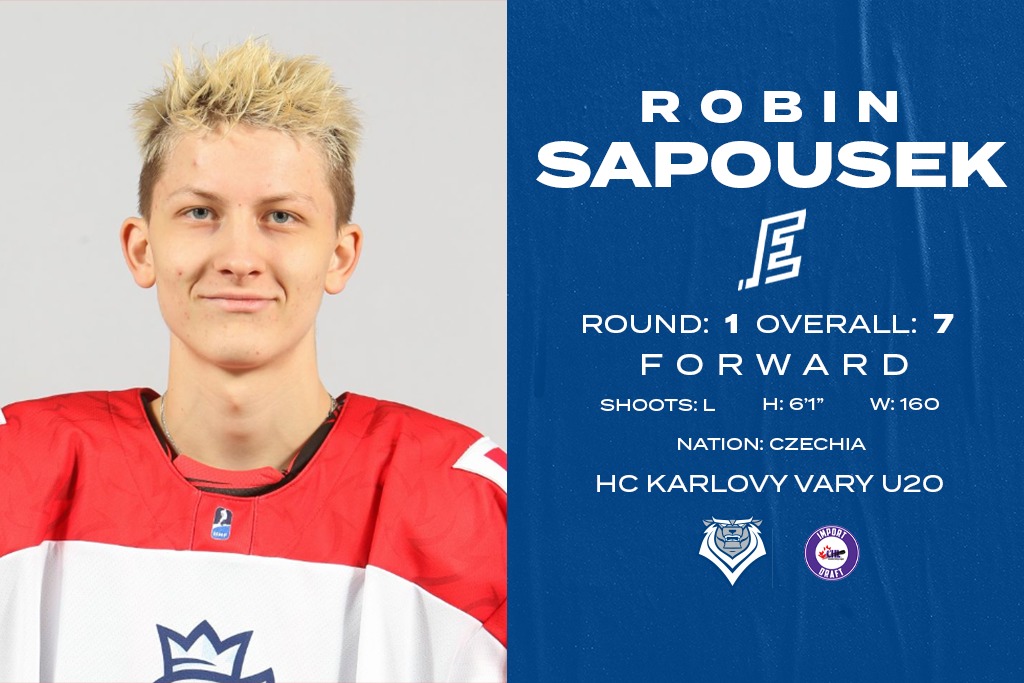 The Czech-born forward is listed as the 125th ranked European Skater in the latest NHL Central Scouting draft rankings.

The Victoria Royals used the seventh pick in the 2022 CHL Import Draft to select forward Robin Sapousek from HC Karlovy Vary U20 of the Czech junior league.

He appeared in 20 games for HC Karlovy Vary U20 in the 2021-2022 season where he registered five goals and eight assists for 13 total points.

Sapousek is also a multi-time selection to Czechia’s junior international teams, appearing for their U16, U17, and most recently for their U18 squad at the 2022 IIHF U18 World Championships held in Germany this past April. Sapousek would aid the Czech team to a fourth-place finish at the tournament.

“Robin is a quick and intelligent player who distributes the puck well and, although a natural centre, can play all three forward positions,” said General Manager and Head Coach Dan Price. “He contributes on both sides of the puck and in all phases of the game, and he is hard working and highly competitive. He is also a high character person; he has a reputation as a great teammate with a winning mentality, and as someone who is always working to improve and evolve his game.”

Sapousek also has some experience playing at the professional level in the Czech Extraliga, appearing in a pair of games for HC Energie Karlovy Vary during the 2020-2021 season.

Sapousek has been listed as the 125th ranked European skater by NHL Central Scouting in their final 2022 pre-draft prospect rankings and was ranked as high as 109th on the midterm list.

Armed with valuable international experience and strong playmaking ability, Sapousek is someone who could make an immediate impact for Victoria in the upcoming 2022-2023 season.

“Robin has an impressive international pedigree with Czechia’s national program, and in fact competed against fellow Royals, Brayden Schuurman and Kalem Parker, in the 2022 U18 World Championship in Germany this April,” added Price. “We’re thrilled to have been able to select Robin in this year’s draft and we look forward to welcoming him to the Royals and to Victoria.”