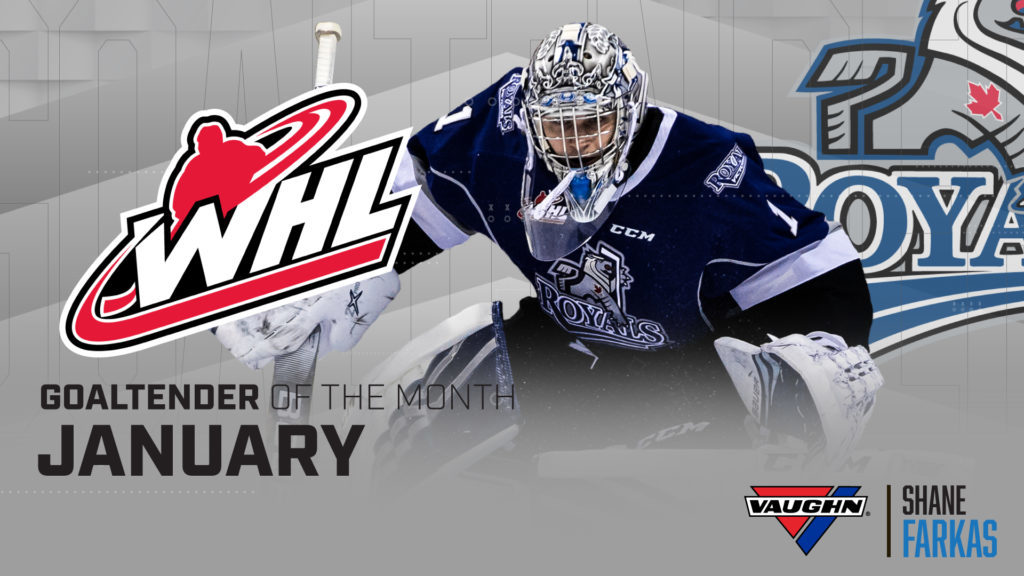 Victoria goaltender recorded five wins, a 1.12 goals against average, a 0.964 save percentage and two shutouts in six games.

Victoria, BC – The Western Hockey League today announced that Victoria Royals’ netminder Shane Farkas has been named the WHL Vaughn Goaltender of the month for January 2020.

The product of Penticton, BC earned the award after he appeared in six games for Victoria and posted a 5-0-0-0 record. In those contests, Farkas registered a 1.12 goals against average (GAA), a 0.964 save percentage (SV%) and two shutouts.

The 1999-born goaltender stopped 162 of the 168 shots he faced this month, that began with a 29-save shutout performance in a 1-0 victory over the Vancouver Giants on January 1st. Throughout the month, Farkas also earned recognition as the WHL Eli Wilson Goaltending Goaltender of the Week for the week of January 6th-12th. This marks the first time in his WHL career that the 6-2, 187 lb netminder has been named WHL Vaughn Goaltender of the Month.

So far this season, Farkas has collected a 18-7-1-0 record, a 2.20 GAA, a 0.929 SV% and two shutouts in 28 games for Victoria. Those numbers rank him second in the WHL in save percentage, fourth in goals against average, fifth in wins and tied for 11th in shutouts.

The Royals return home on Friday and Saturday for a two-game set against the BC Division leading Kamloops Blazers. Friday’s contest is Eco Night, while Saturday’s game is the team’s first ever Tech Night. Puck drop for both games is at 7:05 p.m. Tickets can be purchased in person at the Select Your Tickets box office, over the phone by calling 250-220-7777, or online at www.selectyourtickets.com.