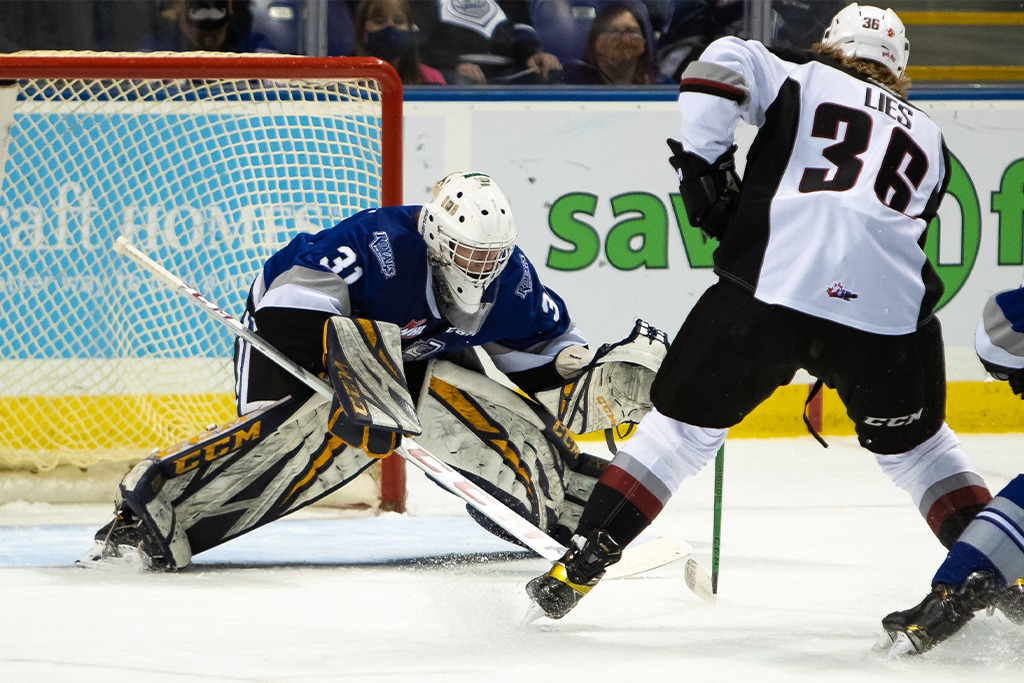 The Victoria Royals fell 5-0 to the Vancouver Giants during the home opener presented by Evo Car Share in front of a sold-out crowd.

It has been quite a while since the Save-on-Foods Memorial Centre opened its doors to the public for a Royals game, so it’s no surprise the place was abuzz for the first game of the regular season.

The Royals opened the game with a special thank you to Victoria’s essential workers for all their efforts and selflessness throughout the pandemic. The team welcomed over 30 guests, police officers, doctors, local business owners and more to centre ice to thank them for their services and presented them with a Royals jersey.

After a moment of silence to recognize National Truth and Reconciliation Day, the Giants and Royals took the ice to get the Evo Car Share home opener started. Both teams came out of the gate with high intensity, ready to start the season off on the right foot. It was Vancouver’s Justin Sourdif who got the first goal of the evening at 4:29 with a snipe just past the blueline. The Giants were full of steam from the first goal and would get a second at 6:57 by Adam Hall off a rebound. After a third goal from Giants Connor Horning at 7:24, Head Coach Dan Price, pulled goaltender Sebastian Wraneschitz and sent in rookie Tyler Palmer to sit between the pipes. The Giants would get one more from Payton Mount at 12:38 taking their lead up 4-0 at the end of the first.

The second period started with the Giants leading 18-6 in shots with no signs of slowing down. Royals goaltender Tyler Palmer made several critical saves that would keep the score at 4-0. Tensions were high in the middle of the second with the newest member of the Royals Bailey Peach taking a four-minute minor at 14:09 for high-sticking while Giants forward Justin Sourdif earned himself a four-minute minor for roughing and a game misconduct. The Royals penalty kill worked hard during the second fighting off multiple penalties to keep the Giants off the board in the second.

After 40 minutes of play and a score of 4-0, the Royals came into the third looking to get something past Giants goaltender Jesper Vikman. Despite their best efforts and multiple shots on goal, the Royals were unable to get on board. With one minute left in the third period, the Giants made it 5-0 with a goal from Mazden Leslie, which would be the final score of the game.

“There was great energy in the building,” said GM and Head Coach Dan Price. “We had all those chances early on and just never got a chance to explode because so many just missed. There were a couple of big saves by Vikman, a couple that just missed the net and a couple of close crossbars. If we had got one early, I think it would have been a much different story.”

The three stars of the night were Giants Connor Horning, Royals goaltender Tyler Palmer, and Giants goaltender Jasper Vikman.  Both Palmer and Vikman were truly incredible in their own crease.

“Tyler played really well and so did Vikman in the other end,” Price said of both goalies.  “Vancouver played really well, but they really needed Vikman and at times when we broke down and Vancouver made some good plays, we were leaning on Palmer. It was two good goalies going at it.”

The Royals take on the Rockets in a double header next Friday and Saturday at the Save-on-Foods Memorial Centre.  Tickets for both games are available at victoriaroyals.com/tickets.