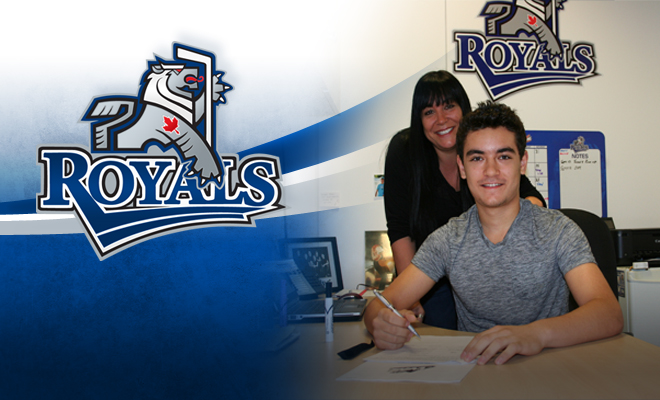 Victoria, BC –The Victoria Royals are proud to announce that the club has signed forward Dante Hannoun (ha-NOON) to a Western Hockey League (WHL) Standard Player Agreement.

Hannoun was selected by the Royals with the club’s first round, 11th overall, pick in the 2013 WHL Bantam Draft. The 5-6, 145 lb forward was recently shortlisted for Team BC’s Under-16 team in advance of the 2013 Western Canada Under-16 Challenge Cup. Hannoun will suit up for the Greater Vancouver Canadians of the BC Major Midget Hockey League during the 2013-14 season.

“We are very pleased to have signed Dante,” Royals’ General Manager Cameron Hope said. “Dante is a dynamic and intelligent hockey player. We are excited to move into the future with Dante as a part of our team.”

The Delta, BC native spent the 2012-13 season as the captain of the North Shore Winter Club Hawks of the Pacific Coast Bantam Hockey League (PCBHL). With North Shore, Hannoun racked up 151 points (63g-88a) and 46 penalty minutes in 63 games played last season in addition to a plus-114 rating. Hannoun helped lead the Hawks to the 2013 BC Provincial Bantam Tier 1 Championship and a silver medal at the 2013 Western Canada Bantam Championship. Hannoun also helped the Hawks to a gold medal at the John Reid Memorial Tournament where he notched 11 points (6g-5a) in six games. Selected to participate in the 2013 Under-16 BC Cup, Hannoun notched one goal for Team Flyers en route to the BC Cup title.

We are Royal Blue, are you? 2013-14 season tickets, mini-plans, and individual tickets are now on sale! Guarantee yourself the best seats at the best prices by calling 250-220-7889, visiting www.victoriaroyals.com, or heading down to the Royals ticketing office at the Save-On-Foods Memorial Centre.