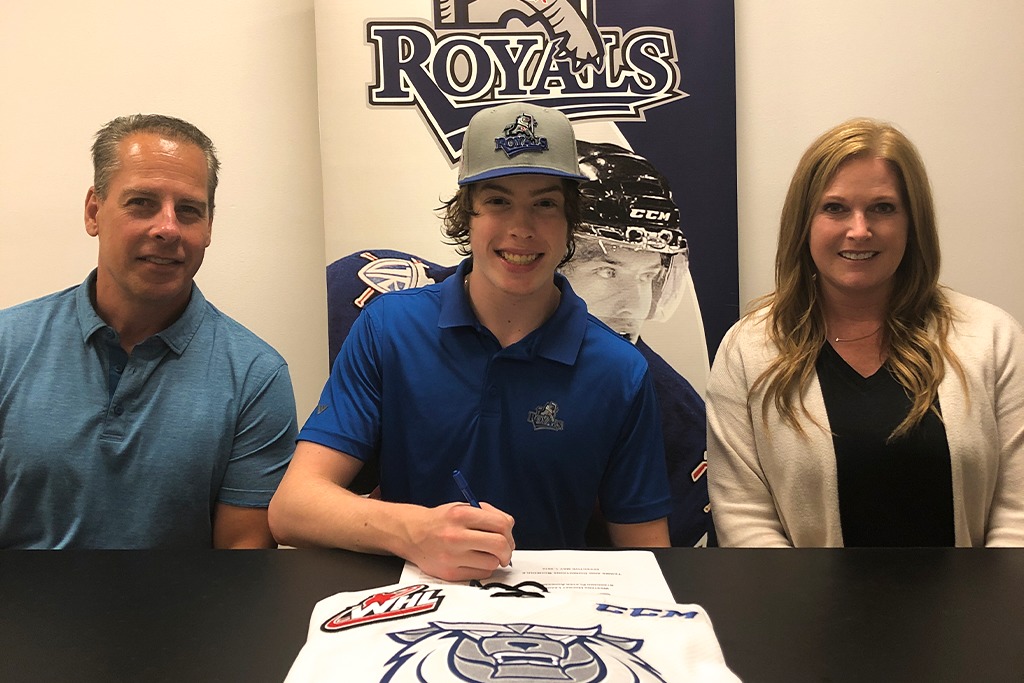 Logan Cunningham came to the Royals rookie camp knowing he’d have to play some of his best hockey to become a signed Royals prospect and that’s exactly what he did. After seven days of hard work, practice and scrimmages, the 2005-born goaltender was signed by the Royals to a Standard Player Agreement.

The netminder first caught the attention of Royals scouts in viewings for the 2020 WHL Bantam Draft. His athleticism and focus, ability to find pucks in traffic and size (6’1 181lbs) put Cunningham on the list of goalies to target for selection.

“Logan has a tremendous work ethic and his game has been developing steadily. He is a quality person and is very competitive in the net,” GM and Head Coach Dan Price said. “He handles traffic well and one of his greatest strengths is being square to the puck when it arrives. It’s clear that he has worked hard to develop these qualities in his game. We look forward to working with him and being part of his growth and evolution.”

The Sherwood Park native spent one season with the Sherwood Park Sabres of the Northern Alberta Hockey League (NAHL) before joining the Northern Alberta Xtreme (NAX) of the Canadian Sport School Hockey League (CSSHL). In just two seasons with the Xtreme, Cunningham had made a name for himself, particularly in 2019-20 when he finished the season ranked third in the league amongst netminders in wins (14) and fifth in both GAA (2.95) and SV% (.901).

“He’s put in a ton of hard work. It’s been paying off for him and hopefully it will continue to pay off,” Logan’s mother Kimberly said, and she was right. Last week, Logan signed a WHL Standard Player Agreement with the Royals, a moment he’s been looking forward too.

Cunningham’s work ethic and drive have been a large part of why he’s made it as far as he has. “He’s been an easy kid to have. He put the burden on himself and just went with it,” his father Kevin said.

That determination will help Cunningham continue to grow within the Royals organization so that one day he can be the starting goalie for the team. “I hope to come in and be the guy for the team,” Cunningham said when asked where he sees himself in the next few years. “I want to be the reliable goalie in all situations and hopefully win that championship one day.”