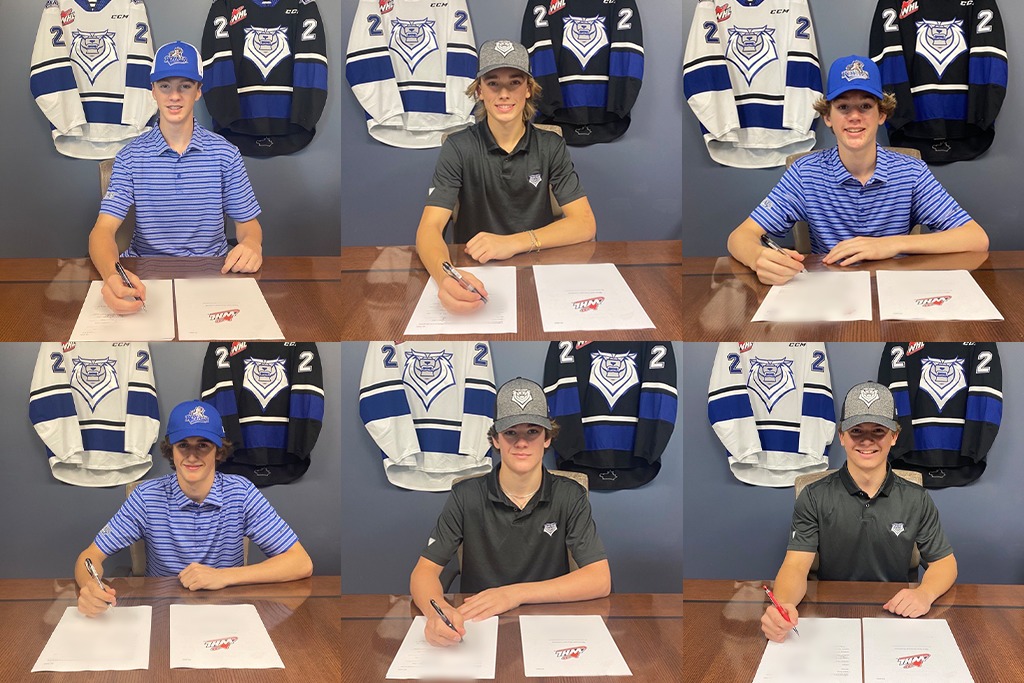 All six players took part in both the team’s Rookie Camp and Main Camp presented by Coast Victoria Hotel & Marina by APA over this past week where they impressed the coaches and scouts with their skill and work ethic on the ice.

This group of new Royals boasts some local talent as well as several prospects from the prairies.

2006-born defenceman Seth Fryer, who was drafted by the club with the 206th overall pick in the tenth round of the 2021 WHL Prospects Draft, is from Victoria.

Standing at 6’6.5”, 190lbs with a right-hand shot, the 16-year-old Fryer is already an imposing presence on the ice. He is set to join the Peninsula Panthers of the Vancouver Island Junior Hockey League (VIJHL) for the upcoming season, where he will play alongside his older brother Reid Fryer. Seth played his 2021-2022 season with Pacific Coast Academy U16 Prep, where he recorded 17 points on one goal and 16 assists over 36 contests.

“Certainly, Seth is noticeable on the ice with his reach and athleticism,” said General Manager and Head Coach Dan Price. “But it’s what he does with his tools that is most important. He works hard at his game and is highly coachable. He plays the game with awareness, intelligence and competitiveness. He contributes on both sides of the puck and above all he’s a good person.”

Also joining the 2006-born age group is Deegan Kinniburgh, a forward out of Taber, AB who was originally drafted by the Royals with the 197th overall pick in the ninth round of the 2021 WHL Prospects Draft held last December.

The 16-year-old spent last season playing for the Lethbridge Hurricanes U16 AAA team where he recorded 38 points (13 goals, 25 assists) in 30 games while serving as team captain. Kinninburgh stands at 6’0”, 159lbs and is a left-hand shot.

“Deegan quickly emerged during camp as a versatile forward who plays with both speed and power,” said Price. “He knows where to be on the ice and he’s extremely vocal, which are valuable attributes. He’s a smart player and a quality individual who fits in very well with our culture.”

Caleb Matthews, from Calgary, AB, stands at 6’0”, 148lbs and was a fifth-round selection (79th overall) by the Royals in the 2022 WHL Prospects Draft.

The 15-year-old, right-shooting forward already displays impressive offensive instincts, having led his Calgary Bisons U15 AAA team in scoring with 59 points on 18 goals and 41 assists during the 2021-2022 season.

“Caleb is an explosive player who can distribute the puck just as well as he can shoot it,” said Price. “He’s a very humble and respectful young man while being highly competitive and tenacious on the ice. He contributes in all areas of the rink and is very consistent in his work ethic and preparation.”

The first 2007-born defenceman to join the Royals’ blueline is Jerrett Ross, who was selected by Victoria 79th overall in the fourth-round of the 2022 WHL Prospects Draft this past spring.

The Leduc, AB native measures in at 5’11.5”, 145 lbs and is a left-hand shot. Ross played his 2021-2022 season with the Leduc Oil Kings U15 AAA team, where he tallied 15 points (three goals, 12 assists) in 34 games. He also got some experience playing a level up, appearing in six games for the Leduc Oil Kings U16 AAA squad, where he counted two points on a goal and an assist.

“‘Balanced,’ ‘smart’ and ‘aware’ are some of the descriptors that come to mind when we watch Jerrett play,” said Price. “He drives offence from the back end with his mobility and creativity, and he also has a sound defensive game. Those attributes, combined with his quality of character, make him a great fit in Victoria.”

“Royals fans will notice right away that Dylan is a relentless player who loves to battle and who goes to the net hard,” added Price. “Plus, he’s got a very good mind for the game and quickly creates chemistry with his linemates. He has a real presence and we’re excited to coach him because he is a quality person.”

“Ethan sees the game in multiple dimensions, and in unique and creative ways,” added Price. “He works extremely hard both with and without the puck, and his speed and shot are dynamic. He’s mature beyond his years both as a player and as a person, and we’re proud that he’s chosen the Victoria Royals to partner with him in his development.”

Royals continue road trip with battle against Rockets
15 hours ago