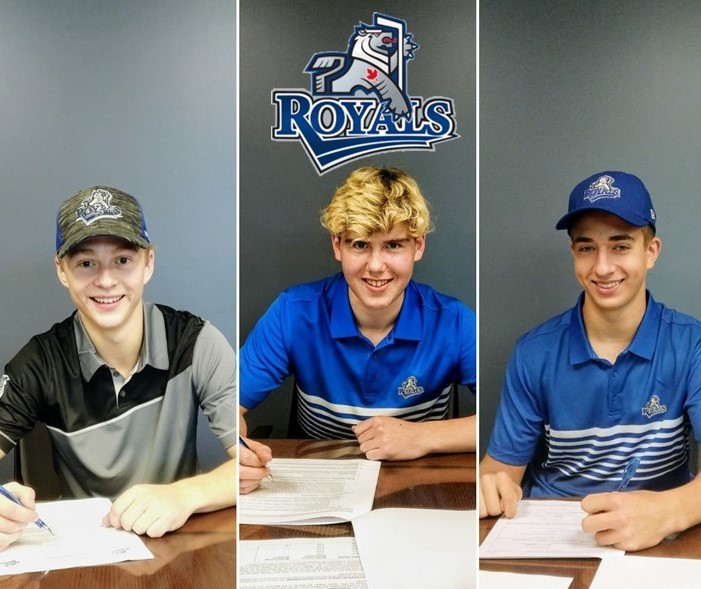 Victoria, BC – The Victoria Royals are proud to announce that the club has signed forwards Carter Dereniwsky (2004) and Carter Briltz (2004), along with defenceman Gannon Laroque (2003) to Western Hockey League Standard Player Agreements.

The native of Canora, SK was selected by the Royals in the second round, 39th overall, in the WHL Bantam Draft this past May.

“Carter is an intelligent and gifted forward who has had a very good training camp,” President and General Manager Cameron Hope said. “We look forward to watching Carter develop and are excited to have him and his family join our organization.”

The 5-9, 148 lb forward spent last season with the Yorkton Maulers of the Saskatchewan Midget Hockey League (SMHL). In 41 games with the Maulers, Dereniwsky registered 25 points (8g-17a) and 36 penalty minutes, as an underage player. In seven playoff contests, Dereniwsky tallied four goals. He was also selected by his coaches as the team’s most valuable player and rookie of the year.

“Carter is a strong and smart forward who continues to impress at training camp. His hard work and dedication are paying off,” Hope said. “He seems to improve with every game. We are happy to welcome him to the Royals’ family.”

The product of Regina, SK spent the 2018-2019 campaign with the Regina AA Aces of the Saskatchewan Bantam AA Hockey League. In 30 games, Briltz finished with 51 points (27g-24a) and added 42 penalty minutes. Briltz’ point total ranked him second in team scoring during the regular season, while he also finished in a tie for the club lead in goals.

The 6-2, 196 lb defenceman was listed to the Royals’ 50-man protected player list last summer. Each WHL team is allowed to protect 50 players, which includes individuals who have either been signed, drafted or listed by their respective club.

“Gannon is a developing two-way defender who has had another good training camp with us,” Hope said. “He has shown exceptional progress over the past season and continues to elevate his game. We are pleased to have him join our organization.”

The Edmonton, AB native spent the 2018-19 campaign with the Northern Alberta X-Treme Elite 15’s of the Canadian Sports School Hockey League (CSSHL), where he helped the team capture the Elite 15 Division Championship. Over 34 contests with the club, the 2004-born blueliner collected 34 points (10g-24a). Laroque also spent three games with the Northern Alberta X-Treme Bantam Prep team of the CSSHL.

The Royals will conclude their training camp tomorrow with their annual intra-squad game at 7:05 p.m. Admission to the contest will be by donation with general admission seating, while hot dogs, popcorn and pop will be available for only $2.00 each.