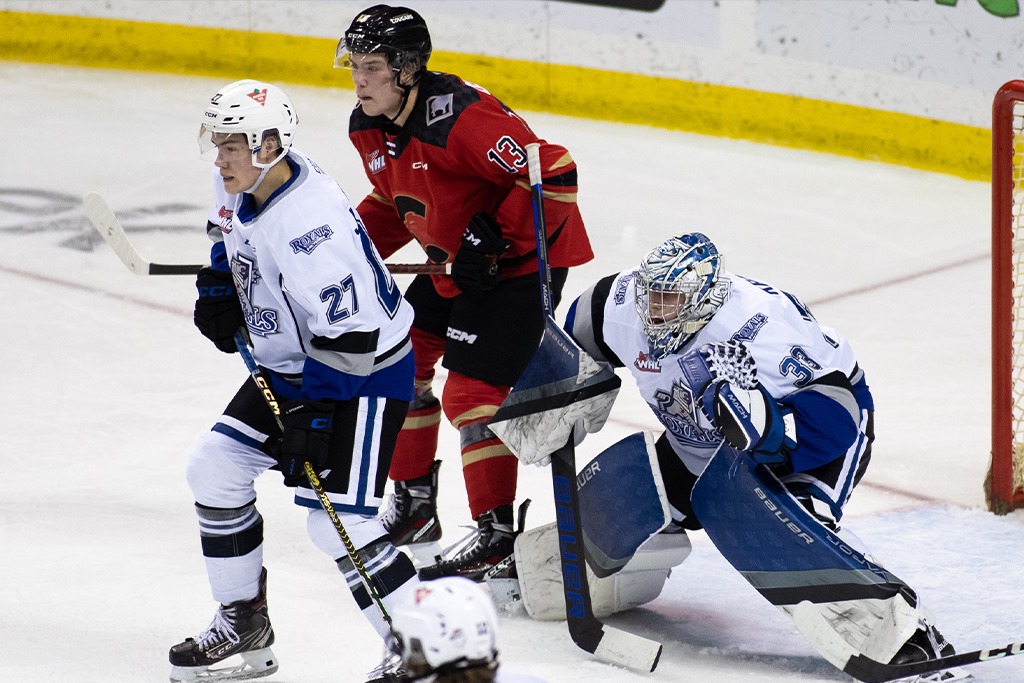 Forwards Grant Reid and Alex Thacker both played their first games in a Victoria Royals uniform in a 9-1 loss to the Prince George Cougars on Friday night.

It was the major junior debut for the 15-year-old Reid, who was  selected by the team with the 47th overall pick in the third round of the 2022 WHL Prospects Draft.

Head Coach Dan Price was impressed with what he saw from the young forward in his first WHL game:

“He’s going to be a good one,” said Price postgame. “You can see his vision, you can see his patience, you can see the way he passes the puck. He’s a calm, smart, cerebral player that can play centre or wing…We love him, he’s such a great guy too.”

It was not the first WHL game for the 20-year-old Thacker, however, who was acquired by the Royals in a trade with the Lethbridge Hurricanes earlier this week and arrived in town less than 24 hours before making his debut for Victoria on Friday.

Price is excited to see what the veteran forward can bring to the team:

“You see how dangerous he is,” said Price. “He can fly, has great vision, is an unbelievable playmaker, he’s a great penalty killer, can go to the net. He’s also a great leader and a great person, we’re thrilled to have him.”

Forward Jake Poole recorded the lone goal for the Royals in the defeat, marking the fourth straight game where he has found the back of the net at least once. The McAuley, MB product leads the team with 19 points (12 goals, 7 assists) in 19 games this year.

Starting goaltender Logan Cunningham would finish the game with 14 saves on 19 shots prior to being replaced in the second period by backup Jayden Kraus, who would stop 17 of 21 for the remainder of the game.

Defenceman Hudson Thornton was the top performer for Prince George in the win, recording a game-high six points on three goals and three assists.

Forward Riley Heidt also put in a big performance, logging three assists, while starting goaltender Ty Young stopped all but one of the 22 shots he faced.

Forward Caden Brown (4) would then double-up the Cougars’ lead at the 13:30 mark, which would be followed by yet another goal near the end of the frame, with Prince George forward Keaton Dowhaniuk (1) striking at the 17:44 mark to put his team up 3-0 heading into period two.

Momentum would remain in the Cougars’ favour as the game entered the second, with their lead quickly growing to 3-0 on a powerplay marker by forward Chase Wheatcroft (15) at 0:40 of the frame.

Victoria (3-15-3-0) would eventually get on the board and break the shutout with a goal by Jake Poole at 18:16 and the game would head to the third with the Cougars up 6-1.

Forwards Reggie Newman and Teague Patton would collect assists on the play.

The Cougars would add three more in the third, with Cole Dubinsky (6) scoring at the 0:25 mark and Keaton Dowhaniuk (2) collecting his second of the night at 10:54 to bring the score to 7-1.

Defenceman Hudson Thornton would then complete the hat trick with his seventh goal of the season at the 14:30 mark to make it 9-1 where it would stand at the final buzzer.

The Royals and the Cougars will reset for the second half of a two-game weekend series, with puck drop set for 6:05 pm at the Save-On-Foods Memorial Centre on Saturday, Nov. 19.

Discounts for military members will be made available, including 25% off buffet prices all month at the Lion’s Den Restaurant when booked online with a valid military ID.

Multiple ticket packages are available for purchase, including a Family Pack, Holiday Pack, VictoriaNow Family Section and Molson Ice Seats. Call our ticket office at 250-220-7889, send an email to tickets@victoriaroyals.com or visit our website to learn more victoriaroyals.com/ticket-promos.