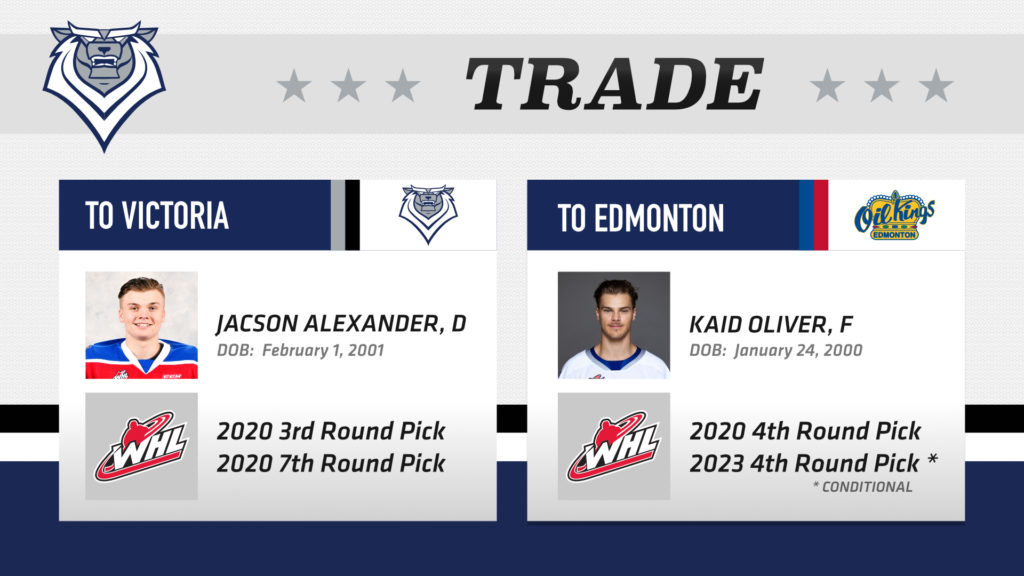 Victoria, BC – The Victoria Royals today announced that the club has acquired 2001-born defenceman and Victoria, BC product Jacson Alexander, along with a third and seventh round selection in this Wednesday’s WHL Bantam Draft in a trade with the Edmonton Oil Kings. Headed to Edmonton is 2000-born centre Kaid Oliver, a fourth round pick in this year’s draft and a conditional fourth round pick in 2023.

The product of the Victoria Racquet Club Minor Hockey Association was limited to 13 games with Edmonton this past season due injury and recorded six points (1g-5a) and two penalty minutes.

The 5-10, 182 lb blueliner has skated in 60 career WHL games split between the Oil Kings and Swift Current Broncos and has registered five goals and 11 assists, to go along with 14 minutes in penalties.

During the 2018 WHL Playoffs, Alexander collected an assist in 26 games for the Broncos as they captured the Ed Chynoweth Cup as league champions.

Alexander was originally selected by Swift Current in the first round, 17th overall, in the 2016 WHL Bantam Draft.

Oliver departs Victoria after having played in 234 career regular season games over four seasons with the club. This past season, Oliver collected 22 goals and 25 assists in 51 games and for his career has amassed 128 points (57g-71a). In the post-season, Oliver has played in 15 career contests and has tallied two points (1g-1a).

“We thank Kaid for having been such an important part of the Royals family over these past four years,” President and General Manager Cameron Hope said. “His energy and dedication to our organization, and to our community, will certainly be missed. We wish him every success.”

The White Rock, BC product was originally drafted by Victoria in the third round, 57th overall, in the 2015 WHL Bantam Draft.