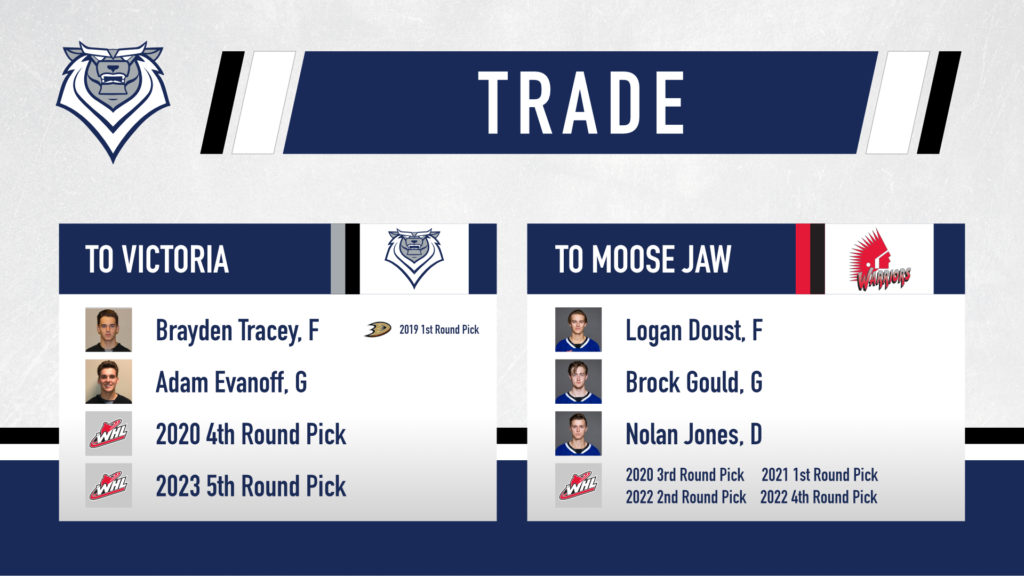 A native of Calgary, AB, Tracey has recorded 38 points (15g-23a) and 39 minutes in penalties in 28 games for the Warriors. In November, the 6-0, 176 lb forward was a member of Team WHL at the CIBC Canada Russia Series, where he collected an assist in two contests.

“Brayden is a dynamic and skilled forward who can provide offense at an elite level in the WHL,” Royals’ President and General Manager Cameron Hope said. “There are few opportunities to acquire a player with Brayden’s skill set, and he will be a great addition to our forward group going into the playoffs.”

Last season, the Moose Jaw assistant captain tallied 36 goals and 45 assists to go along with 28 penalty minutes in 66 games with the Warriors. At the end of the season he received the Jim Piggott Memorial Trophy as the WHL Rookie of the Year.

The 2001-born forward was selected by the Anaheim Ducks in the first round, 29th overall in the 2019 NHL Entry Draft.

Tracey was a first round pick, 21st overall, by Moose Jaw in the 2016 WHL Bantam Draft.

A product of North Vancouver, BC, Doust has collected nine points (2g-7a) in 36 games for Victoria this season. The 6-0, 185 lb forward has played in 99 career WHL games with the Royals and Saskatoon Blades and recorded eight goals and nine assists.

The 2001-born Doust was originally drafted in the ninth round, 198th overall, by Saskatoon in the 2016 WHL Bantam Draft.

The 6-2, 180 lb defender has skated in 30 games for Victoria this season and has tallied a goal and five assists, along with 41 penalty minutes. The native of Moose Jaw, SK has played in 91 career WHL games split between the Royals and the Lethbridge Hurricanes and has posted 19 points (3g-16a) and 90 minutes in penalties.

The 18-year-old was selected by Lethbridge in the second round, 41st overall, in the 2016 WHL Bantam Draft.

The Royals return to the Save-On-Foods Memorial Centre on Friday to kick off a four-game homestand. Victoria will host the CHL’s third ranked team in the Portland Winterhawks tomorrow Saturday. Portland will welcome goaltender Joel Hofer back to their line-up. Hofer is returning from the 2020 World Junior Championships where he helped Canada win the gold medal. The Tri-City Americans will then come to town for a pair of games on Tuesday, January 14th and Wednesday, January 15th. Puck drop for all four games is scheduled for 7:05 p.m. Tickets can be purchased in person at the Select Your Tickets box office, over the phone by calling 250-220-7777, or online at www.selectyourtickets.com.